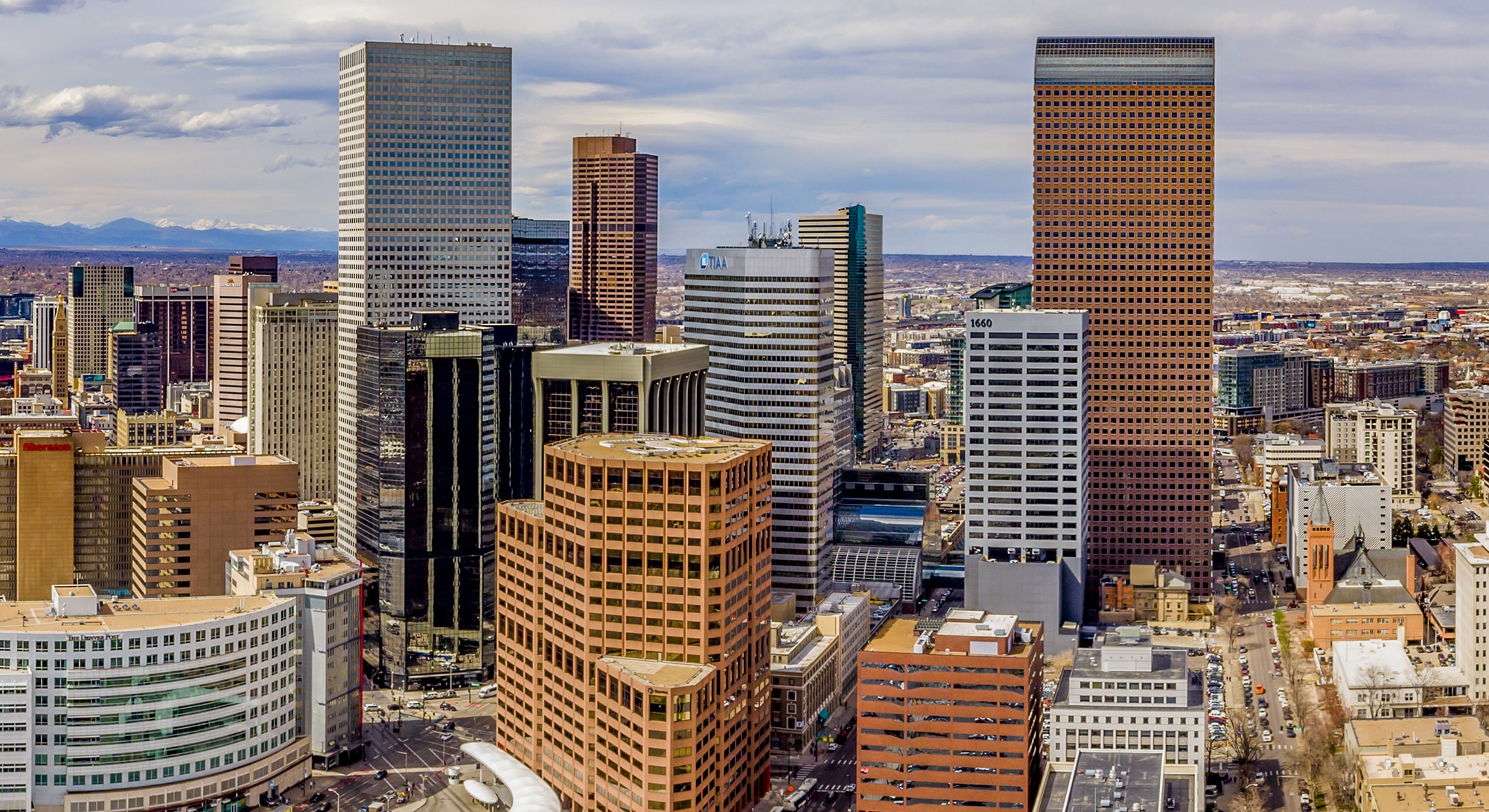 Republic Plaza, at left, and the Wells Fargo Center are the two tallest buildings in this drone photo showing downtown Denver. (Courtesy of Guerilla Capturing)

Higher interest rates and the lingering effects of the pandemic have caught up to two marquee office towers downtown.

The loans secured by both Republic Plaza and the Wells Fargo Center, two of the tallest towers in Denver and landmarks on the skyline, have entered special servicing in recent months — a sort of “purgatory,” according to one analyst, that can at times lead to an owner relinquishing the keys to a lender.

The 56-story Republic Plaza at 370 17th St. is the tallest building in Denver. The 52-story Wells Fargo Center, two blocks away at 1700 Lincoln St., is the city’s third-tallest and one of the most recognizable thanks to its cash register-like crown.

Both structures date to the early 1980s and are owned by New York-based Brookfield Properties, which declined to comment for this story.

Brookfield has owned Republic Plaza since the early 1990s, public records indicate. The company announced in 2014 it was selling a 50 percent stake in the building to MetLife in a deal valuing the structure at $480 million.

Brookfield purchased the Wells Fargo Center in 2020 from Boston-based Beacon Capital Partners. The deal was structured in such a way that the sales price wasn’t made public; Beacon paid $387.5 million for the property in 2012, records show.

Commercial property loans differ from those issued to a typical homeowner, which generally have a fixed rate for a 30-year term. Commercial loans run for shorter periods, and aren’t set up to be paid off by the end of that period. Owners often borrow as much as they can against an asset. 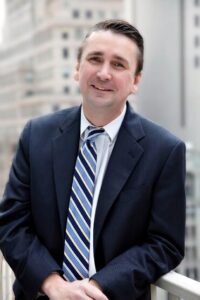 Special servicers are essentially negotiators brought in when a lender gets concerned about an asset, generally because an owner is missing payments or fails to pay off a loan when it matures. The loss of a major tenant can also put a building in special servicing.

In the case of Republic Plaza, the building’s $243 million loan matured in December, according to Trepp. Brookfield needed to pay off the loan in full, which owners often do by securing a new loan, but failed to do so. The interest rate on the loan is 4.24 percent, according to data on CoStar.

Brookfield has a $277 million loan, meanwhile, backed by the Wells Fargo Center, according to Clancy. That loan was made in 2019, and set to mature two years later, with multiple extension options. In 2021, Brookfield extended the loan to 2022, but that maturation date came and went.

“They in theory could have extended to 2024, but thus far have not,” Clancy said.

The interest rate on the Wells Fargo Center loan is 5.4 percent, per CoStar.

Clancy said there are two possible outcomes of the special servicer process.

The first: A special servicer and borrower agree to modify the loan in some way. For instance, the lender might agree to give the owner an extension on the original loan in the hopes that additional tenants can be secured, in exchange for the owner agreeing to put up money to renovate the building to attract new companies.

The second: the owner decides to cut its losses and walk away from the property, losing whatever equity it has in it. 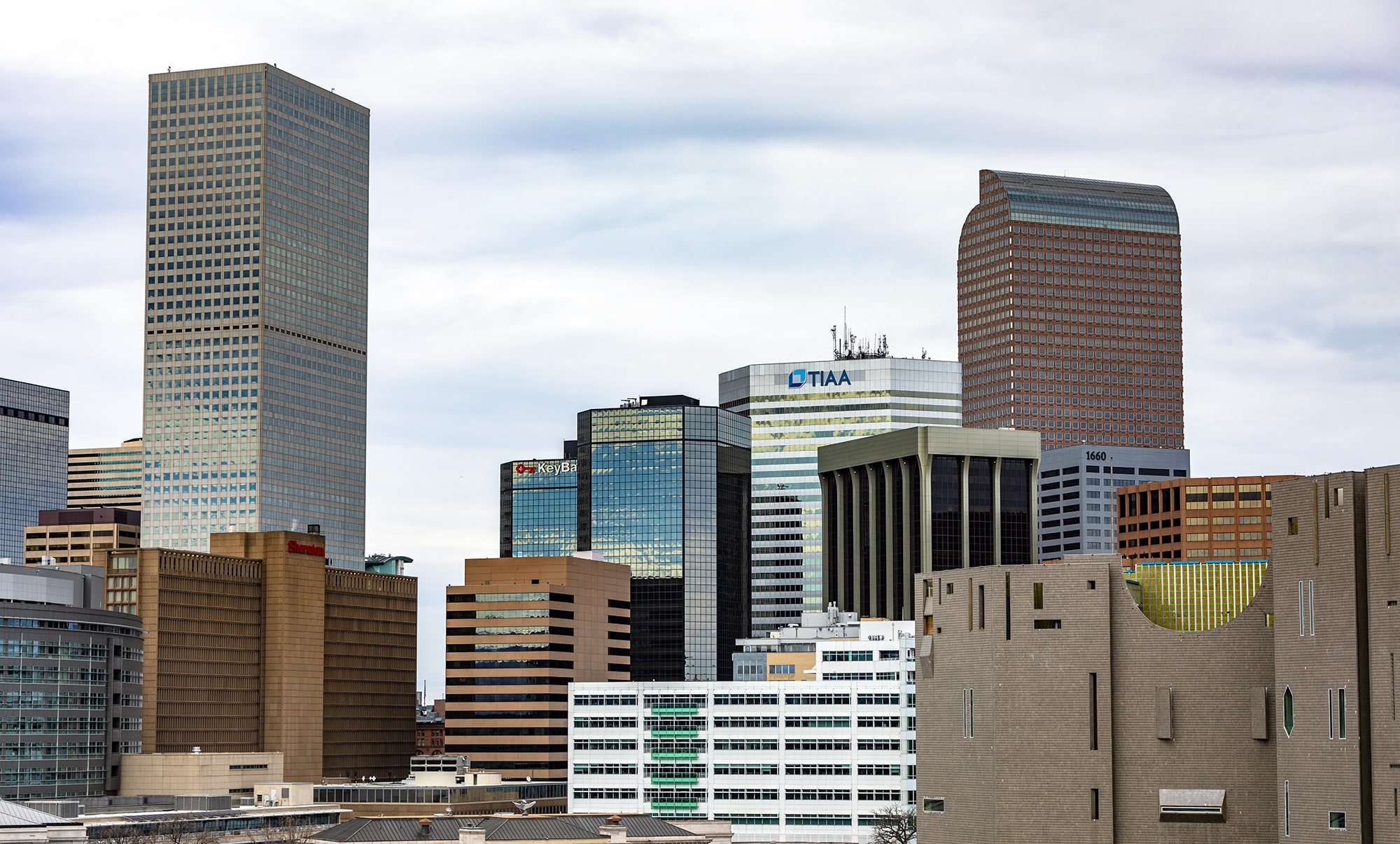 A view of the downtown skyline from the Golden Triangle neighborhood. (Courtesy of Guerilla Capturing)

Republic Plaza has 1.3 million square feet of office space and is 79 percent leased, according to Clancy, who called that “okay, but not great.” That figure is poised to drop in the future. Current tenant DCP Midstream, which leases about 170,000 square feet, is moving to the Denver Tech Center. And the figure doesn’t account for companies trying to sublease their space; CoStar shows about 500,000 square feet total available for rent in the building.

Wells Fargo Center, meanwhile, is about 80 percent leased, according to a source familiar with the 1.2-million-square-foot building. Tenants include Wells Fargo, WeWork and Chord Energy, formerly known as Whiting Petroleum.

The two buildings aren’t the only ones in Denver to falter recently. Last year, the Denver Energy Center office complex, twin 28- and 29-story towers at 1625 and 1675 Broadway, sold to its lender at a foreclosure auction. No one else bid.

“Every city has two or three of these,” he said.

A combination of factors have led to headwinds for commercial property owners who have a loan coming due. First, interest rates have surged over the past year thanks to actions taken by the Federal Reserve. “The interest rates are higher than probably what was expected when the loans were written,” said Mike Kercheval, executive director of the Real Estate Center at CU Boulder’s Leeds School of Business.

Additionally, the pandemic has prompted many companies to downsize the amount of office space they lease. That has pushed the value of office towers down, making it less likely an owner can sell at a high price when a loan is coming due.

And Clancy said that lenders know that more companies will likely reduce office leases in the future, adding an element of uncertainty that doesn’t necessarily extend to other commercial properties like large apartment buildings.

“People are really concerned about that space right now, and financing is really hard to get,” Clancy said, referring to the office sector.

Over the last 10 years, Clancy said, borrowers often did cash-out refinancing. Now he’s seeing cash-in refinancing, in which owners need to pay money just to secure a new loan for an existing asset.

It may take a while until it is clear which possibility becomes reality at Republic Plaza and the Wells Fargo Center. But Clancy said he thinks it unlikely that Brookfield will walk away from either asset. He said the buildings have strong cash flow, and noted that the debt service coverage ratio for Republic Plaza is a solid 1.3x.

The fact that Brookfield hasn’t extended its Wells Fargo loan to 2024 could be an indication the company will walk away. But Clancy said he thinks it’s more likely that the company currently fails to meet some criteria allowing it to easily extend, and that an extension could be granted through special servicer negotiations.

“I’d be surprised if the borrower said, ‘We’re done here. Here’s the keys,’” Clancy said, although he cautioned he was speculating.

Kercheval, who worked in loan originations and modifications and led the world’s largest commercial real estate trade association before joining CU, also said he expects Brookfield will be able to work out a deal.

“Lenders don’t want to own the building,” he said. “They’re looking for cash flow.” 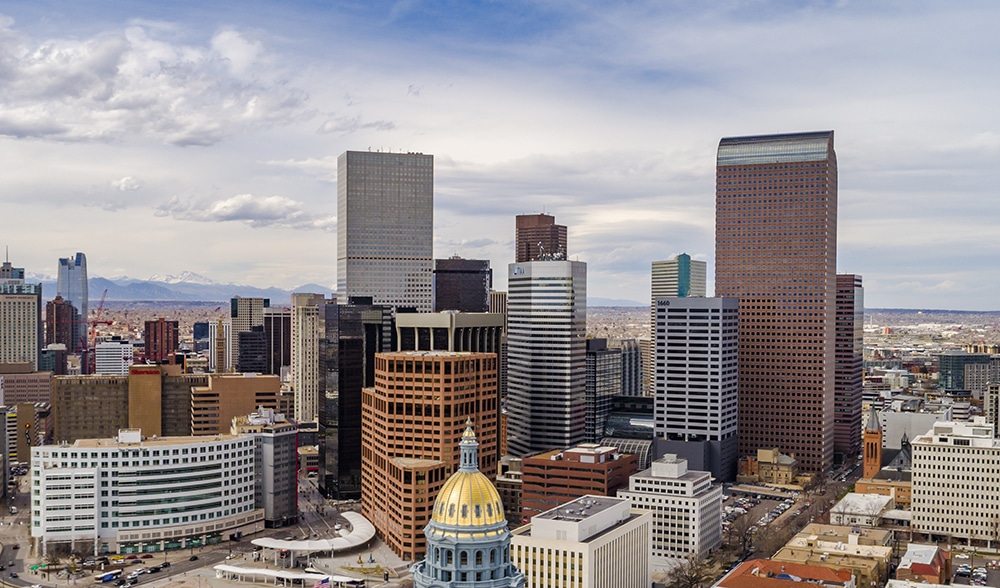 A view of downtown Denver from above the Capitol building. (Courtesy of Guerilla Capturing)

Brookfield does occasionally walk away from properties, however. The company bailed on the Water Tower Place mall in Chicago last year, according to Crain’s.

In Denver, Brookfield also owns the 29-story Johns Manville Plaza building at 717 17th St., the 42-story building at 707 17th St. and a 49 percent stake in the 54-story 1801 California, which is the city’s second-tallest building. The company also co-owns the Clayton Lane development in Cherry Creek, which is being shopped around.

Republic Plaza and the Wells Fargo Center are both located in Upper Downtown, the portion of the city center that generally has older office buildings, greater vacancy and more unoccupied storefronts. McDonald’s and T.J. Maxx recently closed locations there that had operated for decades.

Numerous other office buildings downtown have a higher vacancy rate than Republic Plaza and the Wells Fargo Center. The Link at 1490 Curtis St., for example — although much smaller at 12 stories and 224,000 square feet — has failed to land an office tenant in the two years since its owner completed a massive overhaul. The 24-story, 275,000-square-foot Denver Club building at 518 17th St. was just 31 percent occupied when it went up for auction last year and sold for $14.5 million, or $52.80 per square foot.

“We probably are going to see more of this,” Kercheval said.

Republic Plaza, at left, and the Wells Fargo Center are the two tallest buildings in this drone photo showing downtown Denver. (Courtesy of Guerilla Capturing)

Higher interest rates and the lingering effects of the pandemic have caught up to two Brookfield buildings.