It sure seemed like 2017 was the year for getting off-grid in a locally made rig.

Foregoing traditional RVs, Coloradans this year more than ever seemed to be searching for the unique vehicles that could withstand rough roads to get to the most remote places. And, if they couldn’t find it, they’d build it themselves.

From the $1.5 million EarthRoamer to vintage teardrops to retro firetrucks, here is a review of BusinessDen’s favorite camping vehicles. 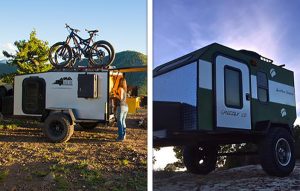 Into the Wild Overland

Into the Wild Overland campers come with their own independent suspension and all-terrain wheels, designed specifically for getting away from the campground. Owner Matt Reichel makes them in Arvada, and he said his back-hatch kitchen–which includes a fridge and sink–sets him apart from other rugged campers.

The owner of Grand Junction-based Vintage Overland, Britton Purser, doesn’t have to look hard to find materials for his 1950s-esque trailers; he sources everything but the axles from the Western Slope. The Colorado native makes two models of his rugged heirloom teardrops: one big enough for a full-sized bed and one for a queen. 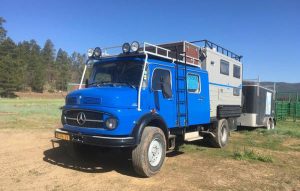 Nicknamed after the “Kill Bill” actress, this tank of a vehicle is a refurbished Dutch firetruck from the ‘70s with a camper placed on its second half. Listed on Craigslist this fall, the vehicle’s owner said it withstood rough trips around Moab and Colorado–not to mention previous trips in the Amazon and Africa.

Colorado Camper Vans, based in Loveland, can take a normal van and transform it into an adventure tank. The owner starts by cutting the top off the vans and replacing it with a popup tent or room for extra storage, then outfitting each remodel with kitchen sinks, refrigerators or other add-ons. 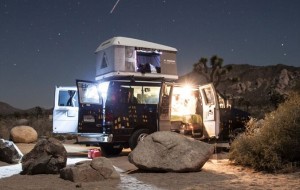 Not feeling like pouring funds into owning an adventure rig? Rent a van with a snazzy paint job from Escape Campervans for a night or two. The Los Angeles-based rental van company opened an outpost in Denver this year, conveniently located off the Colorado A-line for out-of-town visitors coming from the airport.

Not to be trifled with, Earthroamer’s beastly new model is built on a Ford F-750 and feels as luxurious as it is big. Complete with in-floor heating, washer and dryer, the Earthroamer also comes with a tile shower, marble countertops and two TVs.

It sure seemed like 2017 was the year for getting off-grid in a locally made rig.

Foregoing traditional RVs, Coloradans this year more than ever seemed to be searching for the unique vehicles that could withstand rough roads to get to the most remote…