For sale this week: a camper with enough horsepower to spark an action film franchise.

Sean Miller’s firetruck-turned-campervan has seen terrain so rough – road trips in four continents, outings from Denver to Moab and plenty of miles in between – the original owners nicknamed it Uma. Miller kept the name to honor actress Uma Thurman’s revenge-fueled rampage in a Quentin Tarrantino martial arts saga.

The blue 1978 Mercedes Benz 911 L, listed for $37,000 on Craigslist, was converted from a firetruck into a camper by a couple in the Netherlands. They chopped off the back section of the vehicle that contained fire hoses, ladders and other equipment and welded a refrigerator box directly to the frame to make its living quarters.

Those fixes left space for creature comforts: two queen-sized beds, a sink, a shower, a toilet and mahogany cabinets built in the Amazon rainforest.

When it was all outfitted, Uma’s original owners took it for a spin through three continents, Miller said, clocking miles in Africa and Europe. Later owners took it across the Atlantic to explore South America.

“It’s got a lot of stamps in its passport,” Miller said. 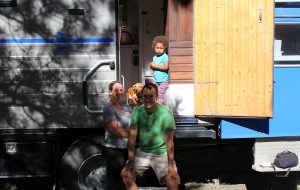 Miller and his family in front of the camper. (Courtesy Sean Miller)

Miller bought Uma for $30,000, taking the rig on shorter hauls to Moab, the mountains and music festivals.

Now Uma and Miller have reached the end of the road. Miller said his family won’t have as much time for adventure and camper maintenance as he heads back to school and his wife prepares for a surgical procedure.

Even though the Mercedes has 130,000 miles under its belt, Miller said, you’d never know it when you get into the driver’s seat.

“It’s an amazing vehicle to sit behind the wheel of,” he said. “The control I have over really rugged terrain is absolutely remarkable.”

The blue 1978 Mercedes Benz 911 L, listed for $37,000 on Craigslist, was converted from a firetruck into a camper and has rolled through four continents.