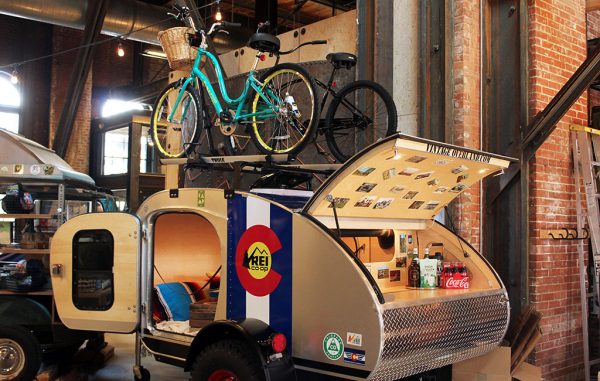 A single teardrop trailer has rolled down into REI.

Vintage Overland parked one of its campers in the outdoor retailer’s downtown Denver store last week. It’s a new marketing tactic for the Grand Junction company, which spent the past two-and-a-half years designing trailers resembling curvy campers from the 1950s and ’60s.

Founder Britton Purser said REI is a prime spot to advertise, since it’s a place where potential customers already shop. He also has a display in a bike shop in Fruita.

“(Our customer is) not someone who would go buy them at an RV shop,” Purser said. “(The caravans are) more of an heirloom-type purchase. We feel the lifestyle brand and lifestyle avenue is something that appeals to our clients and to us, too.”

The REI display is going up just as Vintage Overland hits a milestone. Earlier this year, it expanded into a 1,800-square-foot fabrication space where Purser’s brother builds the trailers. Purser and his wife work out of Vintage Overland’s original location at 350 S. Redlands Road.

The road to building campers started when Purser was a kid. He grew up on a 2,700-acre Colorado ranch without television or electricity in the summers.

“What we did mainly was ride everywhere on motorcycles and build things,” Purser said. “I always have been fascinated by all things with wheels.” 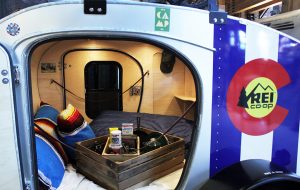 Pursur also developed an affinity for design, and moved to Los Angeles to study the craft. When a motorcycle crash left him couch-ridden for three months, he decided to pursue a less dangerous hobby, and sketched the first blueprint for a teardrop camper.

“It was so well-received that I thought, ‘Maybe I can make one or two for supplemental income,’” Purser said.

That first year, the firm sold 18 campers, and already has matched that number in the first half of 2017.

Vintage Overland trailers are built almost exclusively with material sourced from Grand Junction, except for the axles, which come from Denver. Building each camper takes about six weeks.

Purser is working on introducing two new models next year, one with a kitchenette called the Big Fish.

It's a new marketing tactic for the Grand Junction company, which design trailers resembling curvy campers from the 1950s and '60s.