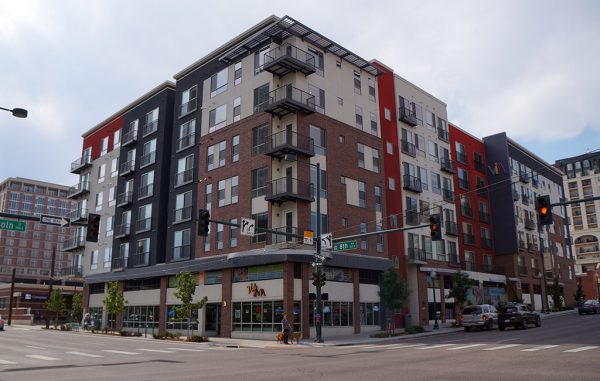 The Via Apartments on the corner of Eighth Avenue and Lincoln Street. (Amy DiPierro)

Denver-based developer Pauls Corporation sold its Via Apartments at Eighth Avenue and Broadway to a private New York investment firm on June 26, city records show. The 200-unit complex is the first Colorado acquisition for Azure Partners.

“We’ve been targeting the Denver metro area for the last three years,” said Azure’s Bryant Ferber. “It’s a great location … We expect there to be a lot of (population) growth in the near term and the long term.”

City records show Azure, acting as Azure Via Modern LP, received a loan from AIG in concert with the sale.

With the Via’s seven stories in hand, Ferber said, Azure is on the lookout for its next multifamily bid in the Denver area.

Terrance Hunt with ARA Newmark represented the seller. Hunt said Via, which came online in 2015, is about 70 percent occupied. The apartments sit on 1.1 acres with 147,000 square feet of rentable space for residences and another 4,200 square feet of ground-floor retail space occupied by a liquor store. Apartments average 746 square feet.

“It was an infill site, a 7-Eleven and some other buildings,” Hunt said. “What they did was assemble a building with visibility on Lincoln, Broadway and Eighth Avenue.”

Hunt fielded around five offers on the complex in the month before it went under contract.

Hunt said average rent is $1,700. However, a leasing agent said that the building is offering two months of free rent for tenants who sign a lease in June.

Via Apartments isn’t the only complex in the neighborhood that is doling out deals. BusinessDen’s survey of 17 large apartment buildings in Denver, conducted in December, found that Golden Triangle apartments like The Acoma and 1000 Speer were discounting rent compared to 2015.

More apartments have come online in the neighborhood since then, including the 270-unit EVIVA Cherokee, which started marketing to potential tenants around the beginning of this year while it was still under construction.

The wave of apartment building in Golden Triangle hasn’t crested yet. Greystar and Legacy Partners are each building projects with 300 apartments or more along Speer Boulevard.

The firm developed 21 Fitzsimons near the Anschutz Medical Campus, a 600-unit multifamily property it sold for $120 million in 2014. It is also working on a 71-unit condo project in Cherry Creek called Laurel at 155 Steele St.

The Via Apartments on the corner of Eighth Avenue and Lincoln Street. (Amy DiPierro)

The 200-unit Via Apartments at Eighth Avenue and Broadway were sold to a private investment firm on June 26.