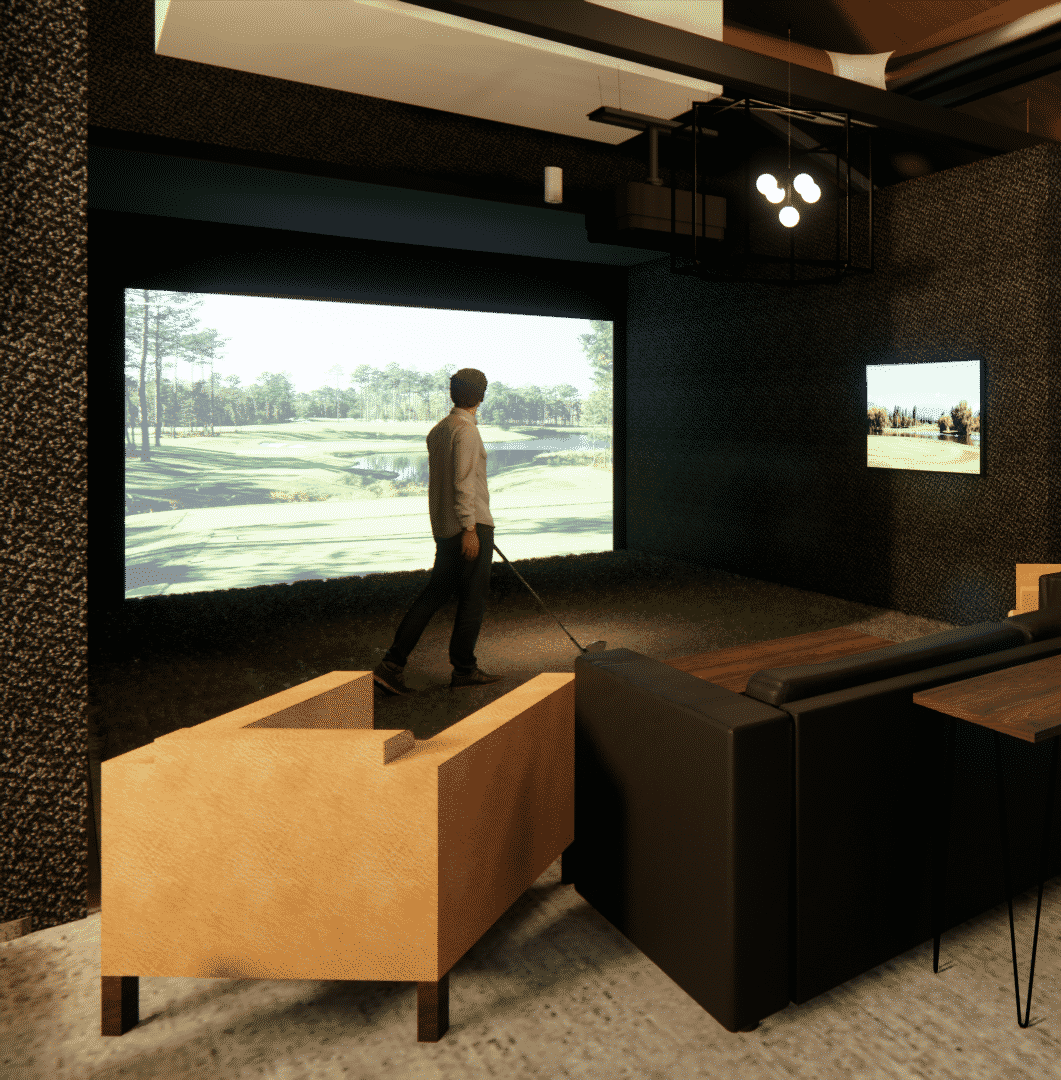 There will be two TrackMan simulators with 15 x 20-foot bays at The Back Nine in RiNo and at One Shot Back less than a mile and a half away. (Courtesy of Frontline Design & Development)

Two more golf simulator bars are opening in Denver, adding to a trend that kicked into high gear locally in 2020.

The Back Nine at The Walnut Room in RiNo and One Shot Back in Ballpark will compete with about a half dozen similar establishments that either opened or leased space in Denver last year.

The Back Nine at The Walnut Room

When concerts died down during the pandemic, Jonah Munson and Leslie Odell, co-owners of the Walnut Room, decided to reevaluate the use of the restaurant’s backroom.

The restaurant at 3131 Walnut St. in RiNo had been using its 1,500-square-foot backroom as a music venue since The Walnut Room opened in 2005.

“The venue can fit about 140, so we weren’t able to use it much if at all during COVID, and trying to get bands booked was rough,” Munson said. “But we’ve been doing it for 16 years, and had some great music in here. Lately, there was just a lot of competition. After two years of it being left empty, we decided to do something different.”

Now, the co-owners are planning to reopen the space as The Back Nine, a golf simulator bar, on Jan. 17. And they’ve brought on Kevin Lind, who previously sold beer to The Walnut Room, to be a co-owner of the new arm of the business. 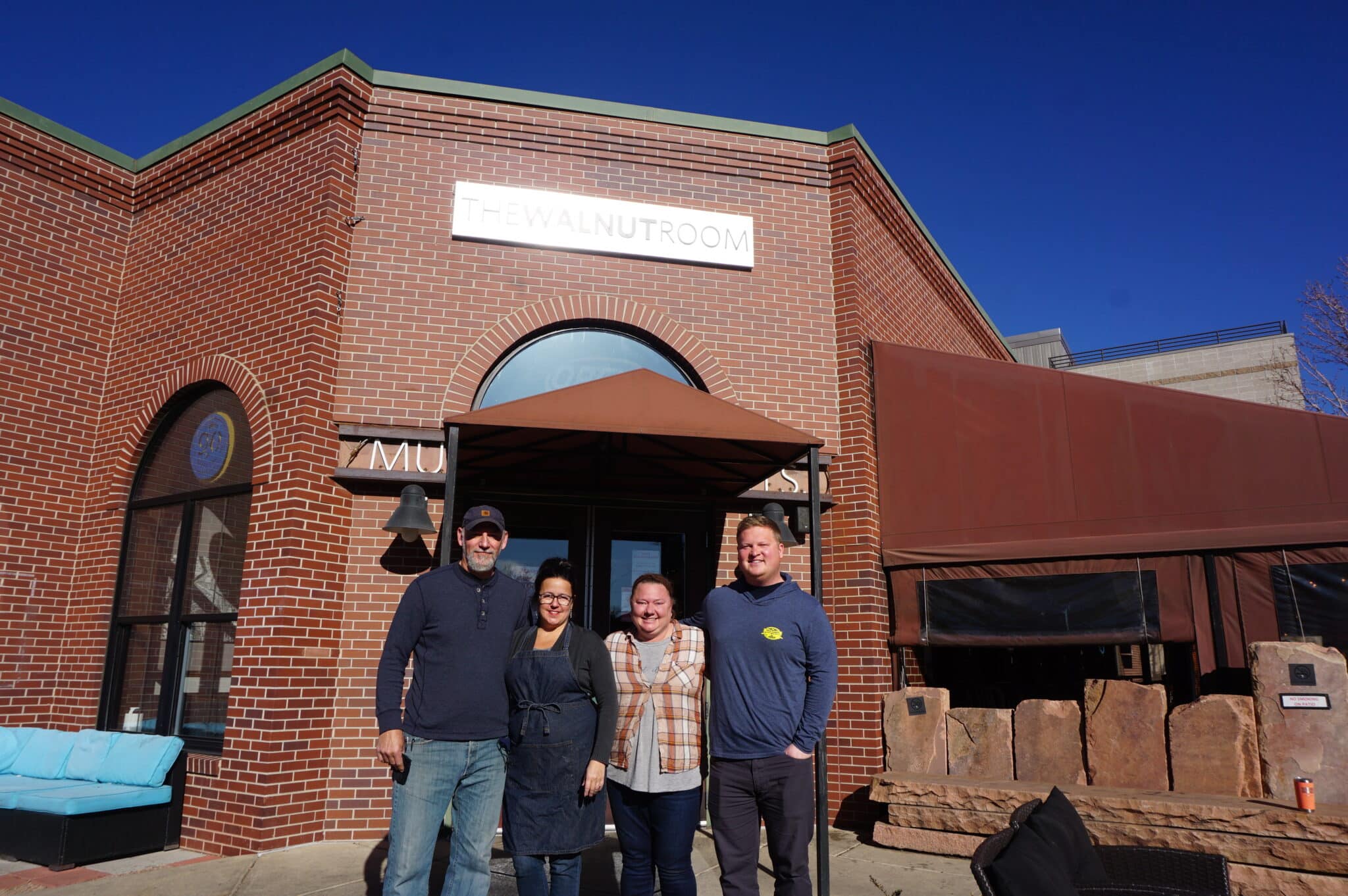 Lind had originally suggested opening a “bottle shop,” where people can drink beer while they shop for it, in the backroom, and Munson offered him the opportunity to lease the space to do so.

“But I’m a very big golfer, so I decided virtual golf would be a better idea,” Lind said. “Golf has always had a stigma as a harder sport to get into. The barrier for entry is money for clubs, expensive rounds of golf, and weather being perfect.”

He said the virtual golf scene is taking off.

“We know we’re not the only ones trying to open. Virtual golf is more approachable and brings it to another level. The bar community in Colorado is also very strong, and I think that type of activity lends itself to a lot of opportunities, which is why I think we’re seeing so many pop up.”

The Back Nine will have two TrackMan 4 golf simulators, which Lind said cost around $51,000 each, with 15 x 20-foot bays facing different directions. Customers can rent them out for $50 an hour or book the entire room for a private event.

The backroom will have a bar with golf-centric drinks, such as an Azalea, the unofficial cocktail of the Masters, and Bear Creek Distillery’s The Back Nine cocktail , which happened to be a coincidence, with iced tea, lemonade ice cubes and vodka.

There will also be beers to-go for sale in a cooler, harking back to Lind’s original idea for a “bottle shop.” The Walnut Room’s full menu, including pizza, sandwiches and wings, will be available.

“When Topgolf started, people wondered why people would pay $50 an hour to use a driving range and pay for premium-priced food and drinks,” Lind said. “But seeing it be successful has made these kinds of concepts much more approachable.” 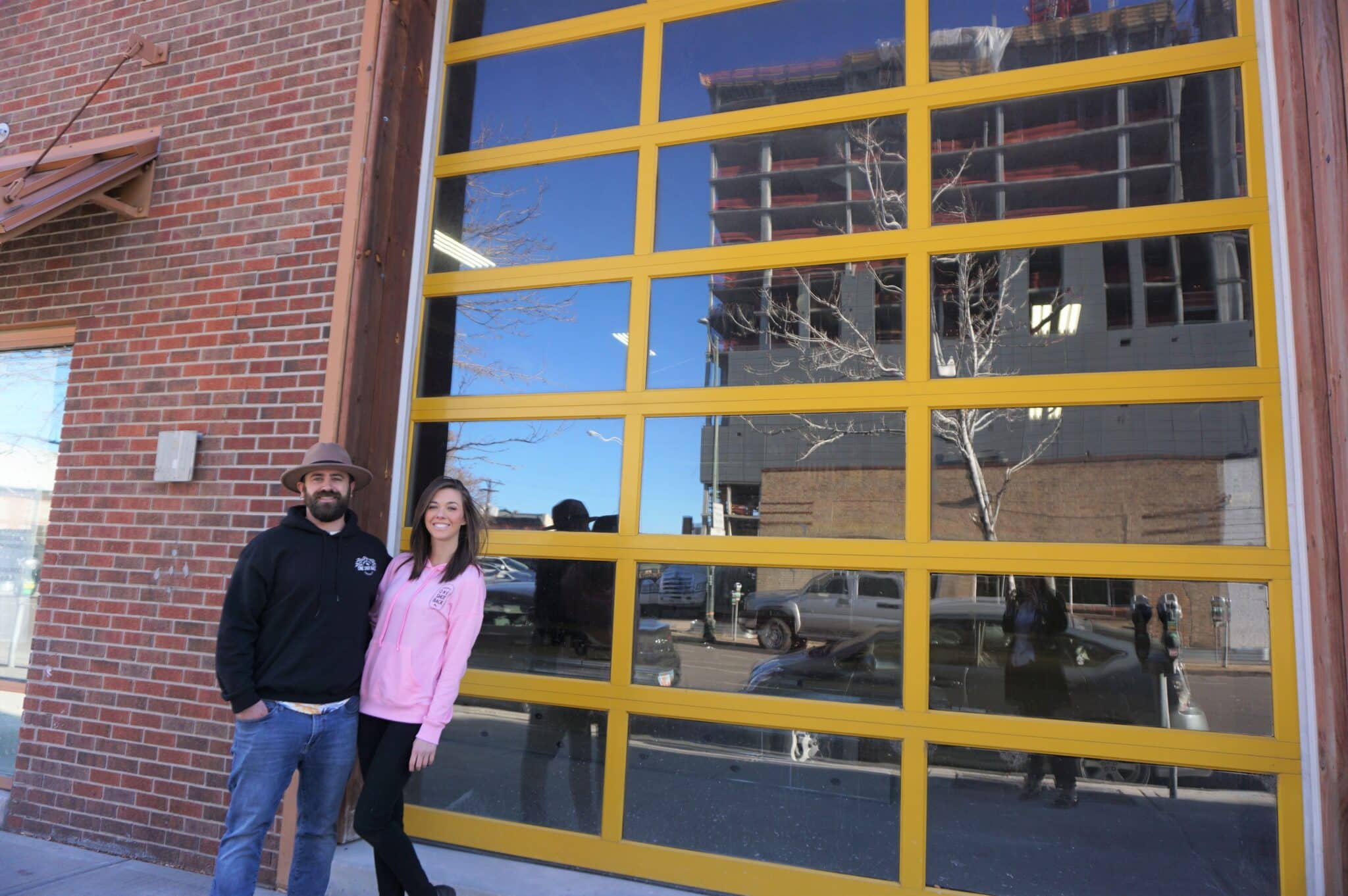 One Shot Back owners Jason Danielsen and Samantha Menendez met in 2018.

Less than a mile and a half away, Jason Danielsen and Samantha Menendez are planning to open One Shot Back at 2134 Curtis St.

The couple, who met in 2018, have worked in the service industry for 25 years collectively, including at Earls Kitchen + Bar downtown and the now-closed Oceanaire Seafood Room. But they were tired of getting stuck in a rut.

“It comes to a point where if you decide you’re going to stay in the restaurant industry, you have to start something yourself,” Danielsen said. “You get stuck in a holding pattern because there’s not much more movement besides staying with one company moving all the way up or becoming your own boss.”

One Shot Back, which they hope to open in March before the Masters, will be an upscale cocktail lounge with two TrackMan simulators in 15 x 20-foot bays. The simulators will be available for rent starting at $60 an hour.

Danielsen, now 33, has golfed since he was 7 years old, and Menendez had always wanted to move past the role of manager and own her own business.

“We were bummed out when Oceanaire closed down during the pandemic, and we thought what’s next?” Danielsen said. “We went and played at a golf simulator in town and loved the technology, but it was a boring atmosphere. It was dark, there was no one sitting at the bar and nothing pulling them in. So, we wanted to create something that pulls both non-golfers and golfers in.”

The couple signed a three-year lease for the 3,000-square-foot space in May. It was previously home to 720 CrossFit. They have silent investors helping them open, and they’ve hired Frontline Design and Development to design and construct the space.

One Shot Back will serve “unique” cocktails that are smoked, colorful and have edible flowers, Menendez said. There will be a large U-bar in the center of the space, lounge seating,  a shuffleboard or pool table, and an Instagram wall with green turf, a golf cart and a neon sign that says, “Gone Golfin’.” There will be no food, but they hope to partner with local food trucks and nearby restaurants. 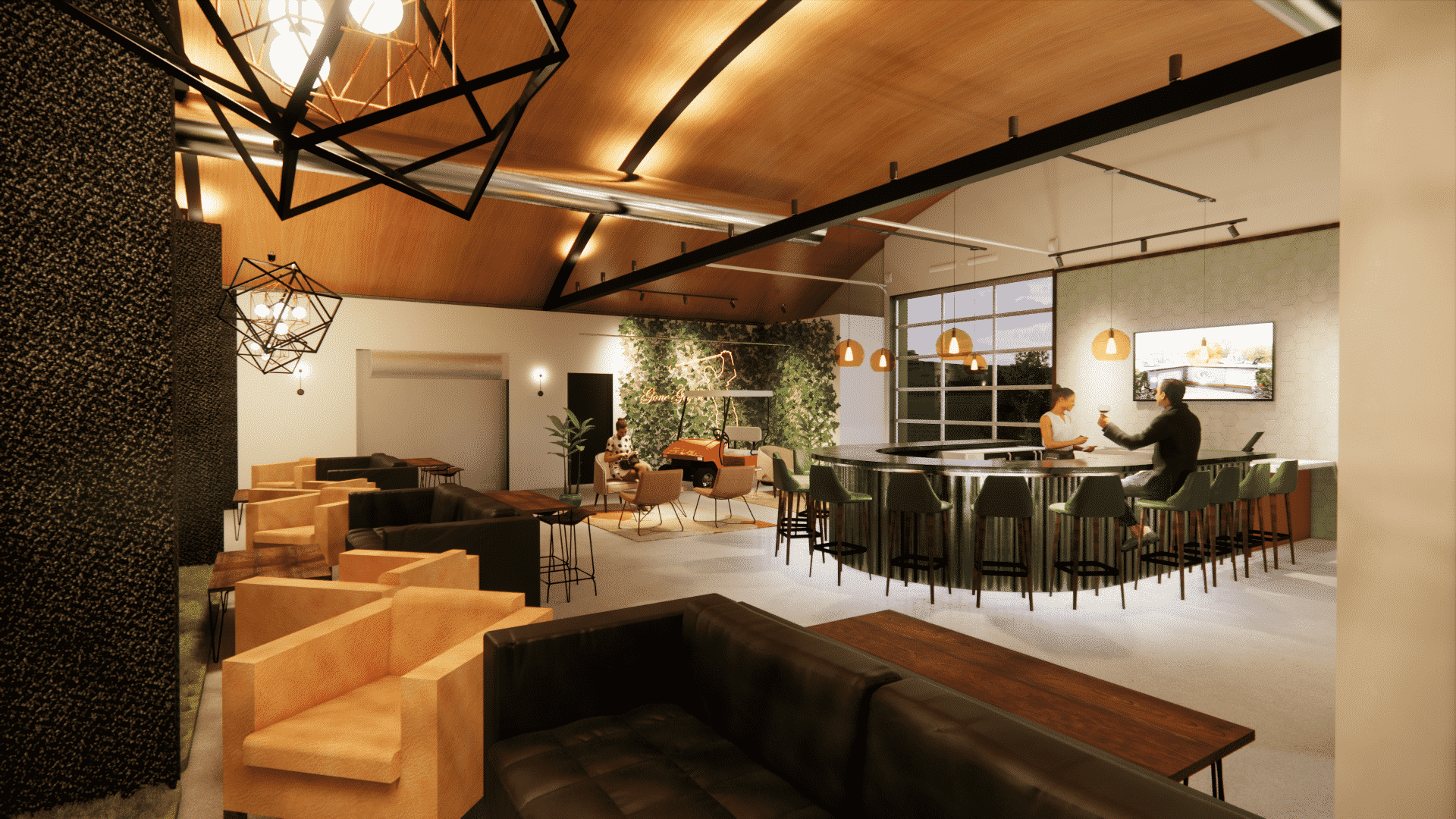 A rendering of One Shot Back, which the owners hope to open in March before the Masters. (Courtesy of Frontline Design & Development)

“The bar and golf simulators are almost two separate businesses,” Danielsen said. “The simulators already have such a following that they will bring in their own clientele. We want to bring in another clientele with the bar.”

The couple plans to host leagues, tournaments, corporate events and ladies’ nights at the new bar. Eventually, they want to add a third simulator to the space.

“We’re the most centralized golf simulator in downtown Denver,” Danielsen said. “We’re closest to the main strip of corporate businesses; we’re right next to the Ritz … and the biggest thing we’re situating ourselves for the future is the 5280 project on 21st Street, which will bring a lot of foot traffic here.”

Other businesses in town with golf simulators include:

• The Local Drive, opening in RiNo early next year

• South Broadway Country Club, which has a location on South Broadway, as well as Tennyson Street, and another upcoming one in Fort Collins

• Optimum Golf, which has locations in Park Hill and RiNo

South Broadway and Optimum are more geared toward those looking to improve their game than the casual user. Optimum doesn’t have a bar component, but all the others do.

For a different take on golf, a putt-putt bar dubbed RiNo Country Club is rolling into RiNo next year, as is the national chain Puttshack.

There will be two TrackMan simulators with 15 x 20-foot bays at The Back Nine in RiNo and at One Shot Back less than a mile and a half away. (Courtesy of Frontline Design & Development)

The Back Nine at The Walnut Room and One Shot Back will vie with about a half dozen similar venues that either opened or leased space in Denver last year.