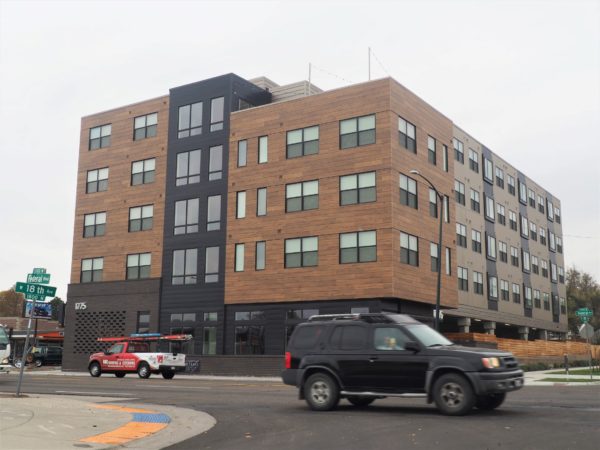 The building at 1775 Federal Blvd. in Denver sold for $15.6 million. (Thomas Gounley photo)

The five-story, 43-unit building is the result of modular construction, in which portions of a building are fabricated elsewhere, then hauled to the building site and lifted into place by crane.

John Zakhem, co-founder of the firm, said he doesn’t know how many modular buildings there are locally, but they’re rare.

The building was developed and sold by 1775 Federal Holdings LLC, which purchased the property in 2013 for $800,000, according to records. A former Pizza Hut restaurant at the site was demolished in 2018 to make way for the apartments. Justin Hunt, Andy Hellman and Katie Hufnagel of Newmark Knight Frank represented the seller.

The building is completed but has yet to receive its certificate of occupancy. Zakhem said the property is in an Opportunity Zone, and by purchasing the building before the certificate is issued Zakhem Real Estate is able to take advantage of the benefits associated with that federal program. Another nearby project sold in January before receiving its certificate for the same reason.

The purchase represents something of a shift for Zakhem Real Estate.

While the firm has always focused on small-to-mid-sized apartment buildings, its portfolio up to this point has consisted of buildings it developed. The company is currently constructing two projects, along Marion Street in RiNoand along light rail in Lakewood.

“We’ve never bought someone else’s work before,” Zakhem said, adding he’s not sure how much the firm will continue to pursue acquisitions.

Zakhem said Mile High Apartments is about 15 percent pre-leased. Rents will range from about $1,400 to $2,400 a month. The building’s unit sizes are a bit larger than average, he said, which should be a plus with the pandemic forcing most people to spend more time than normal at home.

Kitty-corner to the Zakhem’s new building, a former Burger King has been demolished. A five-story hotel is planned for that site.

The building at 1775 Federal Blvd. in Denver sold for $15.6 million. (Thomas Gounley photo)

The purchase of the five-story, 43-unit Mile High Apartments represents something of a shift for the buyer.