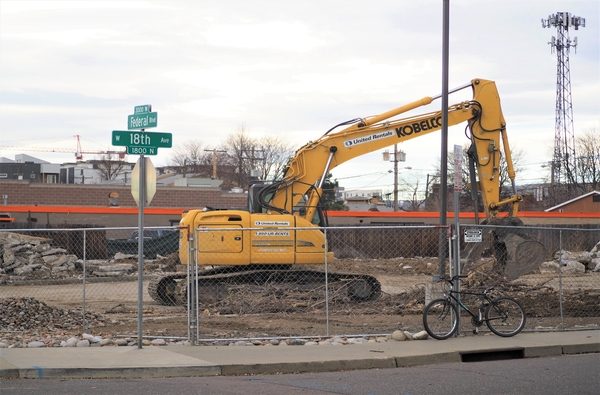 A Pizza Hut that was previously at the site has been demolished. (Thomas Gounley)

A former Pizza Hut along Federal Boulevard has been demolished, and things are about to move quickly.

Expect to see the core of a five-story building at 1775 N. Federal Blvd. by mid-February and construction crews departing by early summer.

“If all goes well, we’ll be wrapping up the job in June,” said Paul Gilbert, vice president of E. Gilbert & Sons Inc., the project’s general contractor.

Developer Rob Hahn plans to construct a 43-unit apartment building on the 0.42-acre site. The project will use modular construction, in which portions of a building, called modules, are fabricated elsewhere, then hauled to the building site and lifted into place by crane.

Gilbert, whose Michigan-based company has done modular projects across the country, said the Denver area has seen only a handful. 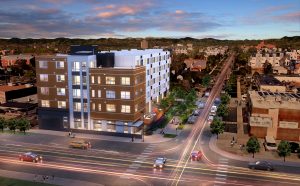 A rendering of the apartment building planned for 1775 N. Federal Blvd. in Denver. (Courtesy of Matt Chiodini with OZ Architecture)

The residential units at 1775 N. Federal Blvd. will sit atop a one-story podium, which will house 33 parking spaces, according to the plans.

Gilbert said he expects to break ground in the next week or two. It could take up to a month to construct the foundation, then another two weeks or so to build the podium, he said. By early February, Gilbert expects to be stacking the modules, which are being fabricated in Boise, Idaho, by Nashua Builders.

Interior work takes up much of the remaining months needed to complete the project, Gilbert said.

The property is owned by 1775 Federal Holdings LLC, which purchased the site in December 2013 for $800,000, according to records. Pizza Hut operated at the site until at least spring 2017, according to Yelp reviews. 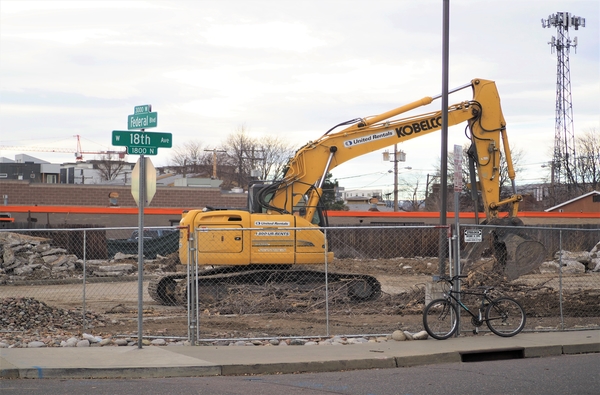 A Pizza Hut that was previously at the site has been demolished. (Thomas Gounley)

A former Pizza Hut at the site recently was demolished. ‘If all goes well, we’ll be wrapping up the job in June,’ the project’s generator contractor said.