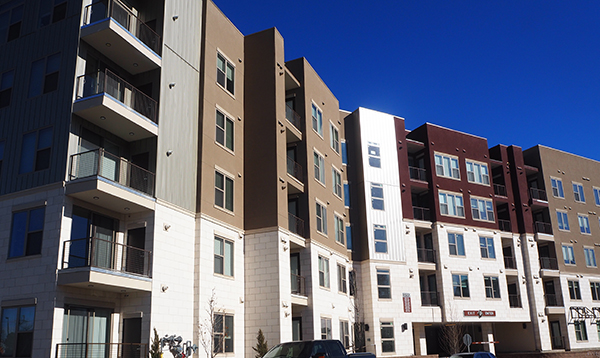 One more massive multifamily deal — this one a bit atypical — snuck in before the champagne and fireworks.

The purchasing entity lists an office address corresponding to an Industrious coworking location in Bellevue, Washington.

The complex right by the Federal Boulevard/Colfax Avenue interchange has 382 units, according to Embrey’s website, making the deal worth $379,581 a unit. It was sold by San Antonio-based Embrey, which purchased the 4-acre site in December 2016 for $8.13 million, records show.

Most multifamily sales take place after residents move in, when the developer can show prospective buyers strong leasing numbers. That wasn’t the case at Luxe, however. The complex lacks a certificate of occupancy. A representative who answered the complex’s phone number Thursday said the first residents are expected to move in come February.

Newmark Knight Frank brokers Terrance Hunt and Shane Ozment represented the seller. Hunt, who declined to comment on the buyer, said the seller hired the pair after being contacted by interested parties.

“The original plan was to stabilize it and sell it down the road, but this came together,” he said.

Rents at Luxe at Mile High range from $1,635 a month for a 585-square-foot one bedroom to $3,125 for a 1,385-square-foot two bedroom, according to the complex’s website, which advertises tenants can get up to two months free.

Hunt, who also represented the seller in the No. 2 and No. 3 sales, said he expects the hot market to continue into 2020.

“I think it should be a lot more of the same,” he said. “Tremendous interest.”

One more big 2019 multifamily deal — this one a bit atypical — snuck in before the champagne and fireworks.