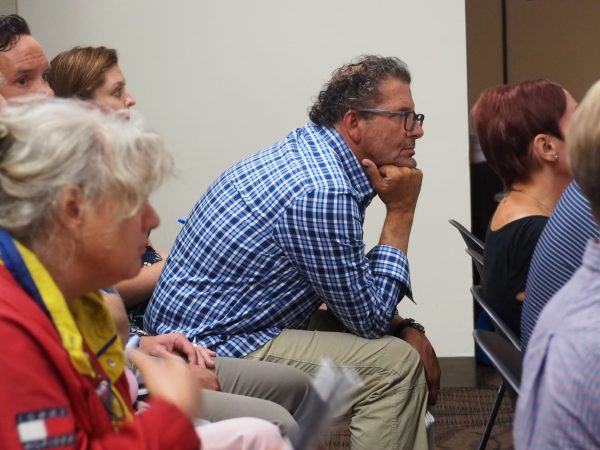 The owner of Tom’s Diner told reporters Tuesday that he felt “kicked in the gut” after a city commission recommended his property at 601 E. Colfax Ave. be designated a landmark.

Tom Messina, in his first public remarks since BusinessDen reported in May on a redevelopment proposal, told Denver’s Landmark Preservation Commission that he has long seen the sale of the property as his retirement plan.

“This property is basically all I have, and what I have based the future of me and my family on,” he said.

The commission’s Tuesday vote to recommend approval of the landmark application submitted by five Denver residents, however, was unanimous.

“We’ve seen owner-opposed applications before, but I don’t think we’ve ever seen one that so absolutely clearly meets the criteria and the bar for the historic significance in the city,” said Commissioner Kathleen Corbett.

The application now goes to City Council, which will make the final decision on the matter. Landmark designation would either scuttle the redevelopment plans or force them to be significantly scaled back.

Landmark applications submitted without the support of the property owner — sometimes referred to as “hostile applications” — are rare, although there have been some recently. The commission on Tuesday denied a separate hostile application for a home in Park Hill. And one recently was submitted for a shuttered funeral home in the Berkeley neighborhood. 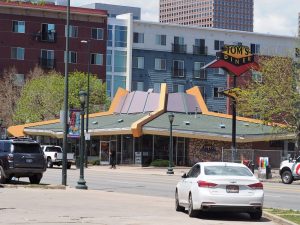 The diner now known as Tom’s was built in 1967, according to the listing for sale. It was initially part of Denver’s White Spot diner chain, and is an example of Googie architecture. According to a February Denver Post story, Messina began leasing the space in 1999. Records show he bought the half-acre property in March 2004 for $800,000.

Messina listed the property for sale in 2018. Earlier this year, Greenwood Village-based Alberta Development submitted an early-stage development proposal for the property, signaling the company was under contract to buy it. Alberta wants to demolish the structure and build an eight-story residential project.

Messina asked the city in May to designate the building as “non-historic,” which would make demolition easier. Following a standard review, city staff determined the property had the potential for historic designation. Denver residents Jessica Caouette, Sam Dorrance, Kristin Morales, Kaye Taavialma and Jonel Beach submitted the landmark application in June. 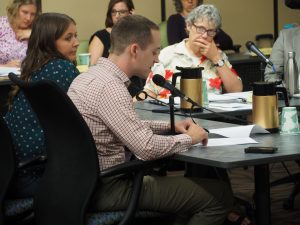 Sam Dorrance, one of five Denver residents who applied to make the Tom’s Diner building a historic landmark, speaks at the Tuesday meeting.

On Tuesday, Dorrance and Historic Denver Executive Director Annie Levinsky, who supports the landmark effort, said they hope to find a solution in which the diner building would be preserved while its parking lot is redeveloped.

Messina said he doesn’t see that as a financially viable option, and downplayed the rarity of Googie architecture, citing other buildings just down the street that he felt exemplified it.

While the applicants described themselves as big fans of Tom’s Diner, Messina expressed some frustration, saying, “I’ve been there 20 years, and I’m ready for a change. 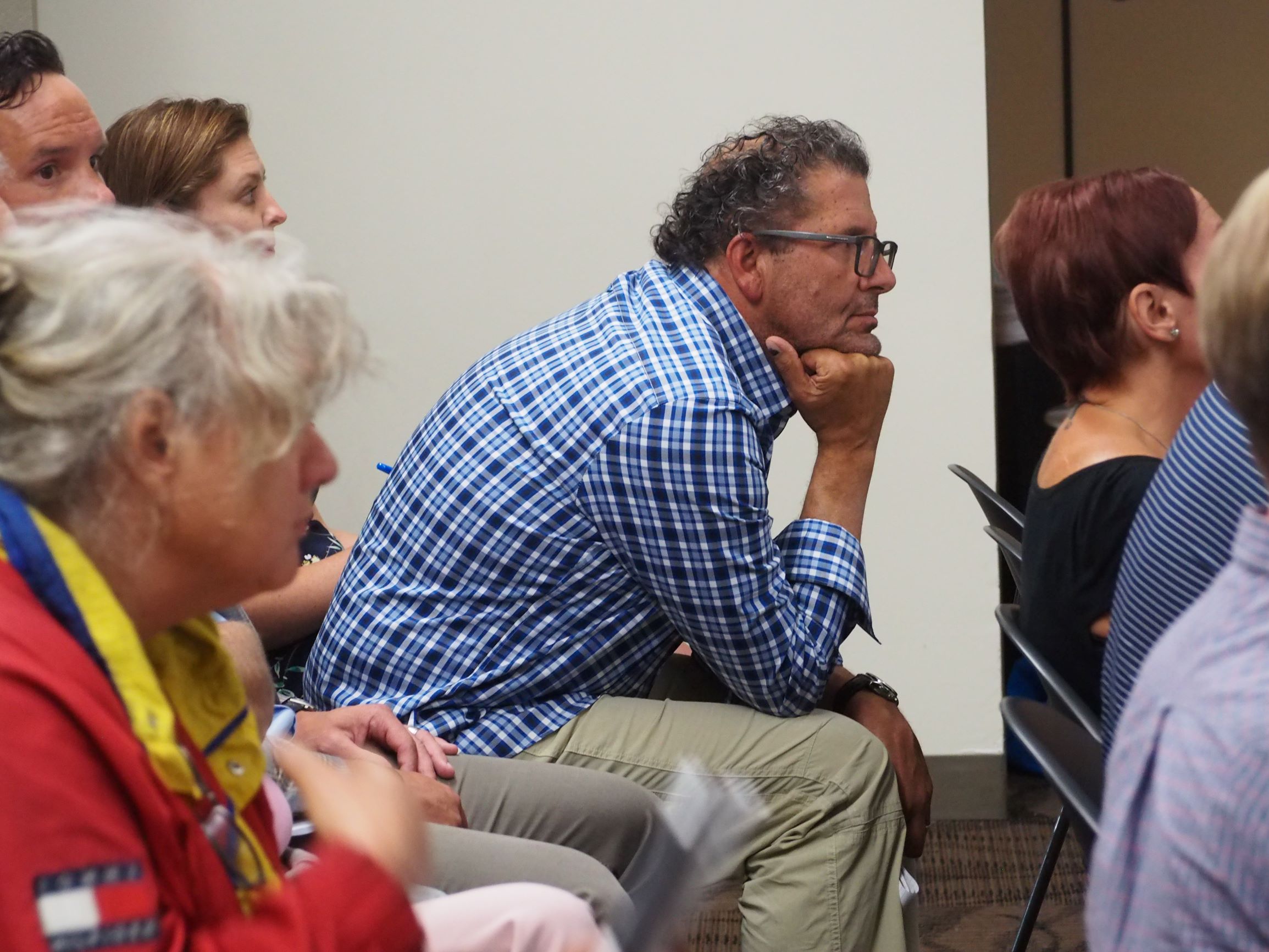 this is the ugliest form of NIMBYism that a community can see. Hostile landmark applications to prevent legitimate property owners from making decisions about their buildings and land. Tom’s Diner is trash food, meh atmosphere and not architecturally significant. It was a chain restaurant building for heaven’s sake. That would be like lumping historical status onto a defunct Pizza Hut because of the iconic roof. This is pathetic and the five NIMBYs should be ashamed. I hope that Tom can challenge this at the next level.

I support Tom here. Irregardless your position, I encourage you to:

How horrible for him. A few people who have done nothing to aid in that property get to destroy his future. How absolutely horrible!! Shame on them.

I presume the city of Denver and/or the applicants will financially compensate the owner due to its reduced value.

Maybe in the future people who do not own the building in question who want to designate historic structures should have to pay the ACTUAL OWNER of the property the amount they would have made.

I agree, if they want to preserve the building, they should raise/put up the money to have it moved.

This is clearly a taking. For all you government lovers out there, this is what they do. My guess is the beloved tax assessor is taxing this guy to the hilt for the glorious right to not use ones property. Sickening.

If this site is so architecturally important, the folks who submitted the Landmark Application and the Landmark Commission should buy the site from Mr. Messina at FULL VALUE and then they can do whatever they want to with it. This amounts to stealing the site and a complete disregard for property rights.

Get a grip people… Tom’s Diner wouldn’t still be around if it weren’t for the unique character of the building, Tom benefitted for many years off of its architecture by keeping his business going. As ColFacts so eloquently mentions, it wasn’t the food that kept this place in business for 30 years and made it an iconic diner on Colfax – ITS THE UNIQUE BUILDING. I’m am all for the importance of individual property rights – but they don’t trump the right’s of the community to preserve our history. 50 years ago the property owners on Larimer Square would have… Read more »

Paul A.
Reply to  Rick L

Dana Crawford assembled a group of investors to purchase Larimar Square in the early 1960’s to preserve it as the Denver Urban Renewal Authority sought to demolish the entire block as part of the Skyline project. There’s wasn’t anything “hostile” about the historic designation- it was sought by Crawford and her partners after they had purchased the buildings.

A similar thing could happen here, but no developers have come forward to save the diner in spite of Tom advertising initially for a buyer to come and do just that. Que the romantics

Rick L
Reply to  Paul A.

Fair point – I was misinformed about how that deal went down. That said the point I’m trying to make is that all this hand-wringing over the sanctity of property owners rights ignores the reality that many of the primary risks of property investment are regulatory – rezoning, eminent domain and yes potential historic designation. Those who choose to rely on property as an investment vehicle are accepting that fate, in the same way bond investors are at the whim of changes in the fed funds rate. The issue here isn’t whether Tom’s Diner specifically should be designated a landmark… Read more »

The overwhelming majority of people have most or all of their savings in real estate, in the form of their house. Should they have their life savings routed because someone deems their house historic? And by the way, the Commission can and has deemed private homes historic over owners’ objections. Rick seems to be fine with criticizing a man for not being wealthy enough to have a nicely diversified portfolio, but finds it intolerable to suggest that if the city wants to wreck a man’s life savings, they should pay him for it.

If you want to preserve the building as a historical landmark, buy the property and then donate it. Don’t sit back and demand the owner take a loss.

Oh, and by the way, in America, individual rights DO trump a community’s rights to preserve history. This isn’t a communist country that seizes private property for the good of the community.

If an individual makes the choice to hold most of their net worth in a piece of real estate, that’s a decision that entails a certain amount of risk just like any investment/asset. I have the same amount of sympathy for folks whose real estate assets decrease in value as I do for those who play in other asset markets – it sucks, but you (should) know the risks and rewards when you make that decision. I’m not criticizing Tom here – I sympathize with the fact that he pinned his retirement hopes of maximizing the value of this piece… Read more »

In the US individual property rights are governed by rules and regulations. Zoning and overlay districts are examples of regulations placed on real property assets, and have been around for decades in America. So you’re incorrect that individual property rights trump community needs in this country. It’s been that way for a long time. You also confuse state ownership of property (communism) with state regulated ownership of property, which is basically every other form of government currently in practice. Denver isn’t taking Tom’s property – it’s dictating what can be done with existing structures and redevelopment (which is its role… Read more »

Want to bet on that? Sniveling little weasels like yourself seem to think that government is all powerful as your worship at its altar. That only goes as far as I am willing to consent to recognize the rules. When tyranny like this exists, our duty is to resist. If I were Tom, I would have burned down or bulldozed the building if Denver had pushed on with this. Like it or not, there isn’t anything you can do to control people like me who simply won’t agree to play by your rules.

There is no landmark here. Nothing historically attractive that would draw people to the architecture. If this was awarded a site placard for the historical society then you would also want to get the same status for old gas stations , backyard incinerators, clothesline’s, and out houses. Please do not make a mockery of the historical building identification. This looks like a cheap building method of its time for any eatery.

It seems you are not taking into account that the zoning here has not changed. This space is zoned to allow for what the purchaser of the property wants to do. The city can do whatever it wants to to preserve the “character” of the community (though I fail to see how this hideous building does that), but it should be obligated to pay for that preservation. It’s not one individual’s burden to preserve the history of the community.

Agreed. This building is ugly. Also, I highly doubt council will likely not vote to preserve it. This particular council is extremely interested in creating housing that does not result in minorities/lower income families being displaced.