A developer that has gone under contract to buy a prime downtown parking lot is floating construction of a 40-story mural-inspired tower, while also noting it’s making plenty of money in its current use.

The lot is owned by Paradise Land Company, led by Buzz Geller, which bought it for $3.18 million in 1998, according to public records. It’s at the edge of the Central Business District and Arapahoe Square, across from the Greyhound bus station, a full city block that is currently for sale. (While no list price has been disclosed by brokerage JLL for the Greyhound site, Eisenstein said it is $45 million.)

While Eisenstein has not submitted any development plans for 1901 Arapahoe to the city, he has renderings and a snazzy website showing off his proposed “Love This City Tower,” which would incorporate a four-or-five story base with retail and parking. That would be topped with retail and outdoor deck space and a narrow pedestal, on which would rise the tower.

The tower’s pedestal would feature a mural, which would be reflected by mirrors on the tower’s base.

“It is dreamlike, and it is putting aesthetics first,” Eisenstein said. 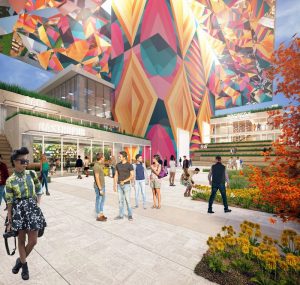 A rendering of the retail and deck space mid-way up the structure, beneath the residential units.

The tower’s name, and the mural, would be inspired by Pat Milberry’s “Love This City” mural on the building at 2314 N. Broadway. Eisenstein said he manages licensing of the image for the artist.

“Why not take that and almost infuse it as a lifestyle brand in a tower?” he said.

Eisenstein’s proposal was first reported by the Denver Business Journal.

A Land Capital budget document envisions the tower having 1,253 residential units, averaging 510 square feet. Eisenstein said he’d expect those units to be apartments, but that the building could incorporate a hotel as well.

Eisenstein said he still needs to nail down investors or capital partners that would finance the construction of the tower. But he said he has investors in place for the purchase of the land, and that one option is to just keep it as parking lot after closing.

He said the parking lot is doing nearly a million dollars in net revenue annually and has become more popular as nearby lots are redeveloped.

Architecture firm Formulative drew up the tower renderings, but Eisenstein said he’s looking to get another larger firm involved as well.

Land Capital has posted financial forecasts for the site assuming both scenarios: building the tower and keeping it a parking lot. The tower document shows the project having 1,253 residential units, averaging 510 square feet. Eisenstein said he’d expect those units to be apartments, but that the building could incorporate a hotel as well.

Prior to Eisenstein, the most recent development proposal that became public for 1901 Arapahoe came in 2017, a two-tower, 40-story condo project floated by Miami developer Lorenzo Rendi. By the end of that year, however, Renzi had dropped out of the project.

Paradise’s Buzz Geller said in an email that Eisenstein “really believes in the site.”

“His one structure concept as opposed to the two structures previously proposed makes more sense,” Geller said. “Based on the parking revenue alone, I’m sure he will close.”

The Love This City Tower stands out from Land Capital’s other projects. Eisenstein and development partners are buying land around the Westminster commuter rail station, and recently sold a site in Louisville entitled for a townhome development for $5 million. The company’s website also shows a rendering for a condo project across from Uptown’s Avenue Grill; that parking lot was rezoned earlier this year, but Eisenstein said environmental remediation work needs to be completed before development could occur.

Eisenstein also purchased two apartment buildings in Denver’s Congress Park for a combined $11 million at the end of 2017.

Two other downtown parking lots owned by Paradise are currently under contract, according to the firm’s website. The first is along Speer near Larimer Square, where a Texas-based firm wants to build a 36-story tower. The second is 650 17th St., where in 2018 a New York developer proposed a tower that would have exceeded the tallest currently in the city. The party currently under contract for that site has not been made public, although Paradise’s Buzz Geller has said it is not the New York developer.

But Michael Eisenstein says he could also just opt to keep 1901 Arapahoe St. as a parking lot.