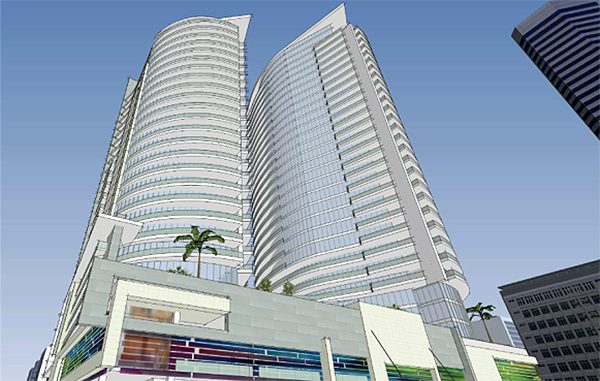 A rendering of the proposed condo towers and ground-floor retail.

The real estate developer behind a proposed 40-story condominium tower in the heart of downtown Denver has dropped out of the project.

Miami developer Lorenzo Renzi this spring unveiled plans for Paradise Living, which would transform a a surface parking lot at 19th and Arapahoe streets into a mixed-use development with 30,000 square feet of retail space and 800 condominiums.

But Renzi is no longer a part of the proposal, said Kevin Geraghty, who identifies himself as a spokesman for a group of investors backing Paradise Living.

“Lorenzo has decided to move onto a different project,” Geraghty said.

Renzi has roots in the Miami residential market, according to local media. But he lost an office tower and his home to foreclosure judgments, and in 2011 filed Chapter 7 bankruptcy.

Reached by email, Renzi did not reply to questions about a Denver project.

Last week, a trailer at the site was removed from the property. Geraghty said the investor group had been trying to market the condos for sale in house, but instead is hiring an outside firm. He said a marketing company has not yet been chosen.

“We have decided the trailer was not the right vehicle with which to sell our luxury condos,” Geraghty said. “We have regrouped and are moving forward with our new marketing partner.”

Geraghty said the exit of Renzi and the change in marketing tactics does not change plans to build Paradise Living.

He said the group is undergoing entitlements and has pre-construction drawings from MOA Architecture. Paradise Living will field bids from potential general contractors within 30 to 90 days.

“Our investment group has stepped up to the plate and everything is moving forward,” Geraghty said.

A rendering of the proposed condo towers and ground-floor retail.

The real estate developer behind a planned 40-story condominium tower in the heart of Denver has dropped out of the project.