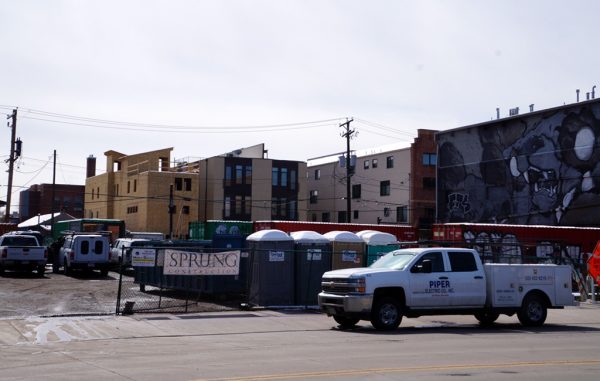 A developer wants to build a food hall topped with offices on an undeveloped lot at the edge of RiNo.

The 19,500-square-foot food hall would be on the ground floor and have a mezzanine level. The plans show 21 vendor spaces ranging from 163 to 1,565 square feet.

The building also would have a rooftop patio for tenants and food hall patrons, and two levels of underground parking, according to the plans, which have yet to be approved by the city.

A Focus executive did not respond to a request for comment.

The company paid $2 million for the 0.43-acre lot in July 2015, according to property records. The lot is currently being used to stage materials for the Ramble Hotel, which is under construction next door.

Focus’ other developments include office building Enterprise at 3002 Lawrence St. and a 12-story Hilton Garden Inn under construction at 1963 Chestnut St. in LoDo.

The proposed food hall would be just down the street from another one, Denver Central Market at 2669 Larimer St. Other Denver food halls include Avanti in LoHi and the recently opened Zeppelin Station in RiNo. Another is slated to open on North Broadway in the Golden Triangle later this year.

A developer wants to fill an undeveloped Larimer Street lot with nearly two-dozen vendors and 42,000 square feet of office space.

As an artist, gallery, property owner, and long-time resident in Denver’s “edgy” RiNo Art District, my perspective might be a bit jaded, I am wondering when there is going to be some genuine “out of the box” thinking when it comes to developers conceptualizing their proposed projects?

While I know that there needs to be an ROI per square foot of space, can there be ideas/creative thinking other than food courts? Or for that matter, co-working spaces. Seems like every new development is jumping on this bandwagon with new food halls/courts boasting exciting cuisines and different culinary experiences and/or shared work space, yes complete with ping-pong, corn-hole, whatever……….

I love good food and also that exciting experience of discovering the coolest and cutting edge food venue, but how many of these places can exist before the marketplace is so overloaded? Or is there just an unsatiable “appetite” for this?
How about addressing the housing issues in Denver? Or lack of housing…

RiNo is first are foremost an arts district. That’s right, an arts district. Arts related spaces, galleries, studios, performance and exhibition spaces, live work spaces for artists and creatives…….The arts may not provide a quick or maximum ROI but they enhance and enrich our cultural fabric multifold.

Please remember that RiNo is and has been, and will be an arts district.