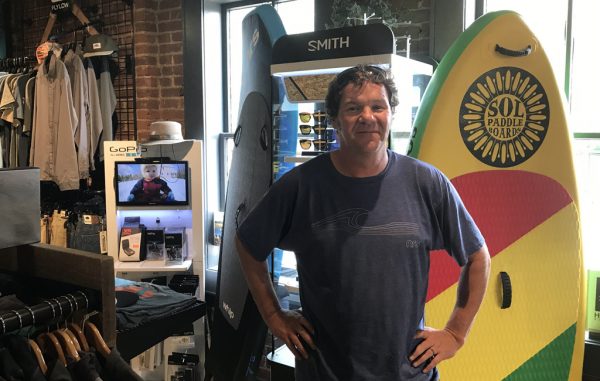 Another business has paddled away from Platte Street.

Confluence Kayaks, a staple of Platte Street for more than two decades, has swum upstream to a three-story, 6,500-square-foot building at 2301 Seventh St. near the aquarium.

“We really wanted to stay in the neighborhood because we’ve been here for all 22 years of our existence,” said owner Jon Kahn. “We were looking all over town. We looked in RiNo off Brighton Boulevard. We looked as far south as Hampden and Sante Fe. And this place became available before we signed a lease anywhere else.”

Like fellow Platte Street business Natural Grocers, Confluence Kayaks is leaving LoHi to make way for Platte15, the five-story, the $60 million office and retail property project on their old corner set to break ground next month.

Confluence’s new location is directly across Water Street from the Downtown Aquarium and used to be occupied by El Senor Sol and Tapas De Espana before Confluence moved in on June 25. Built in 1892, the building also used to house Zang Brewing Co.

Kahn said the shop is planning a grand opening for early August.

A staple of the original location was an indoor pool where customers could try out kayaks for themselves. The new shop is 3,500 square feet smaller, so Confluence is trading its old kayaking pool for a different kind of liquid attraction: a bar with beers on tap and a patio. Kahn expects to acquire Confluence’s liquor license in September.

“(The pool) didn’t really pay for itself,” Kahn said. “It was a really cool attraction and it brought a lot of customers in, but it cost a lot to heat and it was sitting on 1,500 square feet. We just didn’t have room for it here.”

Confluence is paying about $10,000 per month in rent at its new location, Kahn said. That’s $6,000 less than what he was paying on the eastern corner of 15th and Platte.

Confluence rents and sells kayaks, standup paddleboards, skis and bikes, including Colorado brands such as Hala Gear and Sol Paddleboards.

“We try to really support local brands and especially smaller brands that aren’t represented at REI or any of the other big box stores.” Kahn said.

Kahn, a former kayak instructor and rafting guide, started the shop in the mid-1990s just as Confluence Park was rebuilding its whitewater chutes.

Recently, Confluence Kayaks has gone into the bike tour business. A year ago, Confluence bought Bikalope Tours, which guides guests on a two-hour bicycle rides around central Denver.

Another big business change is a surge in paddleboard popularity, challenging the shop’s namesake kayaks.

“This year, we’ll probably sell just as many paddleboards as kayaks, or even maybe potentially more paddleboards,” Kahn said. “That’s really grown and been a big part of helping us grow.”

As a massive mixed-use development prepares to break ground near its storefront, a staple of Platte Street has swum upstream to a three-story, 6,500-square-foot building at 2301 Seventh St. near the aquarium.