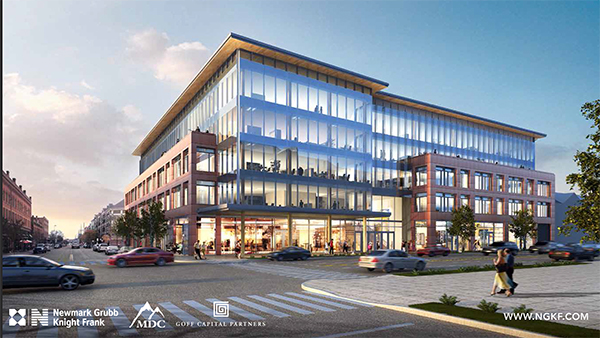 Platte Street’s construction streak will roll on into at least 2018.

Goff Capital Partners will break ground next year on a new $60 million, five-story office and retail building at 15th and Platte streets, called Platte Fifteen, with plans to debut the development near the end of 2018.

That makes at least five Platte Street projects either recently completed or in the pipeline.

“We think it’s a phenomenal location that’s now in transition with the Nichols building, the Lab on Platte and the projects Unico and Trammell Crow are planning in the future,” said Steve Eaton, Goff vice president. “We love the sort of intersection of LoHi with the Central Platte Valley and the huge amenity of the Platte River flowing right through there.”

Plans call for about 133,000 square feet of office space and 14,000 feet of retail storefront wrapping the eastern corner of 15th and Platte. Goff bought the one-acre site for $8.15 million in August 2014. 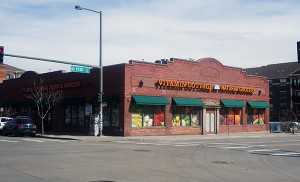 The site currently has a Natural Grocers and Confluence Kayak and a parking lot. Photo by Burl Rolett.

The property currently houses a Natural Grocers and Confluence Kayaks. Eaton did not say when they had to move out, but construction will start in the middle of 2017

Platte Fifteen will have four stories of office space at about 34,000 square feet per floor. The first floor will house the property’s retail space and there will be two levels of underground parking.

Eaton said office lease rates will be in the low- to mid-$30 range. Newmark Grubb Knight Frank brokers Scott Garel and David Hart are in charge of leasing. Eaton expects it will take four to six tenants to fill the building.

“We don’t think we will have to build on spec, because we’ve had significant leasing interest,” Eaton said. “We’ve had interest from a couple full-building users, but based on the market and some of the groups we’re talking with, if a tenant doesn’t have the full building, it might be two floors or a full floor.”

Platte Street might be the hottest three-block stretch of Denver for real estate development. The Nichols Building and the Lab on Platte both came up last year. Unico is planning an 82,000-square-foot office building at 16th and Platte and Trammell Crow Co. is working on a redevelopment at the former Empire Staple Co. building.

“If you look at the last two buildings that have been delivered, they’re smaller-scale projects,” Eaton said. “A lot of the projects aren’t of significant size, and we’ve seen other developments on the street have been successful getting leases done.”

Platte Fifteen will be Goff’s first development in Denver, but the company isn’t stopping at just one project. Goff also owns the Riverfront building at 2300 15th St. and about 1.14 acres of land around it. The firm paid $21.375 million for that site last year.

Eventually, Goff plans to carry Platte Street’s development boom over to the other side of 15th Street.

“Riverpoint is still fairly new, so we’re still refining our plans for ultimately what we might do on that site,” Eaton said. “We’re thinking about adding more office space, but that may change.”

Goff Capital Partners will break ground next year on a new $60 million, five-story office and retail building at 15th and Platte streets, That spot currently houses a Natural Grocers.