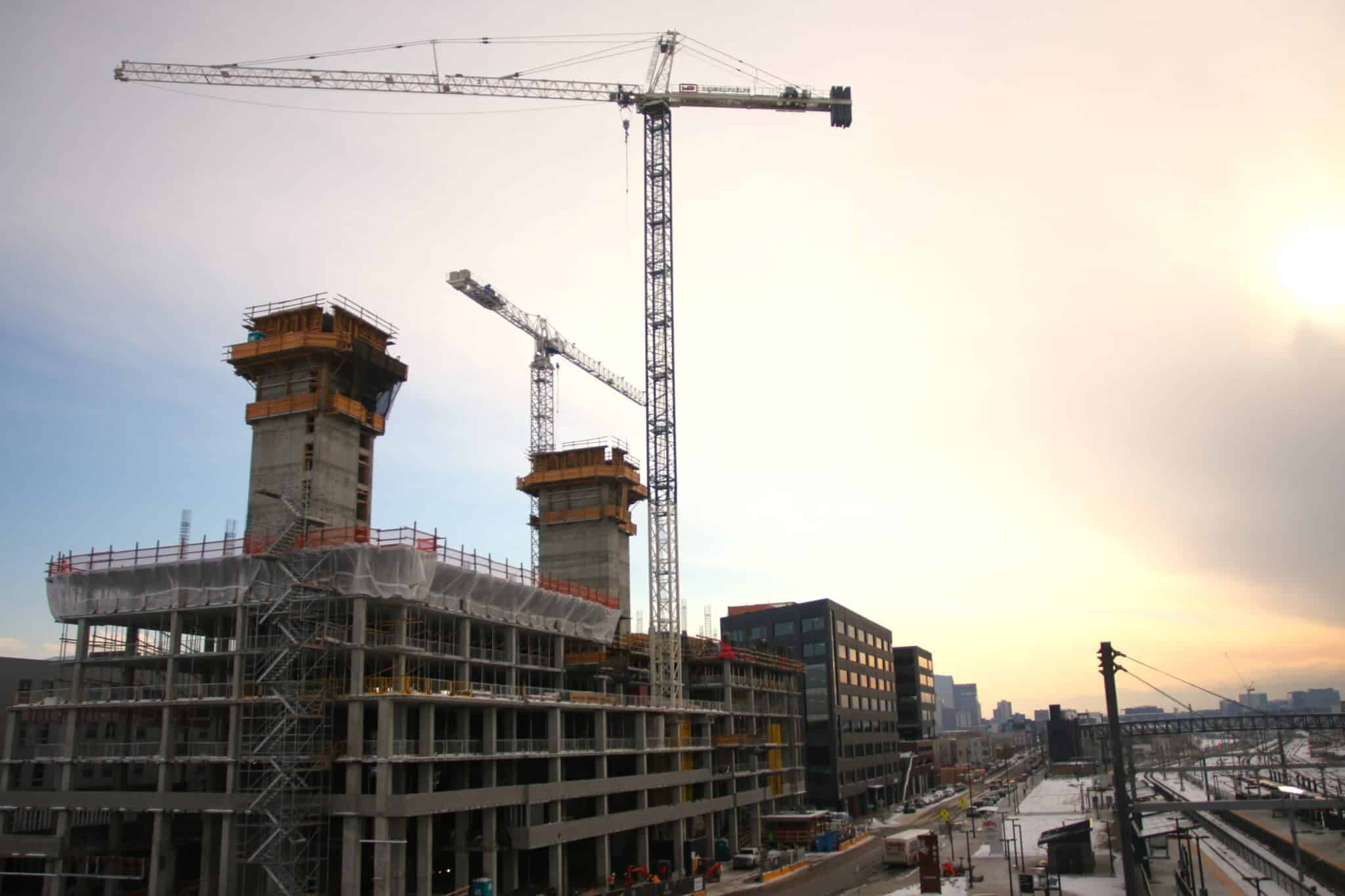 Construction continued Feb. 25 on the 348-unit FoundryLine apartment building at 3750 Blake St. in RiNo, which will make some units income-restricted. (Eric Heinz photo)

As Denver considers requiring residential developers to either incorporate income-restricted units or pay a massive fee, the city is hoping some will go above and beyond the mandated unit count.

And to try and make that happen, it’s looking to replicate an incentive program that’s been in place for several years around a RiNo rail station.

Right now, the city’s 38th and Blake zoning overlay allows developers to build higher than their zoning would allow — say 12 stories instead of eight — if they incorporate income-restricted housing.

Although some question the success of that effort, the city’s proposed Expanding Housing Affordability requirements, which look to take advantage of a state law passed last year, would expand the incentive across much of the city.

And back at 38th and Blake, the city wants to increase the base zoning even further, potentially providing even more height to one of the city’s main redevelopment hotspots.

He said the move would create a more consistent citywide approach.

But not everyone is on board with the plan.

But the requirements are going to make it a lot harder to build, he said.

“With what the city is proposing, the linkage fee and affordable housing requirements, we were just barely able to make our project financeable, and you end up giving up quality,” Hurley said. “We have a wonderful relationship with the city, and I know these are difficult issues.”

Since the 38th and Blake overlay was approved in late 2017, a handful of residential projects nearby have taken advantage of the incentive, including ones under construction by McWhinney and Crescent Communities.

“To me, this deal proves that the 38th and Blake zoning overlay is working as intended,” Andrew Feinstein, CEO of EXDO Group Cos. — which sold the land to Crescent — told BusinessDen last year. 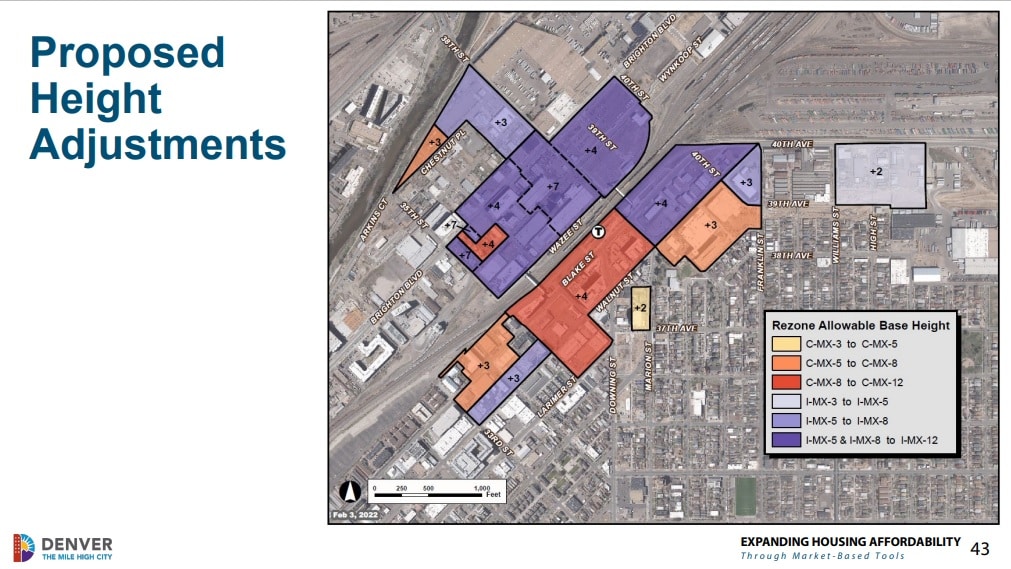 This map shows the proposed increase to building base height limits in the 38th and Blake overlay district as part of planned incentives to developers to build more income-restricted housing. (City of Denver)

But other projects in the area haven’t tried to take advantage of the height incentive, meaning they didn’t have to incorporate income-restricted units.

Councilwoman Candi CdeBaca, who represents RiNo, was critical of the incentives plan during a committee meeting last Tuesday, portraying it as a bust.

“The reason 38th and Blake did not get any (affordable housing) was because we set that base height too high,” said CdeBaca, adding her office wasn’t consulted on the latest proposed changes. “I’m curious as to why we’re going higher than before knowing that overlay completely failed.”

Johnson said in response that the 38th and Blake incentives had not been tremendously successful in producing affordable housing because there is no affordable housing requirement at this time. He said the new proposal should work better.

“We feel that even with the (larger building heights), the outcomes will be significantly better than what we’ve seen,” Johnson said.

As part of the plan, the height incentive would be rolled out to many, but not all, properties in the city. Developers would not be able to build higher than 75 feet with incentives if their project is within 175 feet of a protected zone, according to Community Planning and Development staff.

In certain areas downtown, multifamily residential developments that exceed the minimum income-restricted housing units could apply to increase their overall mass, calculated in floor area ratios, as opposed to their height.

Non-residential projects, like office buildings, would also be able to take advantage of the height incentive in some areas within a half-mile of transit stations and certain areas zoned downtown. To do so, they would pay double the linkage fee, which the city sets aside for income-restricted housing projects. That fee is already slated to increase as part of the overall plan.

The height incentive is the most prominent of several the city wants to offer to try and get developers to exceed the proposed requirements. It is also proposing to reduce parking requirements for above-and-beyond projects.

Back in RiNo, the proposal would increase the maximum base heights around the 38th and Blake station and continue to allow developers with projects that qualify to build up to 16 stories in some places.

Hurley, who owns about six acres along the South Platte River, said he had to reevaluate the first phase of his project — which now calls for two 12-story buildings, one office and one apartments — because of the rising costs of building materials.

That first phase won’t need to conform to the city’s proposed requirements because it’s already near breaking ground. But the remaining phases of the project may, if the council passes it later this year.

“When you’re boxed into time frames and relying on the city to deliver, then you’re at the city’s mercy, and it’ll make things a lot more difficult,” Hurley said.

Hurley said the changes in the plan specific to the area around the 38th and Blake station aren’t necessarily a game changer for developers.

“My zoning, in some areas, has a five-story base, but the five-story base zoning will get raised to eight. But you still have to buy your way up to the 12 (stories),” Hurley said. “We’ve always had the ability to go up to 12. It’s that you have to pay to go up.”

The city will hold virtual meetings with city staff regarding the 38th and Blake proposals specifically on March 10.

Construction continued Feb. 25 on the 348-unit FoundryLine apartment building at 3750 Blake St. in RiNo, which will make some units income-restricted. (Eric Heinz photo)

A city planner said the 38th and Blake zoning overlay has not been tremendously successful but he expects the outcomes to be significantly better this time.