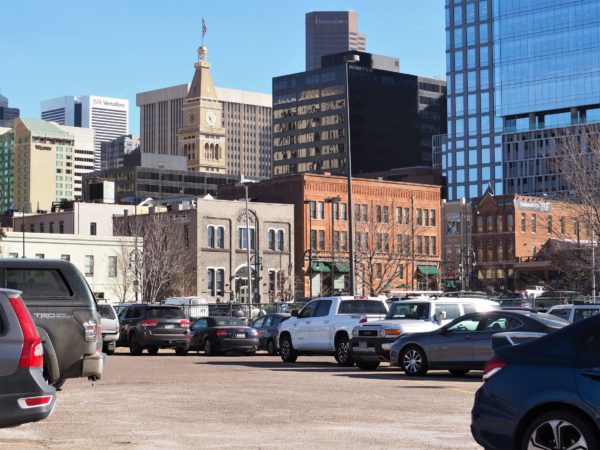 The view of downtown from the site of the proposed 36-story tower. (Thomas Gounley)

Kairoi Residential no longer is under contract to buy the site in LoDo where it proposed a 36-story apartment tower.

The San Antonio-based developer’s contract to purchase the southeast corner of Market Street and Speer Boulevard expired at 5 p.m. on June 22, according to Buzz Geller of Paradise Land Co., which owns the site.

Geller said the contract between his firm and Kairoi gave the development firm five options to extend the contract for 30 days each, for a price outlined in the contract.

Kairoi elected not to use those options, said Geller, adding he is in discussions with a different developer interested in the site.

Kairoi executives did not respond to multiple requests for comment.

The site is at the edge of Larimer Square. Geller owns the entire block bounded by Market and Larimer streets, as well as Speer Boulevard and 14th Street. The block is divided in half by the Cherry Creek bike path.

The site is referred to as Bell Park because it’s home to the bell from Denver’s first city hall, which occupied the site until it was demolished in 1936. 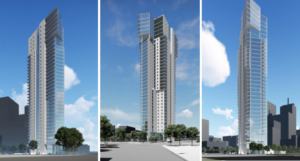 BusinessDen broke the news in early 2019 that Kairoi had submitted development plans to the city for the site. The company proposed a 36-story apartment tower on the western portion of the site, along Speer Boulevard. The plans called for a five-story office building with a ground-floor restaurant and retail space on the eastern portion of the site.

The structures would not have been connected. Geller said in January 2019 that his deal with Kairoi called for the company to own the apartment tower, and for him to own the office building.

On Monday, Geller told BusinessDen that Kairoi essentially had been working on the project for two-and-a-half years, if you count the time the company had a letter of intent for the property before it formally went under contract.

Kairoi (pronounced KY-roy) is the rebranded result of the late 2017 merger of Lynd Residential Properties and Lynd Development Partners. The firm recently completed its Park 17 apartment complex in City Park West. The company also submitted plans last year for a project that would replace a hotel along Colfax.

Geller, meanwhile, in May sold a corner lot along Santa Fe Drive in Lincoln Park to Leon Cisneros’ CRE Development Investments. He still has one property under contract to be sold; Chicago-based Riverside Investment & Developments has proposed a 30-story office tower at 1901 Arapahoe St.

The view of downtown from the site of the proposed 36-story tower. (Thomas Gounley)

The property owner said San Antonio-based Kairoi Residential elected not to use options allowing it to extend the contract.