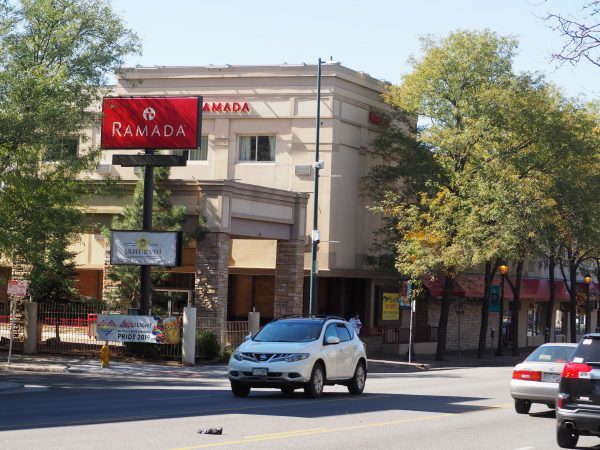 A Texas-based development firm says it is under contract to buy the Ramada hotel at 1150 E. Colfax Ave. in Denver. (Thomas Gounley)

Long-term leases could replace nightly stays at a spot along East Colfax Avenue.

Tyler Sibley, an executive with Texas-based Kairoi Residential, told BusinessDen last week that the company is under contract to purchase the Ramada by Wyndham Denver Downtown property at 1150 E. Colfax Ave., and hopes to close sometime next spring or summer.

The company would tear down the hotel. Kairoi wants to build a seven-story apartment building on the 1.97-acre site, with wood-frame construction on top of a concrete podium.

The approximately 336-unit project would feature about 6,000 square feet of retail space on the ground floor and parking on the first two levels, Sibley said.

The company has submitted an early-stage conceptual plan to the city for the project, but has yet to submit a fuller site-development plan.

The hotel building is owned by Keys of Denver Hospitality LLC, which lists an office address in Utah. The company purchased the property in October 2012 for at least $8.3 million, records show. Hotel sales sometimes involve a personal property component that isn’t reflected in public records.

Kairoi (pronounced KY-roy) is the rebranded result of the late-2017 merger of Lynd Residential Properties and Lynd Development Partners. Sibley noted the firm is wrapping up work on Park 17, an apartment complex a short distance away at 1280 E. 17th Ave.

Sibley said the company sees the hotel site as the “nexus” between Capitol Hill, Uptown and Cheesman Park, and noted the large size of the parcel. Construction likely would take 24 to 30 months, he said.

“We’re excited to be a part of everything that turns over, so to speak, on the Colfax corridor,” he said.

Kairoi is also still in the planning stages for a much larger project along Speer Boulevard near Larimer Square. It submitted a project concept late last year for a 36-story tower on land currently owned by Buzz Geller’s Paradise Land Co.

Editor’s Note: A reference to when the hotel was built, citing property records that appear to be inaccurate, has been removed.

A Texas-based development firm says it is under contract to buy the Ramada hotel at 1150 E. Colfax Ave. in Denver. (Thomas Gounley)

The hotel sits on a 2-acre lot.

The Ramada inn building dates back further than the 80s, it was originally called the ”Heart of Denver Motor Hotel. http://www.colfaxavenue.org/2015/02/heart-o-denver.html?m=1

Thanks for this info, Sebastian. I got that info from the website of the city assessor’s office, but unfortunately it does have inaccurate info occasionally.