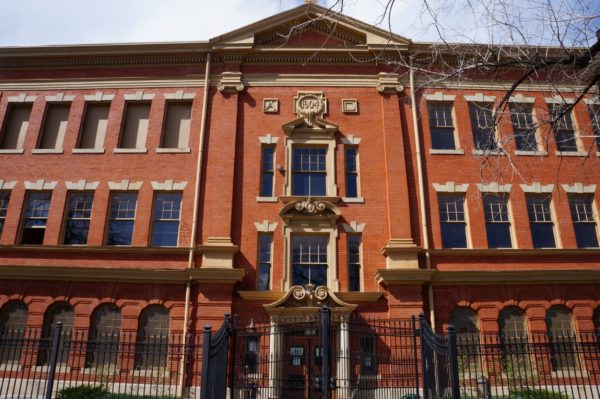 The Evans School is located at 1115 Acoma St. (Photos by Thomas Gounley)

A new era has begun for the Evans School in the Golden Triangle.

The former elementary school at 1115 Acoma St., a protected Denver landmark that has sat largely unused under the same ownership since the 1970s, sold in a two-part deal that closed Friday.

Joe Vostrejs, a founder of Denver-based City Street Investors — which is part of the joint venture that purchased the school — said the new ownership group is “committed to making it something really useful for that neighborhood.” 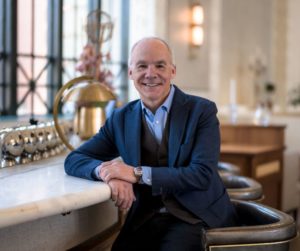 “The building has really been sitting like it is for my entire adult life, and it always seemed a little odd. Why isn’t something happening there?” said Vostrejs, 59.

Vostrejs and his partners hope to eventually open the first floor of the building to the public, and bring in food and beverage operators. Plans for the upper two floors are less clear.

“I think it’s going to take a minimum of 18 months to get things done, and it could take longer,” he said.

Last week’s sale also sets the stage for the development of the parking lots that surround the school. 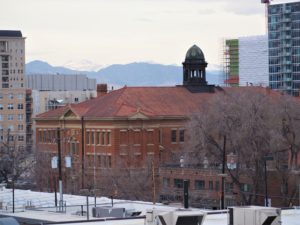 The red-brick school was built in 1904 and used for nearly 70 years. Like Mount Evans, it is named after John Evans, governor of the Colorado territory from 1862 to 1865.

Brothers Richard and Alan Eber purchased the school from Denver Public Schools in 1974 for $620,000, according to previous reporting by Westword. The building sat vacant for decades, prompting criticism through the years from some who wanted the structure repurposed.

The building was renovated in recent years and has seen some use. It has played host to occasional events and served as short-term office space, specifically for political campaigns.

The property has been on the market for years, and reports by news outlets in the 1990s and 2000s refer to attempts by individuals and groups to buy the property from the Eber family, which owned the property under the name Continuance LLC.

The first stage of last week’s deal saw the Eber family sell 1115 Acoma St., a parcel that consists of the school and the large parking lot to its north, to Lennar Multifamily Communities, which develops apartment complexes.

Lennar paid $18 million for the parcel, according to public records. The company is also said to be purchasing the parking lot to the west of the school, but that sale had not been recorded as of press time.

BusinessDen reported in June that Lennar was under contract, and The Denver Post later reported the detail about the planned flip of the school itself.

Prior to Lennar, another multifamily developer, Washington-based Holland Partner Group, was under contract to buy the property. But that deal fell apart by the end of last year, allowing Lennar to make its entrance.

Vostrejs told BusinessDen that he believes Holland planned to maintain ownership of the former school and use it as office space. But Lennar knew from the start it just wanted the surrounding land, and tasked NAI Shames Makovsky with finding someone interested in the school, he said.

The City Street-Columbia Group partnership wasn’t the only interested party.

“We definitely felt there was a little bit of a beauty contest going on there for a while,” Vostrejs said.

Plans for the parking lots 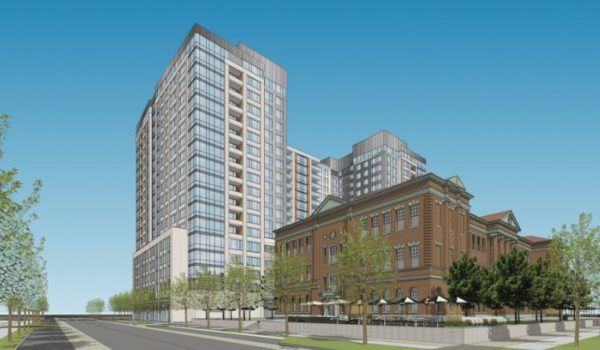 A rendering included in documents Lennar submitted to the city.

A local Lennar executive did not respond to a request for comment Monday.

The company owns four complexes in the Denver area, including Canvas at 2401 Blake St. and Radiant at 2100 Welton St.

Lennar is familiar with the Golden Triangle. It paid $18.5 million last year for a 2.1-acre site in the 900 block of Acoma and Bannock streets, just a block from the Evans School. Crews recently began work on a 17-story apartment complex on a portion of the site.

Lennar wants to build on a similar scale around the Evans School.

In August, the company submitted an early-stage development proposal to the city for the land to the west of the school, at the corner of 11th and Bannock streets. It proposed a 19-story building with 479 units.

That proposed building would cover just a portion of the land Lennar now owns. The company also wants to build on the parking lot to the north of the school. And it is still working to purchase the parking lot Continuance LLC owns at the southeast corner of 12th and Acoma streets, which was not included in last week’s sale.

Plans for the school 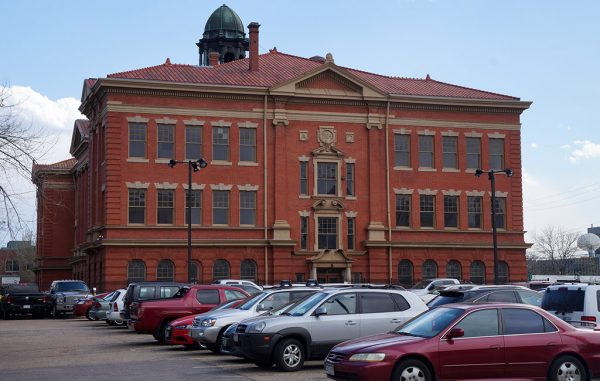 The school is partially surrounded by large parking lots.

Denver’s Wash Park neighborhood has Gaylord Street. Platt Park has South Pearl Street. In Vostrejs’ mind, the Golden Triangle “lacks a center of gravity,” despite its cultural attractions such as the Denver Art Museum.

“The school is just such a perfect opportunity to make that happen,” he said.

The building itself is in good shape, Vostrejs said. Beyond the hoped-for restaurants on the ground floor, however, plans are less clear.

“The upper floors are a bit of a conundrum for us,” Vostrejs said, adding there’s about 30,000 square feet between the second and third floors. “Certainly it would make wonderful office space, and that’s certainly a use we’ll consider.”

Vostrejs said he and his partners plan to solicit community feedback in the coming months. He noted that his firm, City Street Investors, co-developed Union Station.

“A lot of those same principles that we used at Denver Union Denver, we’d like to apply here,” he said.

The Evans School is located at 1115 Acoma St. (Photos by Thomas Gounley)

The Golden Triangle “lacks a center of gravity,” according to Joe Vostrejs. “The school is just such a perfect opportunity to make that happen.”