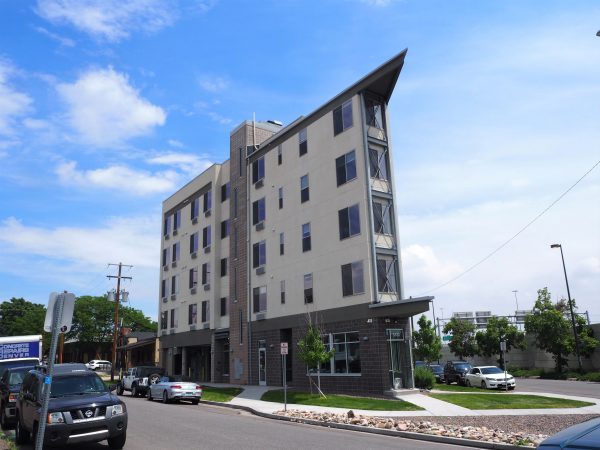 The 20-unit apartment building at 3344 N. Mariposa St. in Denver is being converted into the Comma Hotel. (Thomas Gounley)

A recently completed apartment building in LoHi is about to see a lot more turnover.

The apartment building was completed in 2017. Schmergel said the company purchased it last May — for $7 million, according to public records — with the hotel conversion in mind.

At 50 percent, “The building was not very well-leased at the time that we purchased it,” Schmergel said.

Schmergel estimated the one-bedroom units that are rented are going for about $1,500 or $1,600 a month. But all the residents will be moving out by the end of the summer, ahead of the hotel’s opening.

A spokesman confirmed that the city has received an application for a hotel license for the property.

Schmergel said the company hasn’t determined how much the rooms will rent for on a nightly basis. He estimated Infinity is spending $10,000 to $15,000 per unit to convert them for hotel use. Additionally, the company is spending about $300,000 to open a coffee shop in the building’s one retail space, which hasn’t been occupied.

“It’s open to the neighborhood, but also the front desk to the hotel,” he said of what will be called Comma Cafe.

The line between apartment buildings, Airbnb-type units and hotels has begun to blur in recent years, as landlords and third-party companies look to tap into the difference between what consumers will pay to stay for a night and what a long-term lease translates to on a nightly basis.

On a local basis, San Francisco-based Sonder is operating what is essentially a hotel in a former hostel in Uptown, and has plans to add more units in Denver. New York-based Mint House and Austin-based The Guild, meanwhile, are leasing chunks of large apartment complexes, then renting the units on a nightly basis. These companies tend to compare their accommodations to Airbnbs, since the units resemble apartments more than hotel rooms, but technically they get the same license from the city as a hotel does.

Denver-based Daydream Apartments is taking another approach. In April, it spent $304 million on an apartment complex near Union Station. The company plans to help residents rent out their units on sites such as Airbnb in exchange for a share of the revenue.

Schmergel said Infinity is operating another apartment-building-turned-hotel in Denver at 1525 Perry St. near Sloan’s Lake. He said that property, known as the Perry Hotel, opened this spring. Units go for about $150 a night.

Schmergel said the Comma Hotel moniker is somewhat inspired by the shape of the building — it’s triangular, so somewhat suggestive of the punctuation mark — but also references the fact that a comma “is a pause and a connection.” A good hotel allows guests to do both, he said.

The 20-unit apartment building at 3344 N. Mariposa St. in Denver is being converted into the Comma Hotel. (Thomas Gounley)

The owner bought the recently completed building when it was 50 percent leased. All residents will move out before the hotel opens this fall.

At $350,000/key plus $10-$15K to convert or $365,000/key not including conversion of common area/coffee for hospitality use i.e. which adds another $15K/key or now closer to $380,000 the proposed hotel is going to have to generate some serious REVPAR to justify the expenditure.

Granted unique location and potential demand for transient lodging in the area but may wish to consider due to configuration orienting to extended stay or similar and operate as a limited service operation.

May make more sense to convert to a condominium and offer developer financing for revenue stream and tax efficiency.

I agree Joseph, the hotel thing makes no sense. No front desk, no amenity such as pool etc is such a poor way of transmitting hospitality and such half a** operations earn little loyalty. Another example of a poor investment at today’s sky high prices. The lesson is that when investing your money screen out the investment hardcore and always use a approach that all money manager are door bells until thoroughly tested.