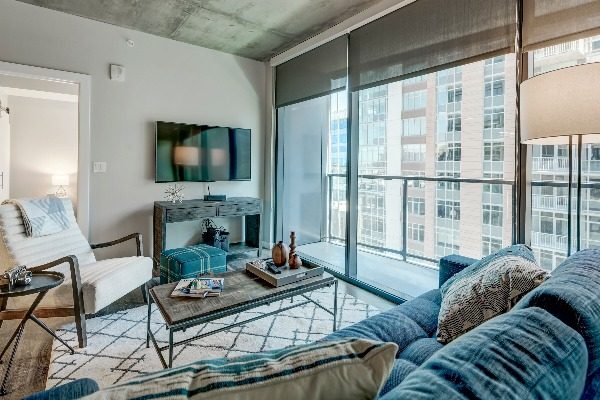 The Mint House is the newest hybrid of Airbnb, hotel and apartment to take over units in Denver’s LoDo neighborhood. (Photos courtesy Mint House)

Another company operating at the three-way intersection of hotels, Airbnbs and apartments has entered the Denver market.

New York-based Mint House, founded in 2017, has leased all 20 units on the eighth floor of The Grand Apartments at 1777 Chestnut Place near Union Station. It expects to begin renting them on a nightly basis in the coming weeks.

Fifer said the company believes it will get its hotel license by June.

“We would like to get to about 400 units across the city over the next year or two,” he said. “We think Denver can be one of our top five or top 10 markets in the country.” 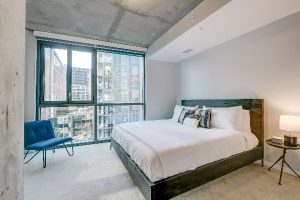 Guests can book and stay at apartments in LoDo’s The Grand Apartments at 1777 Chestnut Place.

Fifer said the company is in talks with other apartment complex owners around Denver, but declined to disclose specifics. The company targets apartment buildings that offer the equivalent of a four-star or higher hotel experience with pools, gyms, quality lobby areas and more, Fifer said. It looks to lease blocks of between 20 and 200 units.

Mint House customers can find and book places to stay on the startup’s website or app, and through traditional hotel booking sites and short-term rental sites such as Airbnb and HomeAway. Users can download the Mint House app to check in and out, connect to WiFi, use the 24/7 concierge and more.

Nightly rates at the Mint House units will average $200 to $250, according to Fifer.

“It varies, of course, by time or season and whether it’s the weekend,” he said.

The remainder of the units in The Grand, which opened last year, are being rented on traditional long-term leases. As of Friday, the cheapest available unit on the complex’s website, a studio, was $1,605 a month. 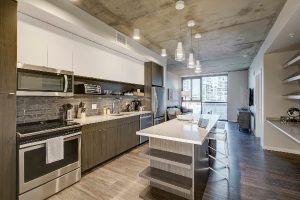 Mint House provides more amenities than a regular hotel, such as a kitchen.

Will Lucas started Mint House 2 1/2 years ago to give business travelers another option besides staying in a hotel, one that was convenient to book and provided more amenities, such as a laundry and kitchens.

Along with Denver, Mint House is currently operating in Nashville, Detroit, Indianapolis and Miami. Units in Minneapolis and San Diego are coming soon.

The startup recently raised a $15 million round of funding. While Fifer said Mint House eventually will open in the country’s biggest cities, for now, the startup is targeting tier two cities.

“A lot of those cities are lacking the high-end hotels that you can find in the Bostons and New Yorks and LAs,” he said.

Mint House’s business model parallels that of The Guild, an Austin-based startup that according to records is taking approximately 40 units in an apartment complex in Riverfront Park.

Also active in Denver are San Francisco-based Sonder, which has leased an entire building in Uptown, and Denver-based Daydream Apartments, which recently purchased an apartment complex by Union Station and is implementing a “homesharing” program that will encourage long-term tenants to rent out their units.

The Mint House is the newest hybrid of Airbnb, hotel and apartment to take over units in Denver’s LoDo neighborhood. (Photos courtesy Mint House)

Mint House is the latest company operating at the three-way intersection of hotels, Airbnbs and apartments to enter the Denver market