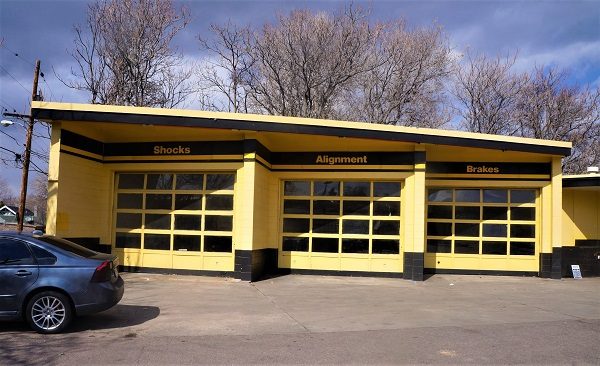 A Neapolitan-style pizzeria is taking over the former Meineke at 4839 E. Colfax Ave. (Photos by Libby Flood)

The owner of a former muffler shop along East Colfax Avenue is putting some dough into it.

The Robert L. Naiman Co. submitted a site-development plan to the city in late February, indicating it plans to convert the former Meineke at 4839 E. Colfax Ave. into a pizzeria.

Meineke, which is in the Park Hill neighborhood, closed last year.

The as-of-yet unnamed restaurant will be the work of local restaurateur Brad Anderson, who has had a hand in a number of Denver-area restaurants, including Trinity Grille, Rocky Mountain Diner, Castle Cafe and Chopper’s Sports Grill. The latter two remain open.

Anderson said he’d driven by Meineke for years, and the space was listed for rent right as he was looking into opening a pizzeria. He signed a lease on the building early last year, and hopes to open in November.

“It will be a Neapolitan-style pizza and Italian restaurant,” Anderson said. “I was very interested for the last 10 years about this ‘true Neapolitan pizza’ concept and how it started. The word ‘Neopolitan’ has gotten bastardized in a way — Pizza Hut can say they make a Neapolitan pizza.”

Anderson took classes and was certified by Naples, Italy-based nonprofit True Neapolitan Pizza Association (Associazione Verace Pizza napoletana, or AVPN, in Italian). AVPN sets forth the rules that determine the validity of Neapolitan pizza, which focuses mainly on ingredients and processes used.

The pizzeria also will have a full bar, Anderson said.

The building will undergo a “complete remodel” indoors, Anderson said. The 2,400-square-foot space will seat about 70 in the winter, including 20 seats at the bar overlooking the open kitchen, which will feature a wood-fired stove from Italy.

During the summer, the seat count will reach 130. He plans to put a large patio under the building’s retro overhang, left over from its pre-Meineke days as a Phillips 66 gas station. 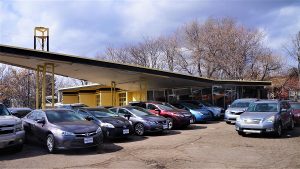 The retro building used to be a Meineke auto repair shop, and before that, a Phillips 66 gas station.

“We’re planning some fun things for out in front of the building,” Anderson said. “We’re going to put four bocce courts out underneath the awning, and we’re going to put in an urban garden with about eight planters for vegetables and herbs in the summer months. And of course we have the garage doors that’ll open up.”

Semple Brown Design and engineering firm Proof Civil are involved with the building.

The Robert L. Naiman Co. has owned the property for decades. The company most recently made headlines in October when it purchased the former Phil’s Place building in RiNo for $1.4 million.

Also coming to this stretch of Colfax are a sushi joint and a deli. 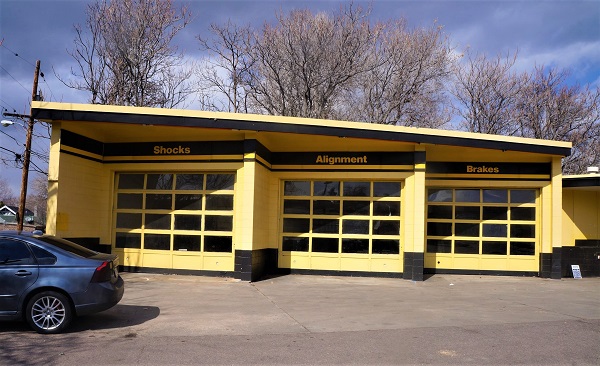 A Neapolitan-style pizzeria is taking over the former Meineke at 4839 E. Colfax Ave. (Photos by Libby Flood)

You might say they’re putting some dough into it.