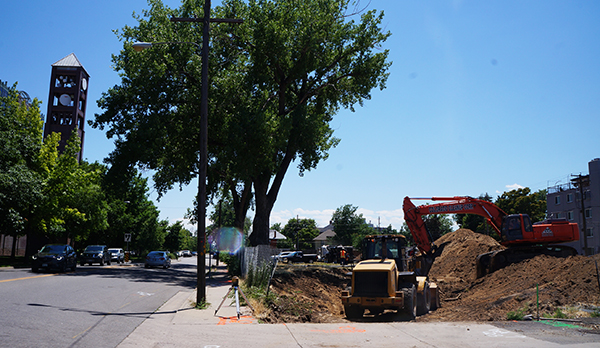 A Washington state-based apartment developer with projects along South Broadway and in the Golden Triangle has found another site to its liking.

Vancouver-based Holland Partner Group purchased 355 Logan St. on Monday for $10.5 million, according to county records. That works out to $238 per square foot.

The 1-acre site, just off Speer Boulevard and across the street from television station 9News, is undeveloped.

The property was sold by 325 Logan St LLC, which purchased it in June 2012 for $5.39 million, according to records. Records show the LLC is owned by a Scott Sepic.

Chris Cowan and Bryon Stevenson of ARA Newmark represented both the buyer and seller. Cowan said the seller went through the entitlements process, including submitting a site-development plan to the city.

The plan, which has been approved, is for an eight-story building with 171 units: 92 one-bedroom, 74 two-bedroom and five three-bedroom spaces.

The plan, drawn up by Kimley-Horn, calls for 245 parking spaces.

On Tuesday, a day after the deal closed, bulldozers already were at work at the site. They aren’t the only construction equipment in the area. Mill Creek Residential is building Modera West Wash Park, an eight-story apartment complex, on the same block.

Holland owns 10 apartment complexes within Denver city limits, according to its website. Properties it has developed include Union Denver and Platform at Union Station.

At the end of April, Holland paid $12 million for the 2.36-acre lot at 99 S. Broadway in Denver. The company plans to build a three-story apartment complex with about 230 units at the site.

Holland is also under contract to purchase the Evans School, a century-old former elementary school at 1115 N. Acoma St. in Denver. The firm is interested in building apartments on the parking lots that surround the school.

Holland Partner Group this week started moving dirt on a lot near 9News.

Oh how lucky us true Coloradans are… More Apartments .. Thank you Holland and Chris Covan, oh lets not forget Bryan.. You guys are so awesome! Thank you for the over crowding… Thanks for thinking of Colorado’s land… Thank you! So excited more distraction… I cannot wait for the day we only have cement to walk on…Thank you Washington base developer.. What would Colorado do without all of you… And thinking of our beautiful State.

This has been an ugly heavily weeded vacant lot with a broken down fence, along with trash and construction debris for decades. Nothing but an eyesore. Kudos to the developer!

The alternative to apartments/condos in central Denver is paving wayyy more agricultural land on the prairie and creating more congestion in the process. I only wish this development were taller!

I’m trying to understand how the developers in question are responsible for the over crowding. It seems to me the folks who have made our state so desirable are the real “bad guys”.

If only we had the guts to make Colorado a less desirable place to live…! 🙄