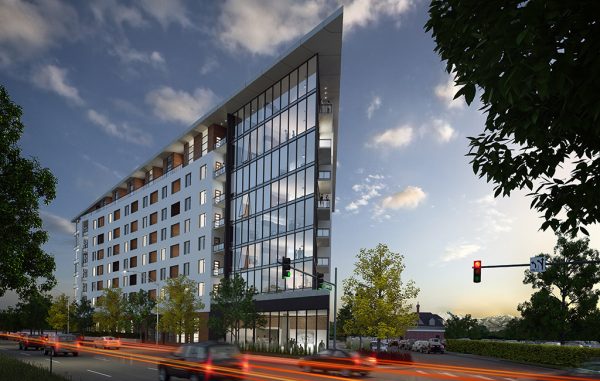 Rendering of the eight-story complex at Speer Boulevard and Grant Street. (Davis Partnership)

Two-hundred-fifty more apartments are coming to Speer Boulevard, a thoroughfare that boasts a handful of new apartment towers with a half-dozen more under construction.

Mill Creek Residential is planning to build an eight-story complex on the south side of Speer Boulevard and Grant Street. The Dallas-based developer purchased a 1.3-acre site for $10 million last week, city records show. The property includes a small office building.

Mill Creek’s Brian Wynne said his firm has dubbed the project Modera West Wash Park, consistent with its nomenclature at other new apartment buildings around town.

“It was really a no-brainer,” Wynne said. “We think it’s really unique to be in an urban environment, but near a tree-lined, walkable neighborhood.”

The seller in the deal, which closed Sept. 1, is the Colorado Visiting Nurse Association. Mill Creek’s lender is Fifth Third Bank. John Winsted with JW Cos. brokered the sale. 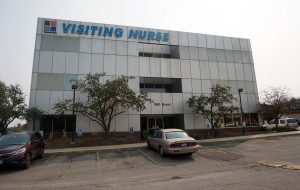 A small office building was included in the $10 million sale. (Lynn Yen)

Wynne declined to quote hard costs and said rents are not yet locked in. He said Mill Creek will spend two months doing utility work on the site.

The seller, which operates an office on the property, will move out on Dec. 1 so the multifamily developers can begin demolition. The hope is to start handing out keys to tenants in January 2020.

Modera West Wash Park will compete with new residential construction on the south side of Speer, including MyBlock and Country Club Towers.

The complex also adds a new neighborhood to the Mill Creek map. The firm is leasing 275 units at Modera Observatory Park near the University of Denver, has two projects underway in RiNo and 200 more units under construction in Cap Hill.

Rendering of the eight-story complex at Speer Boulevard and Grant Street. (Davis Partnership)

Any idea on what this does for the park there? Those little green spaces really do wonder for the locals in the area. I would hate to see that go.

Seriously more apartments..! STOP! Ridiculous! Once the economy crash’s, and it will, all those apartments and townhomes… – Will be begging for renters. In addition all of these new apartments/condos – can they get any uglier…

Stop whining all the time and grow up. You guys live in a major US city. Let it be a city without trying to complain or stop it from progressing. Move if you don’t like it.

Its not even technically in the Wash Park neighborhood. It’s in Denver’s Spear neighborhood, south of Cap Hill.

I think it will help create a nice fabric along the south side of Speer next to 9 News. The set-back from Speer needs to be appropriate for the boulevard. The Gables is terrible.