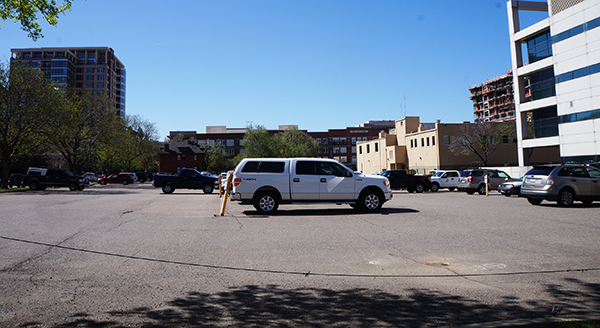 Lennar Multifamily Communities wants to build a 17-story building with 389 apartment units on the parking lot at 921 and 951 Acoma St. Photo by Thomas Gounley.

There are new details about two developers’ separate efforts to bring more apartment towers to the Golden Triangle.

Lennar Multifamily Community has submitted a site-development plan to the city for a 1.38-acre parking lot it purchased last month. And Holland Partner Group has given the first clue of what it hopes to do with land surrounding the historic Evans School, which the company is under contract to purchase.

Lennar, a component of Miami-based homebuilding giant Lennar Corp., wants to build a 17-story tower with 389 apartments on the lot at 921 and 951 Acoma St., according to its site development plan, which was submitted last week.

The development also would have restaurant and retail space on the first floor, and five floors of parking with a total of 460 spaces, according to the plan.

The company has not submitted a site plan for the 990 Bannock St. parcel, although in December it submitted a more preliminary “project concept,” indicating it is interested in building another apartment tower on the 0.74-acre lot.

A Lennar executive in Denver did not respond to a request for comment. 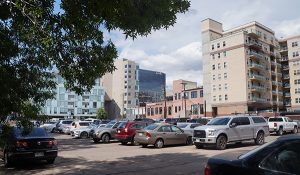 Holland Partner Group has submitted a project concept to the city describing a 17-story apartment tower at 1120 Acoma St., which is currently a parking lot. Photo by Thomas Gounley

The lot is owned by Continuance LLC, which also owns the 1.5-acre Evans School property, which includes a large parking lot north of the school. BusinessDen reported in April that Holland is under contract to purchase the school; Holland has not submitted any information to the city regarding that site.

The project concept for 1120 Acoma St. calls for a 17-story apartment tower at the side, with ground-floor retail. It refers to the project as “Evans East.”

Lennar Multifamily Communities wants to build a 17-story building with 389 apartment units on the parking lot at 921 and 951 Acoma St. Photo by Thomas Gounley.