Rendering of the planned 27,000-square-foot gym in Centennial. (Valley Climbing and Fitness)

“I do not think the market is well-served around here,” Emerson said. “I just think there is a real opportunity in the market for family and youth.”

The gym’s name is a nod to California’s Yosemite Valley, home of iconic climbing destinations El Capitan and Half Dome.

“When you are trying to build out a youth presence, (kids) don’t know climbing or climbing etiquette,” Emerson said. “We’re dedicating a big portion of the climbing areas to the youth side that’s 100 percent isolated from the rest of the climbers.”

The remainder of the gym will be set aside for CrossFit, yoga and other fitness.

Emerson, a California native, moved to Colorado about 11 years ago. He said he received a free climbing class for his 30th birthday and became instantly hooked, buying climbing gear from REI that same day. The sport has since become a family endeavor – his 10- and 8-year-old sons compete. 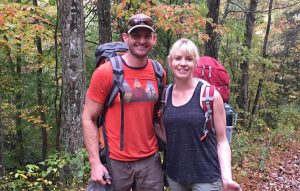 He said the project will cost $6.5 million and is being funded through an SBA loan, personal funds and money from private investors.

Valley has hired Built Construction for the buildout of the gym, the same firm that worked on Louisville’s recently launched Evo Rock + Fitness. Bulgaria-based Walltopia is designing The Valley’s climbing walls.

Emerson joins a number of other entrepreneurs making a go at the indoor climbing industry along the Front Range.

Other large facilities in the works include Movement Climbing + Fitness in RiNo, slated to open this summer, Gravity One in Broomfield, and the Longmont Climbing Collective.

“Ultimately, the sport is just growing so fast that it can support multiple gyms in this area,” Emerson said. “There is so much of a population down here and there is so little in terms of gyms.”

Rendering of the planned 27,000-square-foot gym in Centennial. (Valley Climbing and Fitness)

A 39-year-old IT exec plans to build a 27,000-square-foot climbing and bouldering facility at 6560 S. Peoria St., with dedicated space for kids.