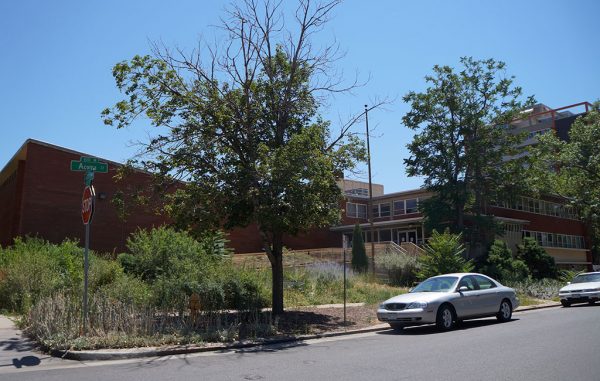 Mi Casa Resource Center sold its former headquarters in Baker to Vukota Capital Management on July 14. The Greenwood Village firm plans to build 171 apartments in a five-story, U-shaped complex on the site. It bought the Mi Casa property and an adjacent house on its south side for a combined $6.1 million, city records show.

Paul Slye, president of VCM Real Estate, said the firm entered the neighborhood intending to build medical facilities that would complement the nearby Denver Health Medical Center on Bannock Street.

But when Vukota zeroed in on 360 Acoma St., he said, it decided to provide housing for employees at the hospital and nearby offices like Anthem BlueCross Blueshield instead.

“It’s a great fit because it’s working with and amidst large employers in Denver,” Slye said. 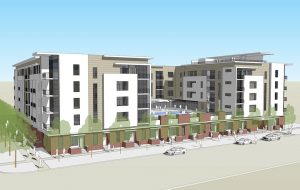 Rendering of the planned 171 apartments. (Gkkworks)

Vukota Capital Management was founded by Tom Vukota in 2010. Today the firm owns more than 3,000 apartment units in Colorado, Slye said. The project at Fourth Avenue and Acoma Street will be its first ground-up development.

Vukota’s construction budget is over $30 million. It aims to complete design work over the next eight months and hand out its first keys to tenants in 2019.

The project’s architect is Gkkworks. Slye said Vukota worked with Gkkworks managing principal Brian Klipp to design a complex in a way that will fit into the historic neighborhood. Design features include brick walk up stoops fronting Fourth Avenue and Acoma Street as a nod to similar architecture at older buildings in the vicinity.

“We’re trying to reflect what’s around us,” Slye said.

Amenities include a fitness center, yoga studio, a bike repair room/storage room, an outdoor pool and a rooftop deck.

The complex will include one parking space per unit, plus extras for guests. One level of parking is below grade and one is above; neither is visible from the street.

The general contractor on the project is MPC.

This stretch of South Broadway is on a redevelopment kick.

Holland Partner Group is floating a plan to build 270 more apartments on the northwest corner of Bayaud Avenue and Broadway, Wood Partners is digging into another 187 units at Alta Sobo Station and Zocalo Community Development is turning the boarded-up First Avenue Hotel into more than 100 apartments.

Ronda Terry, Denver is a progressive city. If your not moving forward then your moving backwards. If you want to live in a city that isn’t progressive then move to Detroit. No one needs a stupid NIMBY like like you in our great city. The economy is part of what makes Denver so great, you don’t like it well then move, I’m so sick and tired of hearing from you small no good group of NIMBY’s who have nothing better to do than to try and halt a progressing city. If you don’t like it then maybe you’ll be better off relocating to a city more like Colorado Springs. But get out of Denver because no one hear wants you here, technically your making it more crowded here so why don’t you just leave.