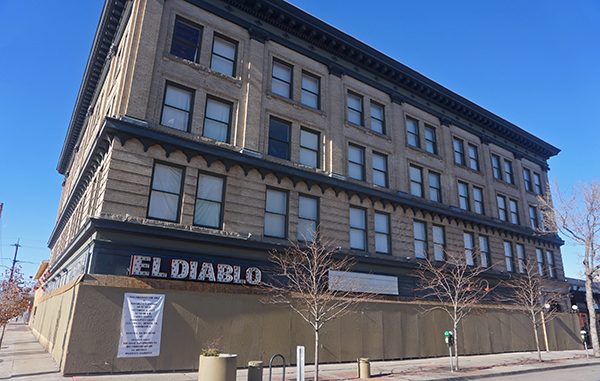 The First Avenue Hotel building was sold at an auction in December 2015. (BusinessDen file photo)

A long-vacant eyesore on South Broadway is about to get a $32 million makeover.

Zocalo Community Development has signed on to develop the boarded-up First Avenue Hotel on Broadway into more than 100 affordable housing units with ground-floor retail and an adjacent parking structure.

Zocalo seeks to renovate the property last home to El Diablo restaurant, which sold at auction in December 2015 after a bankruptcy and foreclosure process that dragged on nearly three years, into a mixed residential and retail development using a financing package that includes low-income and historic tax credits.

Construction is scheduled to start in October.

Zocalo principal David Zucker said the design would restore the existing structure to something akin to its original use, as less-expensive downtown housing.

“This was essentially affordable housing when it was built in 1906 in that it was a single-room occupant (hotel),” Zucker said. “Now it’s affordable, in part, because they’re smaller studios and one-bedrooms.”

The project will go by its old name, Zucker said: 1st Avenue Hotel.

Project plans by JG Architects call for restoring the hotel structure into 50 residential units, then building a five-story addition with 56 units behind the original hotel. Zucker said the apartments – studios and one-bedrooms – would average 350 square feet.

Rent would cost between $850 and $900 per month, Zucker said, depending on whether it is a studio or a one-bedroom. 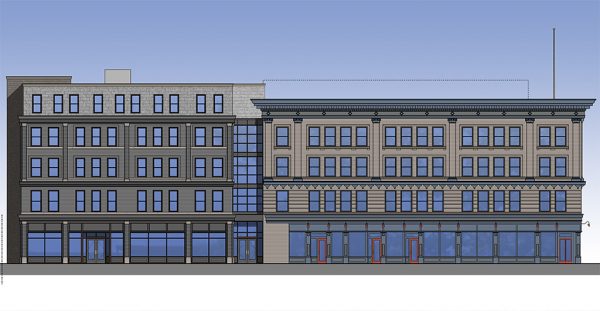 In the original hotel, the 5,000-square-foot former restaurant space will be divided into two retail units. Zucker said the developers are looking for a pair of restaurant tenants – a bakery or coffee shop that would be open in the morning and a second concept for the afternoon and evening.

In the five-story addition, the ground floor will be reserved for resident amenities rather than retail, Zucker said, like a conference room and management offices. Plans also call for a parking garage with 53 spaces in a two-story structure west of the residential development on First Avenue.

The next chapter for the one-time hotel has been a long time in the making. Businessman Jesse Morreale purchased the half-acre property in 2008 for $2.5 million, Denver property records show, opening restaurants El Diablo and Sketch two years later.

But the building’s ownership filed bankruptcy in 2012 following a dispute over building safety with the city of Denver. The restaurants closed in 2013.

Zucker said Zocalo, in addition to being hired by Digital Cowboy as the site’s developer, also has an ownership interest in the property alongside other local investors.

Speaking to a neighborhood group in Baker, Zucker outlined a funding plan that would include low-income housing tax credit and historic investment tax credit financing, as well as an affordable housing loan from the city and county of Denver. Additional funding sources would include equity and a construction loan.

In order to make the redevelopment eligible for historic tax credits, Zucker said Zocalo is applying to list the property first on the Colorado State Historic Register, and ultimately the National Register of Historic Places. He said the development is on track to receive building permits in October.

For now, the project is still in planning. But Zucker said the designs are unlikely to shift substantially.

“This is a historic building and this is a tight site,” he said. “This is a little bit of a boat being built in a bottle – there’s not a lot of room.”

The First Avenue Hotel building was sold at an auction in December 2015. (BusinessDen file photo)

A long-vacant former hotel and South Broadway eyesore is about to get a $32 million makeover.

I loved El Diablo, it was great! Do we always have to turn everything into housing? Why can’t we have some diversity? Turn it into a place where people can do different things like help others like the YMCA used to do.

How do we get a hold of them for renting a room?

I’m sure in a couple years when they’re ready to start accepting applications, there will be advertisements and a rental office. Ask your question again in January 2019.

Hi Michael,
The building was renamed The Quayle and is now accepting applications. If you are still interested please let me know.