Kindness Yoga members participate in a class at the Platte Street location. Photos by George Demopoulos.

It didn’t take long for an empty yoga studio in Golden to flow into new ownership.

Kindness Yoga will move into Vital Yoga’s former studio in downtown Golden on Monday after the space sat empty for less than a month.

It’s the sixth Kindness Yoga location that company founder Patrick Harrington has opened since launching the company in 2000 and the first outside of Denver.

“Vital has been there for 12 years, and they did a tremendous job creating the physical space, so it’s a beautiful and easy way for us to step into a location that’s already in place,” Harrington said. “I’ve taught there multiple times, and I love the spot.” 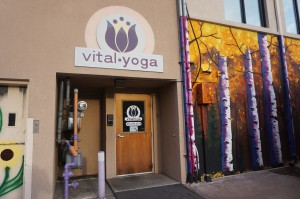 Kindness will move into the former Vital Yoga studio in Golden.

It’ll only cost Harrington about $10,000 to convert the studio, he said. That will include fresh paint and a new stereo.

Harrington said he’s paying $3,500 per month to rent the 2,500-square-foot space, located on the second story of the Foss building at 1224 Washington Ave. in Golden.

Kindness will charge $130 for unlimited monthly classes, and members can visit any of the company’s six studios.

Vital Yoga ceased operations there this month; it will continue to operate its studio at 3955 Tennyson St. in Denver.

The move marks the second new Kindness studio in the seven months – the company added its fifth location on Platte Street in July.

Harrington said that he was seeking space to open a studio in RiNo and Sloan’s Lake earlier this year, but he has paused to focus on the company’s current operations.

“Our problem right now is making sure we only choose strategic openings because our teachers only have so much time,” he said. “We decided to back off from (RiNo, Sloan’s Lake and St. Anthony’s) given that we’re opening in Stapleton next year.”

If all goes according to plan, Harrington will open the seventh Kindness studio in mid-2016 in the Stanley Marketplace, he said.

Kindness Yoga members participate in a class at the Platte Street location. Photos by George Demopoulos.