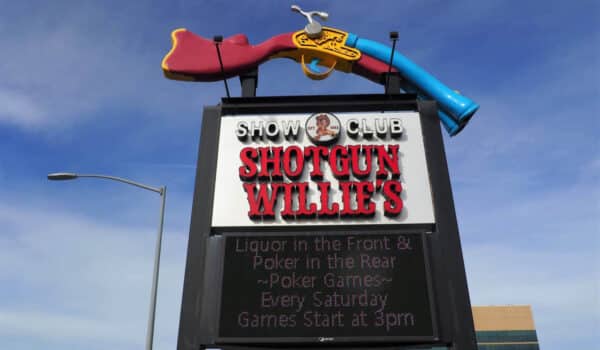 Shotgun Willie’s is one of the Denver area’s most prominent strip clubs, with a sign along Colorado Boulevard in Glendale. (BusinessDen file photo)

After more than three years of combative litigation, and with a headline-grabbing trial just one month away, a wrongful death case involving a Glendale strip club has been settled.

Attorneys for Dory Wright, the widow of former Kroger executive Randall Wright, informed an Arapahoe County judge Wednesday that their client has “entered into a settlement agreement that resolves all claims” she has made against Shotgun Willie’s.

The terms of the settlement are confidential. It is expected to be finalized within 45 days.

Judge Peter Michaelson responded to the news by canceling a 10-day trial that was scheduled to begin Jan. 9 in his Centennial courtroom. He also canceled a second, four-day trial in April that would have determined whether Shotgun Willie’s fraudulently transferred assets to prevent Dory Wright from seizing them if she won the wrongful death case.

Attorneys for Wright and Shotgun Willie’s declined to comment on the settlement. Attorneys for defendants Derek Hendricks and John Liprando did not respond to requests for comment.

Randall Wright, 48, got into a fistfight with another man that led to a chase through Shotgun Willie’s on the night of May 2, 2019. Wright was then tackled by Hendricks, a bartender, and died a short time later. Dory Wright sued Hendricks and the club, claiming Hendricks used a chokehold. The defendants denied that and blamed Wright’s bad heart.

Liprando, a real estate broker with SullivanHayes, was a friend of Wright’s and took part in the fight that led to his death. He was added as a defendant in the case earlier this year after Michaelson determined he could be partly to blame for Wright’s death.

In the 1,153 days between Dory Wright filing her lawsuit and Wednesday’s settlement, the case took several twists and turns. None were stranger than the death of Stephen Long, a well-respected attorney who was representing Shotgun Willie’s in the case. Long died Oct. 1 after an apparent medical incident at the club, as CBS Colorado first reported.

The case was contentious throughout. In September, lawyers for Dory Wright accused lawyers for Shotgun Willie’s of leaking scandalous details from a deposition to the Glendale Cherry Creek Chronicle. The newspaper, which was co-founded by the husband of the club’s majority owner, reported Randall Wright was having at least one extramarital affair.

The club’s majority owner is Deborah Dunafon, wife of Glendale Mayor Mike Dunafon. Plans for a sale of the club ended after the pandemic began in 2020, forcing it into bankruptcy. Business improved in 2021 and the club emerged from bankruptcy that summer.

Shotgun Willie’s is one of the Denver area’s most prominent strip clubs, with a sign along Colorado Boulevard in Glendale. (BusinessDen file photo)

The terms are confidential. It comes one month before a January trial and more than three years after a lawsuit was first filed.