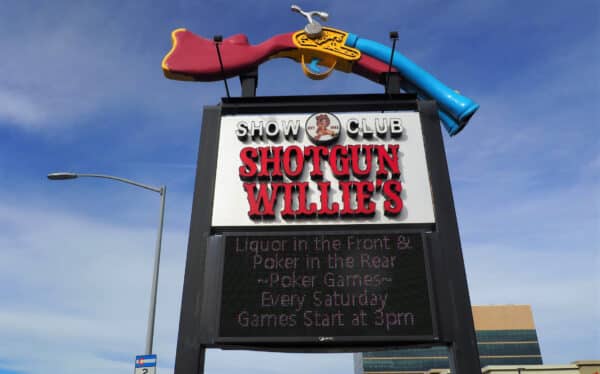 Three years ago, Randall Wright got in a fistfight at the Shotgun Willie’s strip club in Glendale and died soon after at a Denver hospital. Depending who you ask, he was either choked to death or suffered cardiac arrest.

In November, it could be up to a jury to decide what — or who — killed the Kroger executive.

Wright, 48, was celebrating a friend’s birthday on May 2, 2019. At 10:19 p.m. that night, surveillance footage shows a 27-year-old man named Ibrahim Mazgaldzhiev talking to Wright and two friends of Wright’s, John Liprando and Kenneth Brugh, when Liprando shoves Mazgaldzhiev.

Attorneys dispute whether Wright or Mazgaldzhiev threw the first punch, and it’s unclear from the dark security footage that both sides point to. But Wright was the first to connect, with a hard right jab to Mazgaldzhiev’s face that sent him backwards. Wright then chased after Mazgaldzhiev, with a bartender in pursuit.

That bartender, Derek Hendricks, caught up to Wright a short time later near the club’s Glass Room. Surveillance footage from inside that room shows Hendricks, a former high school wrestler, tackling Wright and Liprando and falling on top of the two in a heap.

Wright’s loved ones contend that Hendricks slammed Wright’s head on the floor as they were falling, leaving Wright subdued, and then placed him in a chokehold for 108 deadly seconds.

“The chokehold that Hendricks applied to Wright did so much damage to Wright’s airway that it filled his throat with blood and Wright was unable to get any air until medical personnel at Denver Health were eventually able to give Wright a tracheotomy at the hospital,” Donald Sisson, an attorney for Wright’s widow and two children, wrote in the family’s October 2019 lawsuit against Hendricks and the club.

Attorneys for Hendricks and Shotgun Willie’s contend that Wright continued fighting and cursing while on the ground and that Hendricks never used a chokehold.

“Even though he was repeatedly advised to stop resisting, Mr. Wright continued to act and speak in an aggressive manner,” Stephen Long, an attorney for the club’s parent company, wrote in a court filing last October. “When Mr. Wright did eventually comply, Mr. Hendricks stopped restraining Mr. Wright.”

Both sides agree that Wright became unresponsive, was given CPR and pronounced dead that night.

But dead of what?

“Unfortunately, it appears that the event caused cardiac strain and significant stress on Mr. Wright’s heart, which it appears had been weakened by previous cardiac events and health complications,” Long claimed in his October court document. “He passed away as a result.”

Just as both sides point to grainy security footage to make their case, the plaintiff and defendants alike point to the findings of Arapahoe County Coroner Kelly Lear. Wright’s family notes that Lear determined he died of asphyxia, which can be caused by chokeholds. Defendants note that Lear could not determine whether a chokehold was used that night.

In September 2019, the Arapahoe County District Attorney’s Office declined to charge Hendricks because it believed there was insufficient evidence a crime had occurred.

“This is due to significant conflicts in witness statements as to what transpired, the medical evidence and findings/opinions of the Arapahoe coroner that Mr. Wright’s underlying heart issues played a role in his death, and in consideration of the available legal defenses, specifically, self-defense of others,” Deputy District Attorney Gary Dawson wrote at the time.

If a settlement is not reached before the trial begins Nov. 7, jurors will need to determine whether Hendricks and Shotgun Willie’s were negligent and responsible for Wright’s death. Jurors will likely hear then about the reputations of Wright (an “aggressor” who “was chasing down another patron” in the defense’s words) and Mazgaldzhiev (a “typical asshole” who was “being obnoxious” before starting a fight with Wright, in the Wright family’s words).

Character could weigh heavily in the trial.

“Clarence Darrow famously observed, ‘Jurymen seldom convict a person they like, or acquit one they dislike. The main work of a trial lawyer is to make a jury like his client, or at least, to feel sympathy for him; facts regarding the crime are relatively unimportant,’” attorney Peter Middleton wrote in a court filing March 9. Middleton’s clients are Hendricks and the club.

Evidence and witness testimony in the case are plentiful, since those events of three years ago occurred in a club crowded with employees and patrons. More than 150 exhibits have already been filed with the court six months before the expected trial date. The Wright family’s lawsuit includes quotes from 16 people who were at the club that night and defense attorney filings include quotes from several more. Then, of course, there is the technology that captured it all.

Randall Wright died at a hospital after a fight at the strip club. "Unlike most cases, CCTV recorded the incident here,” a lawyer wrote in a court filing.