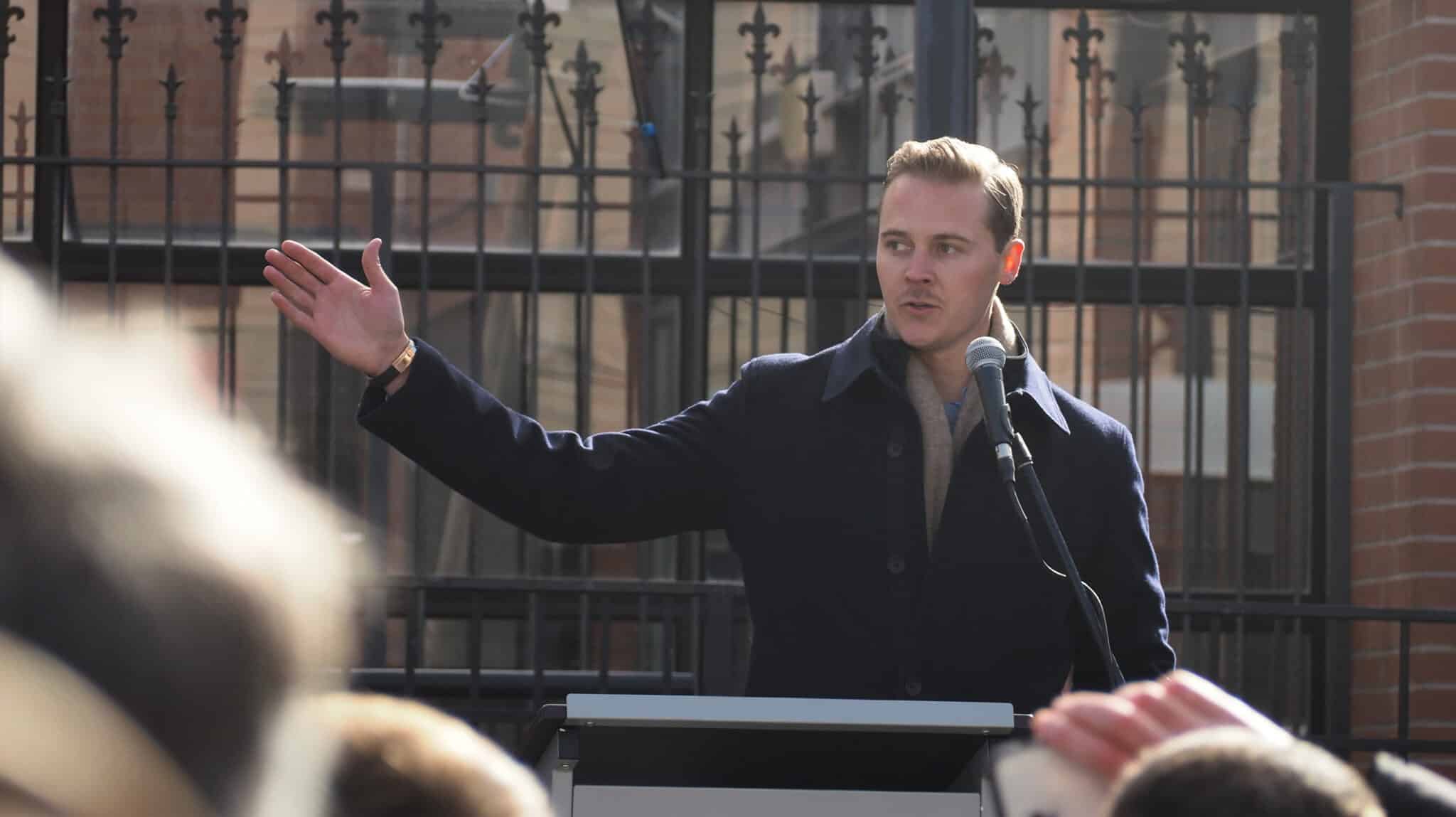 Kenneth Monfort is continuing his march through the 1900 block of Market Street.

The executive vice president of Monfort Cos., who already brought Dierks Bentley’s Whiskey Row to the block, held a groundbreaking ceremony Wednesday for his second concept there — and used the occasion to announce plans for his third.

Monfort revealed he’d closed the previous day on a purchase of the former El Chapultepec jazz club building at 1962 Market St., along with the building next door at 1320 20th St. that is home to the Giggling Grizzly sports bar. Records show he paid $5.4 million for both.

Monfort said he plans to renovate and combine the two structures for a new tenant.

“We won’t do anything to erase El Chapultepec out of the history books,” he said. “In fact, we’re going to embrace the history that place had in Denver.”

El Chapultepec opened in 1933 and closed in 2020. The building has sat unused since, although at one point the owner of the shuttered Beta nightclub planned to take over the space. The Giggling Grizzly has operated since 1996.

The buildings were sold by an entity affiliated with NAI Shames Makovsky founder Evan Makovsky. He paid $1.25 million in 2009 for the Giggling Grizzly building, and added El Chapultepec’s real estate two years later for $505,000, records show.

Monfort announced the purchase at a ceremony marking the start of the conversion of the existing 21,000-square-foot structure at 1920 Market St. into a bar and restaurant dubbed Riot House. That venue is expected to open in the fourth quarter of 2023. Both Riot House and Whiskey Row are concepts of Arizona-based Riot Hospitality Group. 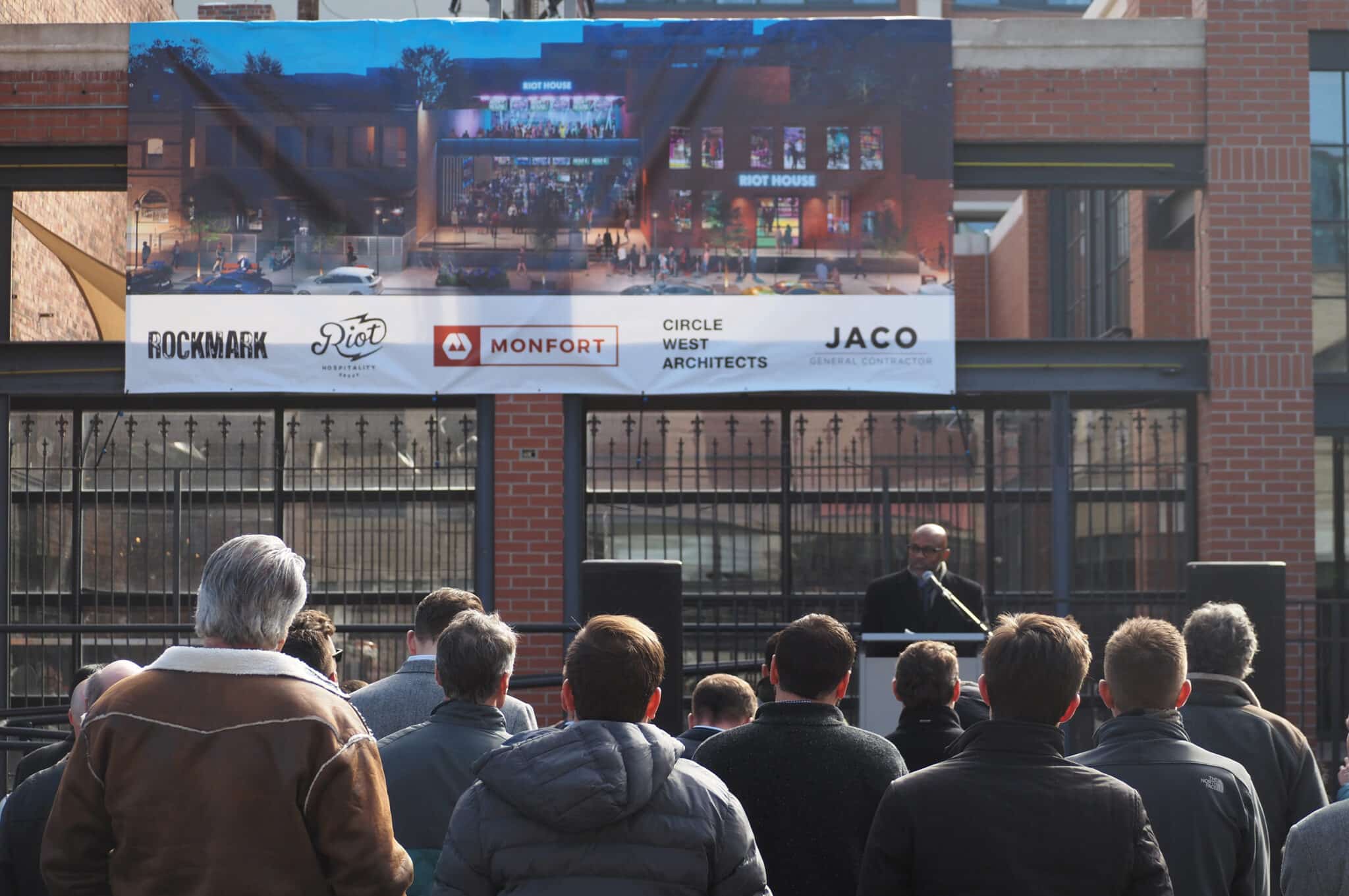 Attendees watch Mayor Michael Hancock speak in front of a rendering for the Riot House project.

The 1920 Market St. building, which dates to 1931, has a colorful past. In 2006, MTV filmed its reality show “The Real World” at the property. The building was subsequently converted back into office and retail space and was leased for years to three tenants: Brothers Bar and Grill, a wine shop and an interior design firm.

The building sold for $12 million in January with the Riot conversion in mind.

Monfort, whose father Charlie and uncle Dick own the Colorado Rockies, previously told BusinessDen he sees the area around Coors Field becoming an entertainment district that can “play on a national stage.”

Denver Mayor Michael Hancock also spoke at the Wednesday groundbreaking, saying the area was poised to “become the party central of downtown Denver.”

“Where were you all when I was in my 20s and 30s, and I was hanging out in downtown Denver?” Hancock asked.

Monfort’s entertainment vision isn’t limited to the 1900 block of Market Street. A few blocks away, at 2100 Larimer St., he and Dan Huml’s Magnetic Capital are renovating a building that will house piano bar Howl at the Moon.

Correction: The years in which the seller purchased the El Chapultepec and Giggling Grizzly buildings have been corrected.

Kenneth Monfort and partners have also begun work on Riot House down the block from Dierks Bentley’s Whiskey Row.