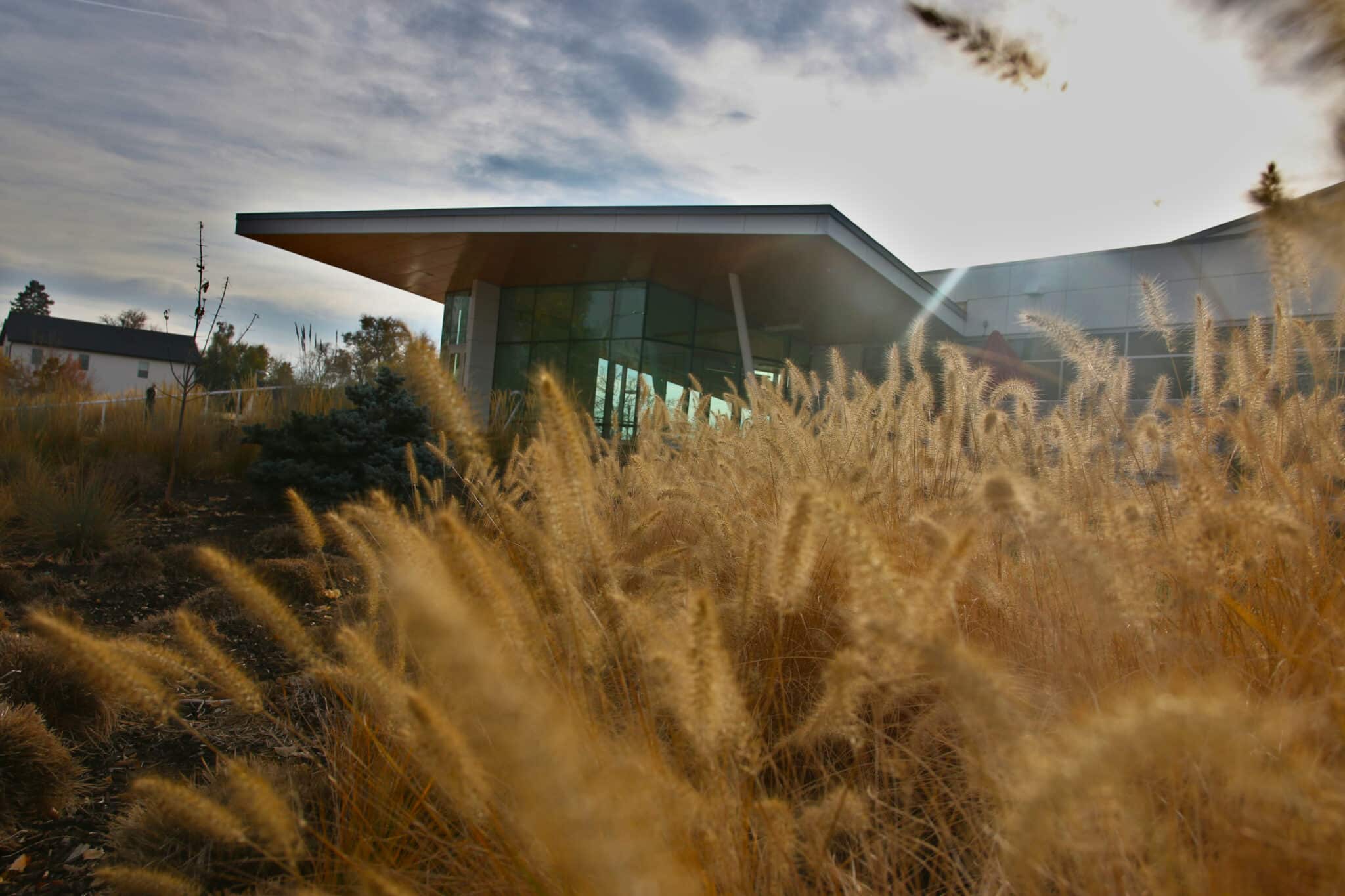 A homeless encampment opened at the city-owned property at 3815 N. Steele St., adjacent to the Denver Human Services east branch, which can shelter up to 60 people. (BusinessDen file photos)

Three people who own property a block from the sanctioned homeless encampment in the Clayton neighborhood are appealing the permit allowing it.

Michael Kennedy, Robert Reich and Robert Manning III signed the appeal to Denver’s Board of Adjustment for Zoning as members of KRMN Steele LLC, which owns three parcels totaling 0.34 acres in the 3700 block of North Steele Street.

The landowners are alleging the nonprofit Colorado Village Collaborative did not provide the city with adequate plans to address safety and hard drug use, and that the zoning administrator erroneously approved the temporary use permit for the campsite.

“The zoning administrator has failed to assess the site-specific and permit-specific impacts on this neighborhood,” the appeal stated. “These impacts are further compounded by the extended length of the permit compared to previous (safe outdoor space) permit issuances.”

This is the third campsite to be appealed to the zoning board. The board rejected appeals related to a campsite in Park Hill earlier this year, which prompted a lawsuit that is still ongoing. It is set to hear an appeal related to the Lincoln Park campsite, which was signed by 46 people, next month.

A hearing date for the Clayton appeal has been set for 9 a.m. Feb. 15.

CVC’s lease with the city runs until the end of 2022, but it could be extended through 2023 if two six-month extensions are approved by the city. Other sites that CVC has operated have lasted between six and nine months, although the Lincoln Park site will also run a maximum of two years.

Kennedy said he is a resident of Englewood who lived in Denver for 15 years. He said the best solutions to homelessness would be more permanent supportive housing or a centralized location, not by putting up tents in residential neighborhoods. 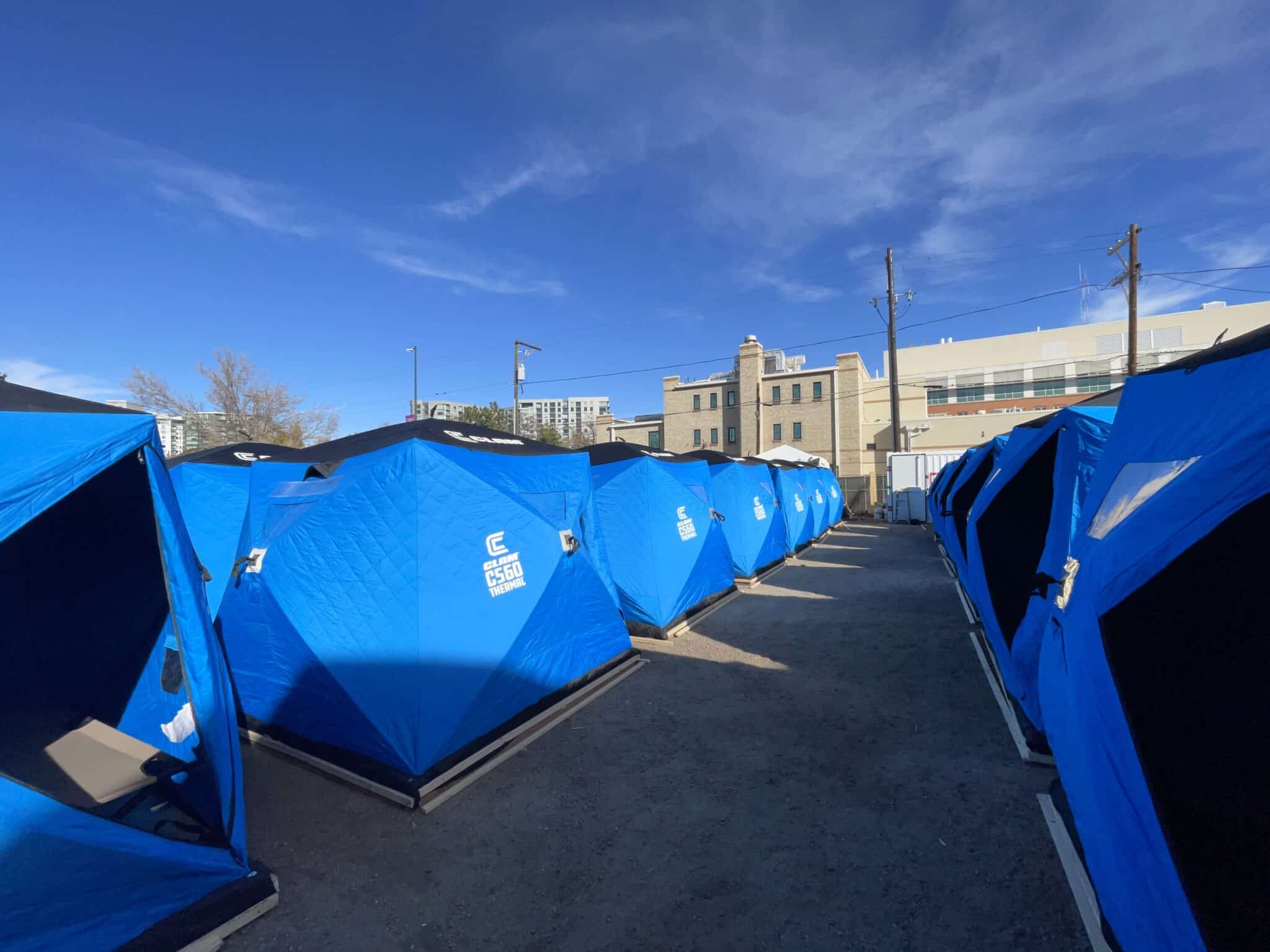 Ice fishing tents, similar to the ones shown here at the 780 Elati St. homeless campsite, will be used to temporarily shelter people at the Clayton neighborhood campsite.

“I think we’re all compassionate people, and we’re all concerned about the community and the people that live within our community, and especially those that need help, like the homeless,” Kennedy told BusinessDen on Friday. “I just don’t believe that we should … give these people a handout when we could be giving them a hand up.”

Kennedy said there was not much transparency from the city when it was planning to allow the site to operate.

“We don’t have any visibility into the real operations and what kind of problems that they have in these places,” Kennedy said. “What I’m trying to do is just pose legitimate, serious concerns for safety, and the children of that community.”

Kennedy said the owners have been trying to do various residential developments on the properties, including joining them to allow for a multifamily project. But the zoning application was denied by the city and he said the group has had to come up with other ideas.

Cole Chandler, executive director of CVC, said the appeal caught him off guard because the feedback he’d received from neighbors prior to opening was positive.

“We were very surprised to receive that appeal because there was absolutely no pushback whatsoever from the neighborhood,” Chandler said. “We feel like the neighborhood is really supportive of that project, and we’re happy to be there and hope the appeal goes as smoothly as possible.”

CVC reached a “good neighbor” agreement with Clayton United. It wasn’t able to reach the same kind of agreement with the neighborhood group in Lincoln Park.

The sanctioned campsites were allowed to operate starting in late 2020 to protect homeless people from COVID-19, giving them a place to adequately socially distance themselves.

But in recent months, they’ve emerged as a way for the city to temporarily shelter some of the hundreds of people living on Denver’s streets.

A homeless encampment opened at the city-owned property at 3815 N. Steele St., adjacent to the Denver Human Services east branch, which can shelter up to 60 people. (BusinessDen file photos)

“We don't have any visibility into the real operations and what kind of problems that they have in these places,” said Michael Kennedy, citing safety as a reason to close it.