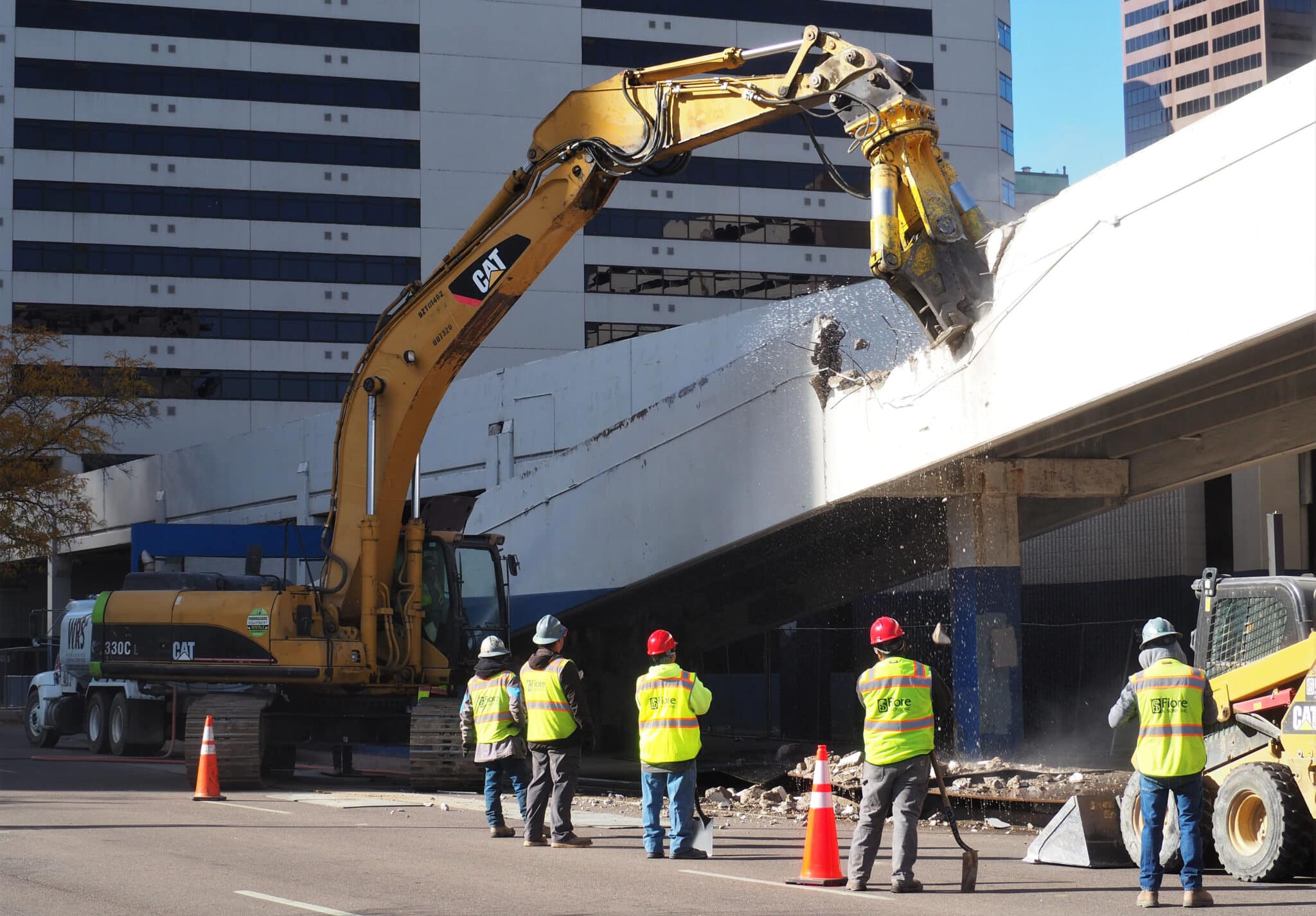 A crew began tearing down the ramp to the upper-level parking of the former Greyhound Station along Curtis Street on Wednesday. (Thomas Gounley photos)

Greyhound’s former bus station in downtown Denver is coming down.

Crews began demolishing the single-story structure topped with a level of open-air parking at 1055 19th St. this week, a little over a year after the Dallas-based transit company stopped using it.

The Denver Bus Center building, which spans a full city block, dates to 1975. Greyhound put the property up for sale in April 2019, and vacated the structure at the end of September 2020, shifting its downtown service to Union Station. 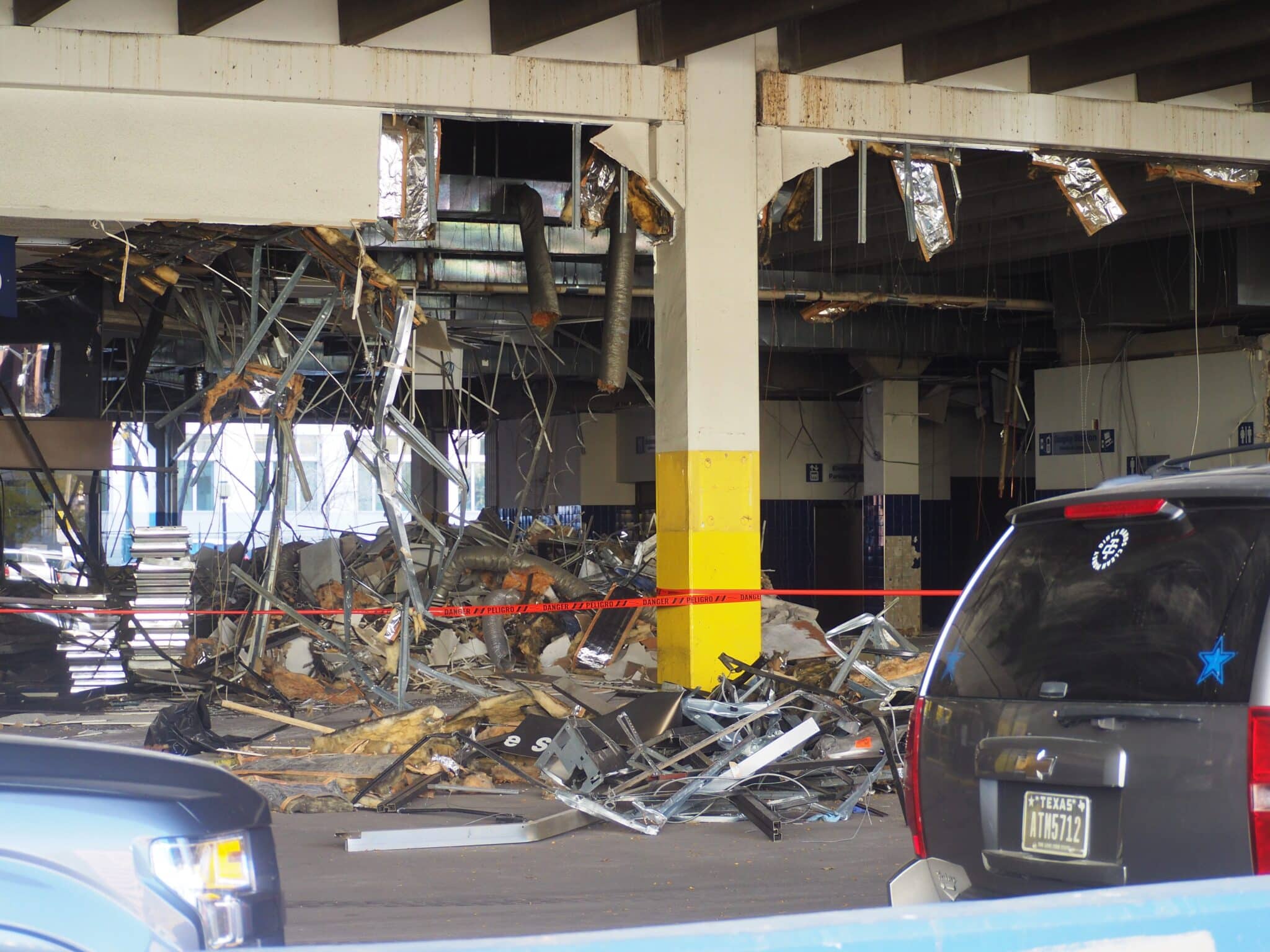 A view of the former Greyhound station’s interior from Arapahoe Street on Wednesday.

Michael Glazier, Golub’s senior vice president of the western region, told BusinessDen demolition won’t be completed until after the new year, because work will be paused during the holiday season.

Then, the lot will sit undeveloped for a while.

In June, Golub and Rockefeller submitted a concept plan calling for two 400-foot towers on the site, one office and one residential. One structure would top out at 38 stories and the other 28, according to the plans, because floors in office buildings generally have higher ceilings than residential ones. The base of the structures would have restaurant and retail space.

Glazier noted the companies are still in the concept approval phase, and will have to submit a more detailed site development plan for the project after that. He said construction could potentially begin in the first quarter of 2023.

Glazier said the residential component of the project would be apartments, not condominiums — and that combining the office and residential uses gives the project a “live-work-play” feel that fits in with the urban context. 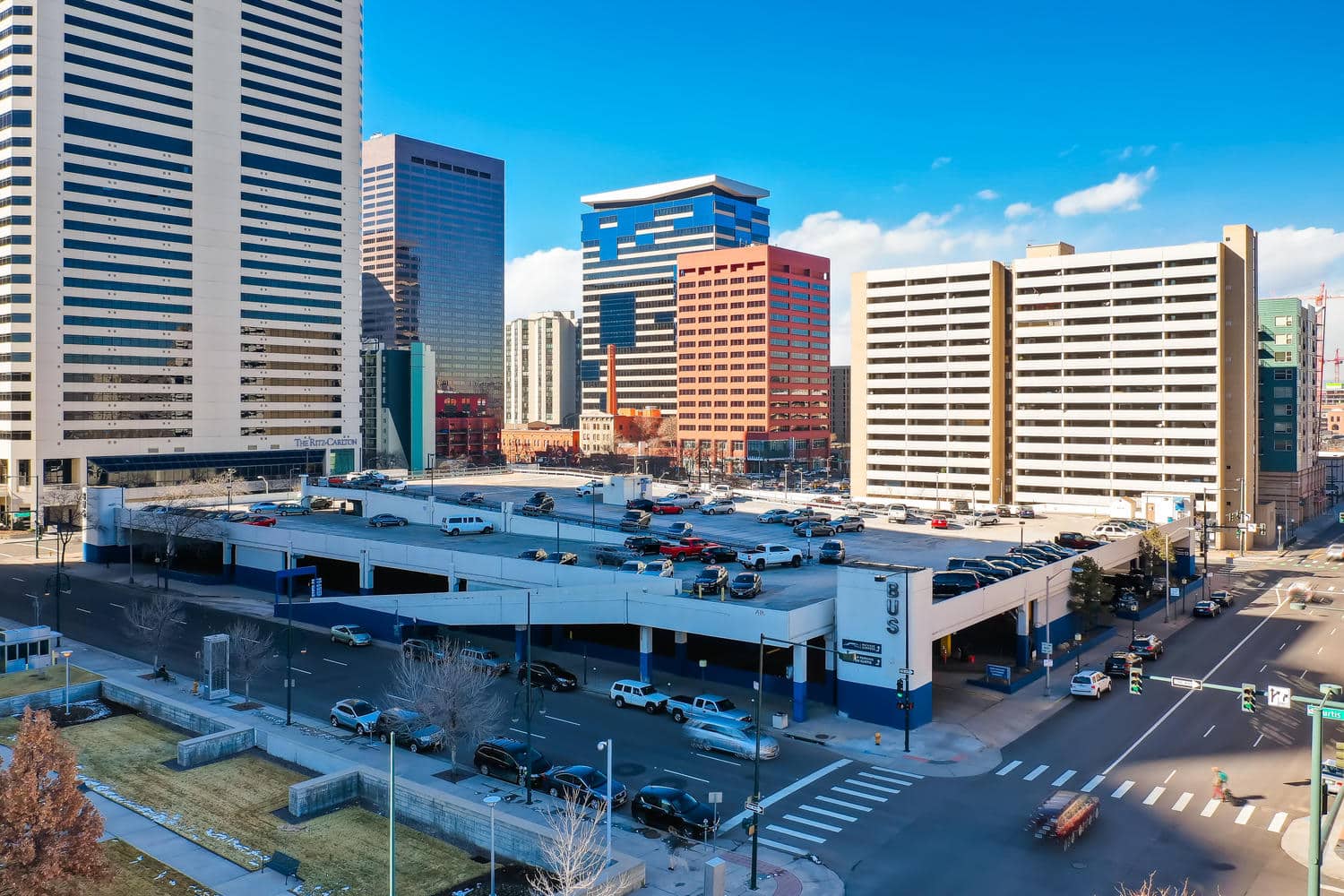 “From an investment standpoint, it’s diversification,” Glazier said. “We also think there’s a market in downtown for best-of-class office. We’re not the only ones chasing that opportunity.”

Glazier recently took over as the head of Golub’s Denver office, moving from Chicago. The firm has become a major player in the Denver development scene.

It and Denver-based Formativ own land by RTD’s 38th and Blake station, where they planned an office building that would be anchored by World Trade Center Denver. That organization now plans to move to Globeville instead, but Glazier said the companies are still working on bringing office to the site.

“Office is still harder, and RiNo office is harder yet,” he said. “It’s not exactly been proven as an office submarket in Denver yet.”

Golub and Formativ also own about 17 acres in RiNo’s Denargo Market area, after adding to its holdings with a $22 million deal last week. Glazier said the company plans to ask the city to rezone that site.

Greyhound, meanwhile, has also been working to sell real estate it owns in Five Points.

A crew began tearing down the ramp to the upper-level parking of the former Greyhound Station along Curtis Street on Wednesday. (Thomas Gounley photos)

Office and residential buildings up to 400 feet high have been proposed but need approval, so construction won't start anytime soon.