The view of downtown from the site of a proposed 36-story tower in LoDo. (Thomas Gounley photo)

Plans for a 36-story apartment tower along Speer Boulevard near Larimer Square are back on, nearly three years after first being proposed.

San Antonio-based developer Kairoi Residential resubmitted plans to the city this week for a project at the corner of Speer Boulevard and Market Street, on the block at the edge of LoDo known as Bell Park.

Kairoi executives did not respond to requests for comment.

Geller told BusinessDen Thursday that Kairoi is back under contract — but this time for a long-term ground lease of the site, as opposed to a purchase.

“Now it’s a ground lease,” Geller said. “That helps their numbers a lot.”

The plans submitted this week are very similar to the company’s original proposal for the site. 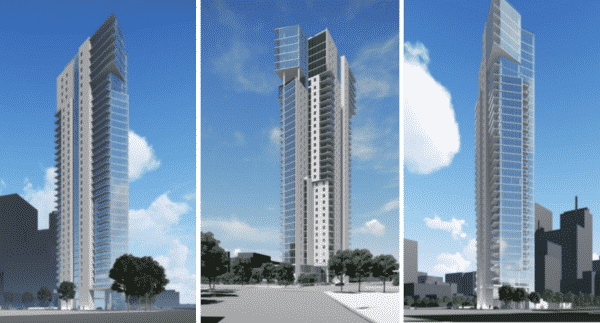 Renderings of the planned apartment tower. (Courtesy of Kairoi Residential)

“The time expired on the approvals they did get, so they had to resubmit stuff,” Geller said.

The block where the structure would be built is split in two by the Cherry Creek bike path. Both sides are currently a parking lot. The site is referred to as Bell Park because it’s home to the bell from Denver’s first city hall, which occupied the site until it was demolished in 1936.

The plan from the start has been for Kairoi to build its tower on the Speer half of the block, and for a five-story office building to be constructed on the 14th Street side of the block, closest to Larimer Square. As part of the deal, Geller would be given ownership of the office building.

He said this week that is still the general plan.

“To me, it’s just a slam dunk,” Geller said of the planned office building. “It’s a perfect location for retail on the bottom and office above.”

Geller is also under contract to sell a parking lot along 19th Street between Arapahoe and Lawrence streets to Chicago-based Riverside Investment & Developments. The firm has proposed a 30-story office tower there.

In Denver, Kairoi previously developed the Park 17 apartment complex in City Park West. It finished the project last year, and sold it this year. Kairoi also has an apartment project underway at the former site of a hotel in the 1100 block of East Colfax Avenue.

The view of downtown from the site of a proposed 36-story tower in LoDo. (Thomas Gounley photo)