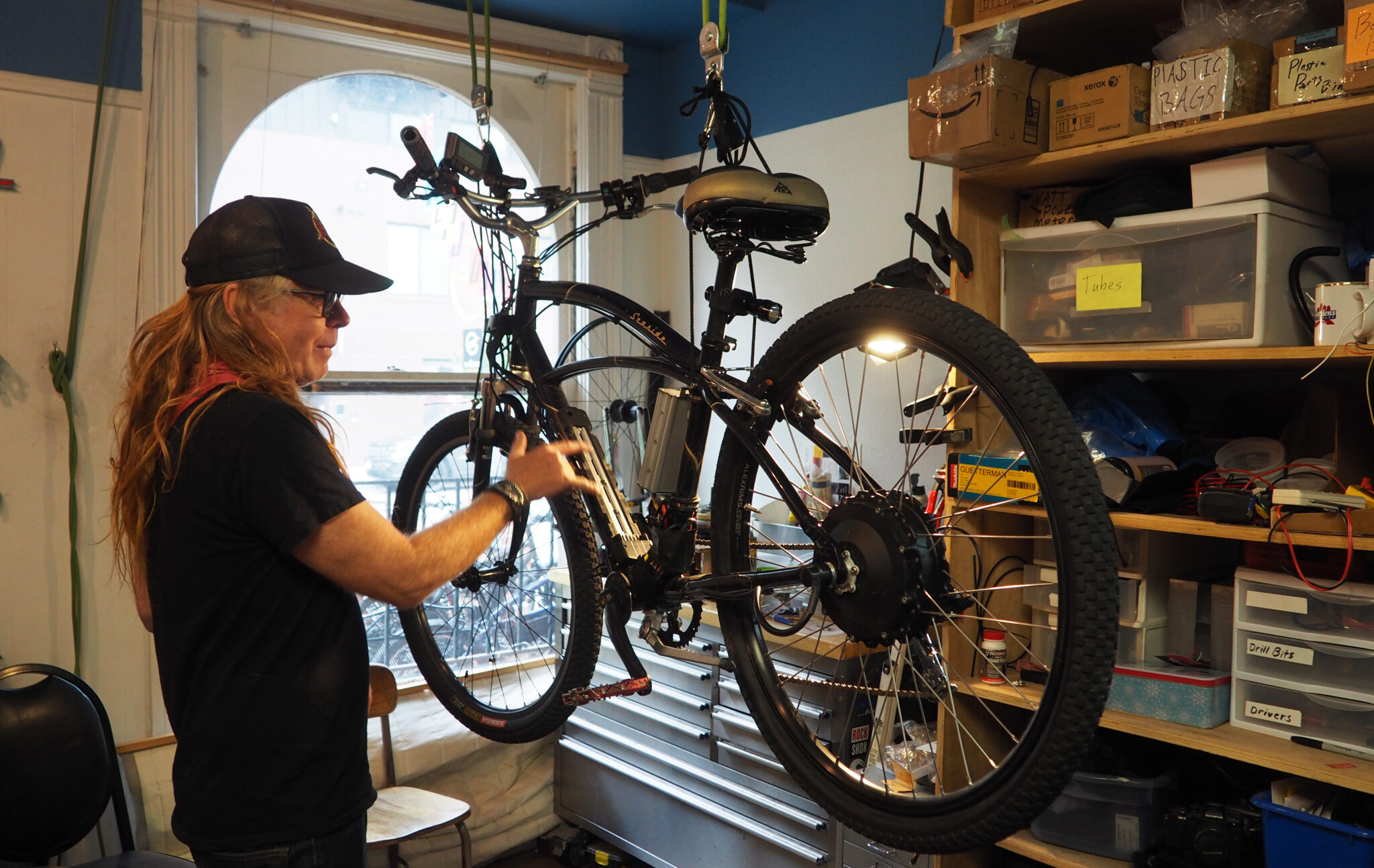 Eric Guetterman converts regular bikes into electric bikes and repairs electric bikes at his home on Tennyson Street as a full-time gig since Elitch Gardens shuttered during the pandemic. (Lucy Peterson photos)

Eric Guetterman has been equipping pedal bikes with motors since 2017.

Guetterman converts pedal bikes into electric bikes by equipping them with motors on an appointment-only basis, working out of his home at 3871 Tennyson St., where he did livestreams during the pandemic lockdowns showing his work.

“I started just really enjoying commuting on my regular bicycle years ago, just from here to downtown,” he said. “But I started focusing on Eforce now that e-bikes are getting so much more common and Tennyson Street is bustling, and my career kind of went away for a year.”

And even prior to the pandemic, interest in e-bikes was on the rise, with new retail storefronts popping up around the Denver area. Voltaire Cycles opened in Highlands Ranch in February 2020. Pedego Electric Bikes opened its eleventh Colorado location last week.

Guetterman, meanwhile, offers an alternative way to go electric, working with whatever bike customers already have.

“I just love the reuse of an old product, instead of just buying something brand new,” Guetterman said. “Especially if you’ve got a bicycle in your garage that you don’t use anymore.” 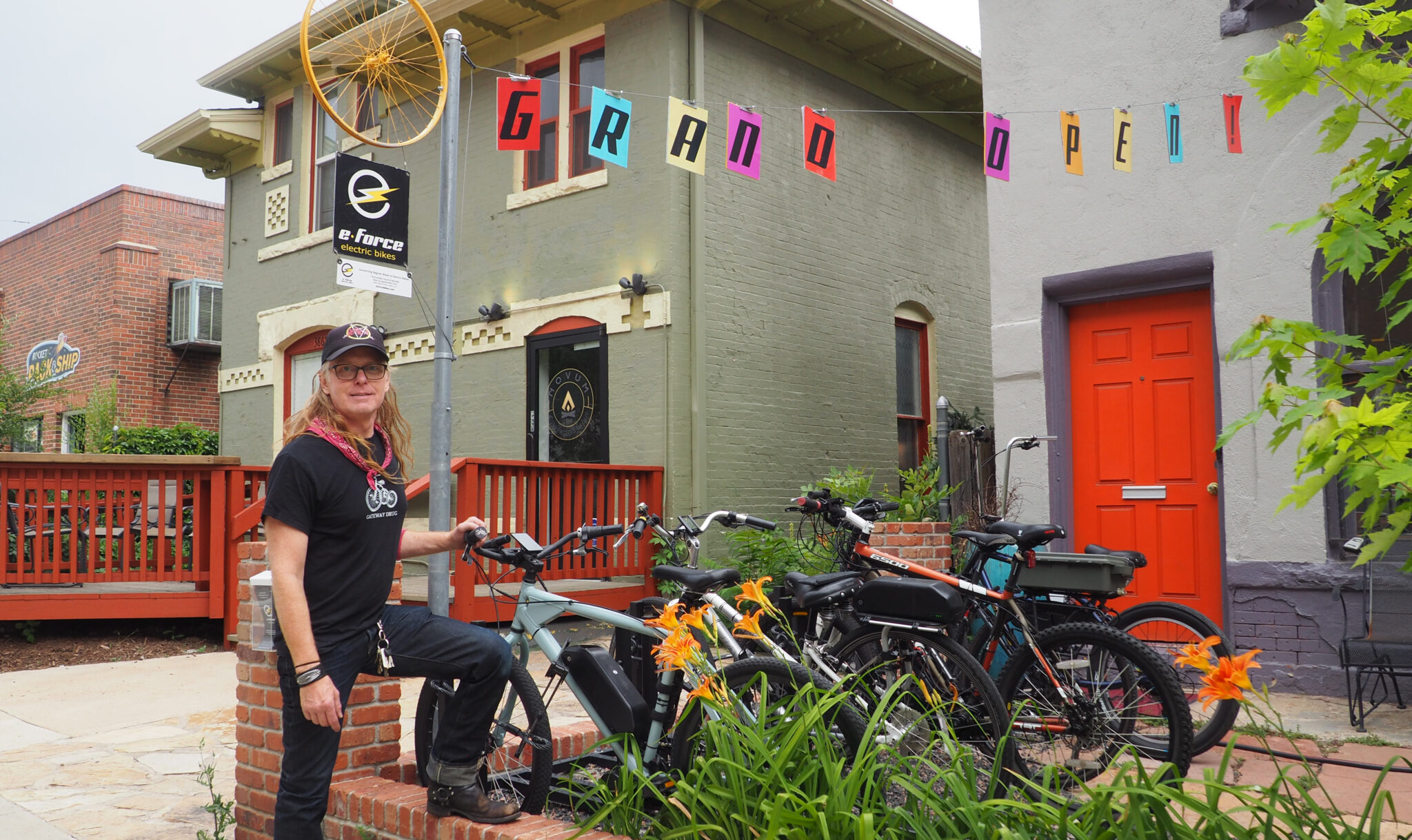 Eforce Bikes offers e-bikes for rent so customers can get a feel for the motor.

Prices for the service range from $1,000 to $1,500, depending on the type of bike and what the rider is looking for, Guetterman said. About $250 of that covers his labor, and the rest the motor.

“Everything Eforce does is custom,” he said. “Custom not because it’s crazy expensive, but because every bike rider is different.”

Guetterman primarily uses motors made by Bafang, a Chinese company that sells its motors individually, as well as to e-bike manufacturers such as Pedego.

“There’s a lot of good and bad on the market,” he said. “That’s why I think Eforce is a nice place to go instead of being overwhelmed with the choices if you’re going to do it yourself.”

Guetterman first heard about e-bikes in 2013, and started learning about the mechanics so that he could convert his own bike. After launching his business part-time, he began seeing clients who purchased electric bikes that needed repairs.

“I get quite a bit of business repairing and upgrading pre-built e-bikes because a lot of bike shops don’t want to work on those e-bikes that aren’t one of their own,” Guetterman said. “I’m also doing some repairs on bikes that were bought brand new at an e-bike store three, four years ago. But now that brand is out of business, so they’re kind of stuck with nowhere to go for repairs.”

He also offers bikes to rent up to a day so customers can get a feel for the motor. Some bikes have mid-drive motors, which are attached between the pedals, while others use hub-drive motors attached to either wheel.

With the exception of a part-time employee during the height of the pandemic in 2020, Guetterman has been upgrading bikes by himself since he launched Eforce.

He’s hoping to hire one or two more employees to help expand his services. And though he’s only working on bikes people own already, he would like to begin selling his own frames to customize with the customer’s choice of motor in the future.

Eric Guetterman converts regular bikes into electric bikes and repairs electric bikes at his home on Tennyson Street as a full-time gig since Elitch Gardens shuttered during the pandemic. (Lucy Peterson photos)