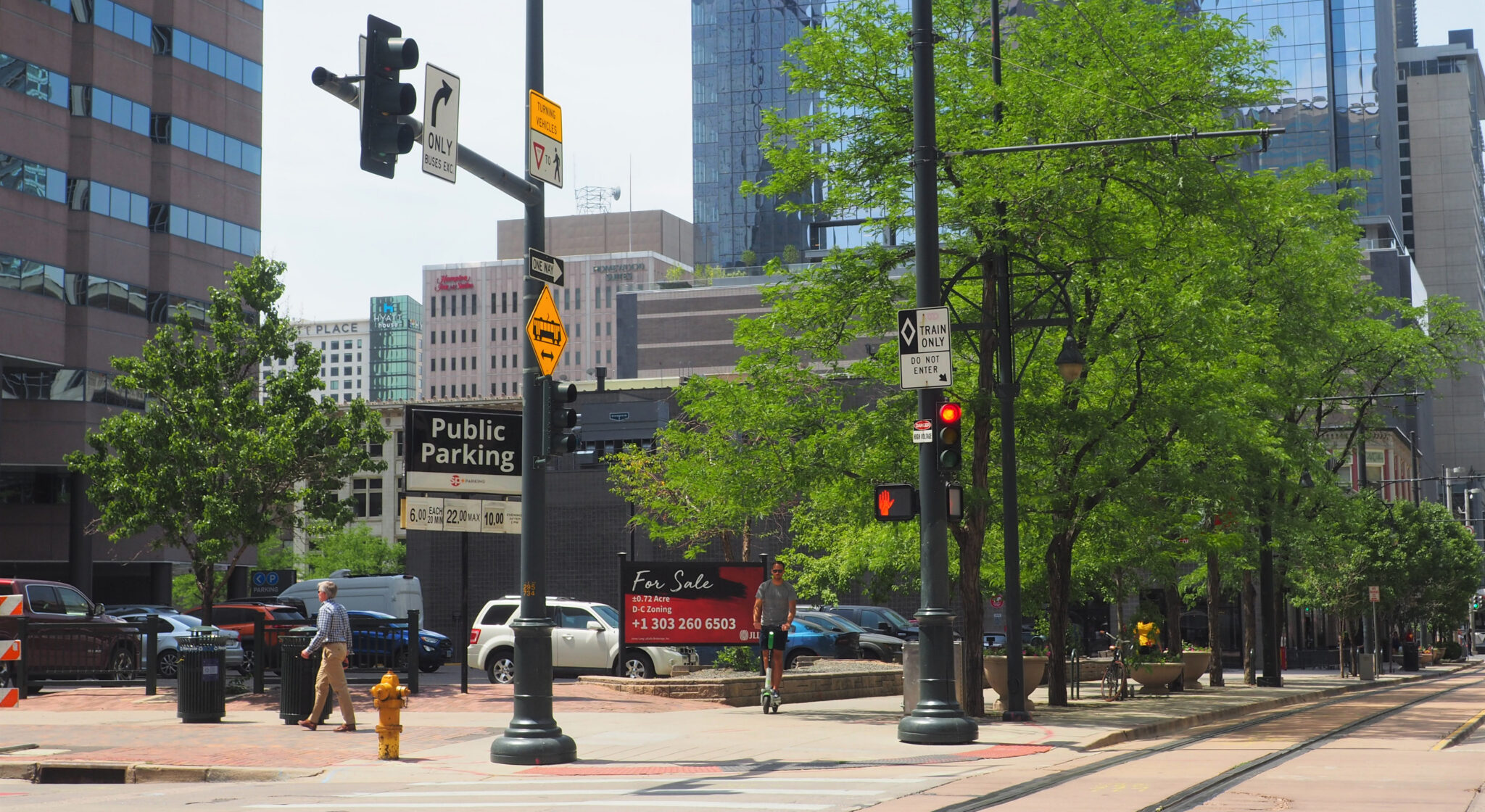 The corner of 17th and California streets in downtown Denver is back on the market. The seller is a developer who paid $17.5 million for the 0.57-acre site in 2019. (Thomas Gounley photo)

A prominent downtown Denver parking lot is again up for sale, less than two years after selling to a buyer based in the Boston area.

The lot at 650 17th St. is being marketed by JLL, according to the brokerage’s website, which features two flashy videos that describe the site as “the heart of Denver” and visualize a sleek tower on it.

Harbinger Development paid $17.5 million, or $699 a square foot, in August 2019 to buy the 0.57-acre acre lot at 650 17th St. from Buzz Geller’s Paradise Land Co. Harbinger, led by Eamon O’Marah, has primarily developed hotel and multifamily projects, all of them outside Colorado.

The 650 17th St. lot gained prominence in early 2018 when New York-based Greenwich Realty Capital submitted a development proposal to the city proposing an 81-story tower at the site, which if constructed would have been Denver’s tallest building. Greenwich was under contract for the site but failed to close, which eventually led to the sale to Harbinger.

The second parcel is owned by Franklin Street Properties, which is also based in the Boston area. Franklin Street gained control of the parcel as part of its $154 million deal in 2016 for the Dominion Towers office complex, which sits just to the south.

The listing doesn’t include a price, and indicates offers are due and a potential buyer will be selected in the coming weeks. Harbinger is also open to opportunities beyond just a straightforward sale, such as bringing in a company that would co-develop a project as part of a joint venture.

As part of the offering, Harbinger has conceptualized a specific structure that it says could be built at the site: a 60-story building with 535 residential units as well as parking and retail space.

That’s the tower seen in the videos. The hypothetical structure has not been submitted to the city’s development review process, records show. And a new owner could have a different idea in mind for the future of the site.

Back in 2019, Harbinger had an option to purchase or otherwise control another parcel on the same block, 601 16th St., which is owned by an entity managed by Denver’s Evan Makovsky. But Harbinger has since removed a reference to that site from its website.

The corner of 17th and California streets in downtown Denver is back on the market. The seller is a developer who paid $17.5 million for the 0.57-acre site in 2019. (Thomas Gounley photo)

A developer made headlines in 2018 by proposing what would have been Denver’s tallest building at 650 17th St. The seller paid $699 a square foot for the 0.57-acre lot.