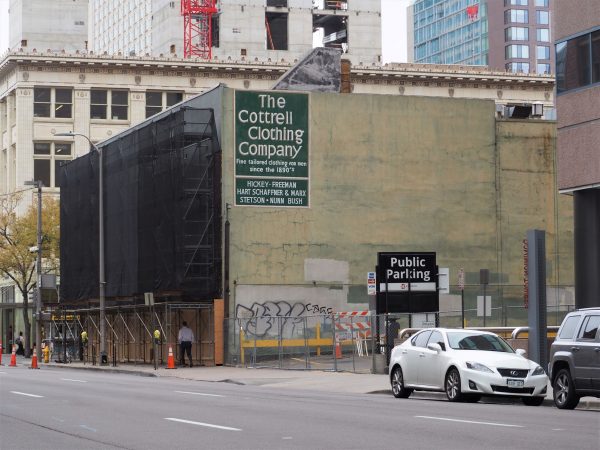 The Cottrell building at 601 16th St. is slated to be demolished. (Thomas Gounley)

The Boston-based development firm that purchased a high-profile downtown Denver parking lot in August says it also controls another site on the block.

That address is home to the two-story Cottrell building, whose sole tenant, a gift shop, closed this year. Scaffolding is up on two sides of the building, and the city is processing a requested demolition permit for the building. It was awarded a certificate of nonhistoric status in 2015.

There is no indication in public records that the property has sold. Records show that the site is owned, as it has been since 2015, by Kin Yon LLC, an entity managed by Evan Makovsky, managing partner of NAI Shames Makovsky.

Makovsky is familiar with ground leases. In January 2015, he leased the nearby site where office tower Block 162 is under construction to developer Patrinely for 99 years.

Asked about a possible ground lease at 601 16th St., Makovsky said in a late Tuesday email “we have entered into an option agreement,” without providing further details. Harbinger, led by Eamon O’Marah, did not respond to requests for comment.

Harbinger’s website said the company plans to develop an approximately 315,000-square-foot mixed-use project at 601 16th St. The site is approximately 15,000 square feet, or 0.34 acres, which would indicate a project of that size likely would be at least 20 stories.

As for the 650 17th St. lot, which gained prominence when a New York-based developer floated constructing the city’s tallest building on it, Harbinger said online it plans to develop an approximately 750,000-square-foot mixed-use project on it.

The site is approximately 25,000 square feet, or 0.57 acres, which would indicate a project of that size likely would be at least 30 stories.

The city has not received development proposals for either site, according to online records.

Two other companies own property on the block. Denver-based Gart Properties owns the retail property at 1600 California St., where Target operates. And Massachusetts-based Franklin Street Properties owns the Dominion Plaza office towers at 600 17th St., as well as a strip of land used for parking next to the 650 17th St. lot.

Dennis McGillicuddy, a director with Franklin Street Properties, is also a partner in Harbinger Development, according to the companies’ websites.

The Cottrell building at 601 16th St. is slated to be demolished. (Thomas Gounley)

Harbinger Development paid $17.5 million in August for 650 17th St. But its website indicates it struck another deal before that.