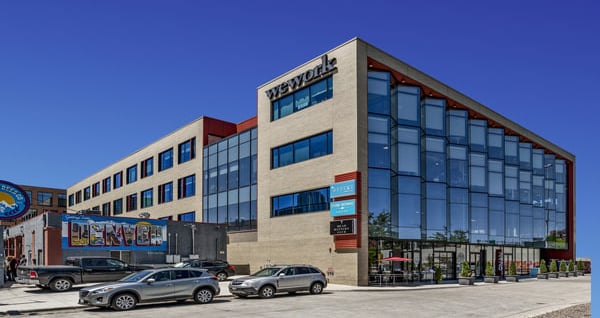 WeWork has reopened its location in The Lab building at 2420 17th St. (BusinessDen file)

The company had closed the location, along with three others in Denver, at the end of February.

“Earlier this year, we moved members out of The Lab in anticipation of exiting that location,” a WeWork spokesperson said in an email. “However, due to high demand in this neighborhood, we are excited to be reopening The Lab and welcoming members to the refreshed location.”

The Lab is adjacent to Circa, another building in which WeWork has a location. Both are along Platte Street in LoHi.

The other three Denver locations that WeWork closed in February remain closed. They were within The Vault at 821 17th St., The Hub at 3601 Walnut St. and Civic Center Plaza at 1560 N. Broadway.

The reopening brings WeWork back up to six locations within Denver. The company, which signed its first Denver leases in 2015, had nine locations up and running in the city at its peak.

WeWork also never opened in three additional Denver buildings for which the company announced leases in 2018 and 2019. It sued the owner of one of those buildings in January; that litigation remains unresolved.

Other recent changes in the Denver coworking scene include Venture X’s acquisition of the Modworks space at 110 16th St. and Flex Office – Denver’s takeover of CTRL Collective’s space in the Dairy Block at 1800 Wazee St.

WeWork has reopened its location in The Lab building at 2420 17th St. (BusinessDen file)

The New York-based coworking company decided to give The Lab building at 2420 17th St. new life because of “high demand” in the neighborhood.