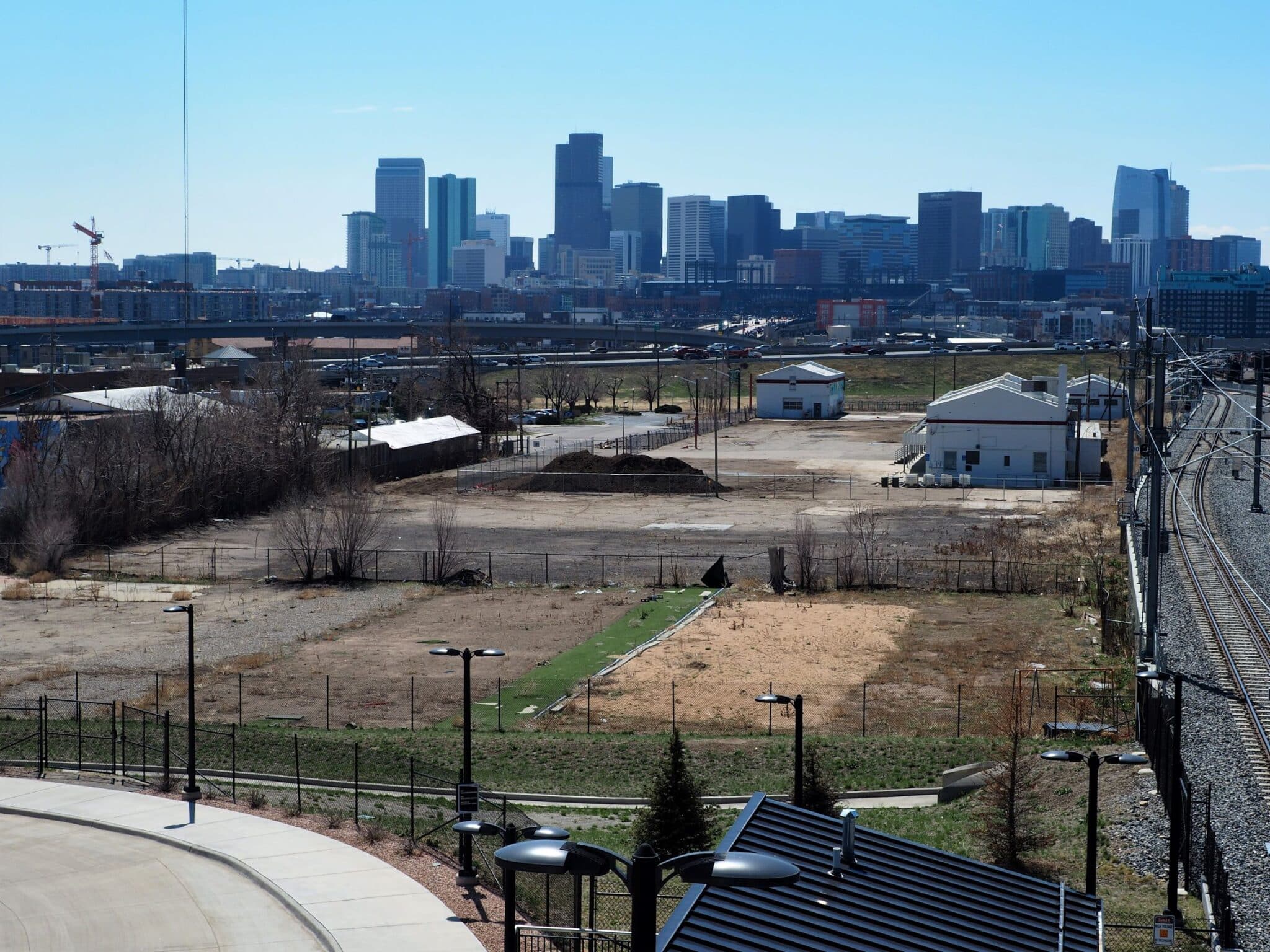 The lots planned for apartments, in the foreground here, are just south of the RTD’s 41st and Fox rail station. (Thomas Gounley photo)

A pair of local developers have unloaded their site by a Globeville rail station to a New York-based firm planning apartments.

Brue Baukol Capital Partners and LCP Development, both Denver-based firms, were paid $16.1 million last week for the 689 and 725 W. 38th Ave. parcels, according to public records.

The parcels, which add up to about 3.9 acres, are just south of RTD’s 41st and Fox station.

The buyer was AMFP V Fox Station LLC, which is affiliated with Abacus Capital Group.

A local executive with the firm did not respond to a request for comment, but plans submitted to the city last year indicate Abacus wants to develop three five-story apartment complexes at the site, with about 300 units in total. There would also be an eight-story garage.

Some infrastructure work needs to take place ahead of redevelopment, notably the extension of 40th and Galapago streets into the site, the plans indicate.

Brue Baukol and LCP, acting as Fox Station I LLC, purchased the lots in July 2016 for $12.7 million, records show. LCP Managing Partner Jonathan Bush told BusinessDen that the companies then successfully requested the city rezone the properties to C-MX-20, which allows mixed-use development up to 20 stories.

There are currently a handful of industrial buildings on the lots, which Bush said are vacant.

So far, most of the redevelopment that has occurred around the 41st and Fox Station has occurred in Sunnyside, on the opposite side of the railroad tracks, which can be crossed by a pedestrian bridge.

The largest project there is Golden-based Confluence Cos.’ Zia Sunnyside, a 434-unit project that was supposed to feature both apartments and condominiums, only to see Confluence nix the latter last year. Denver-based Prime West also bought a site one block north in late 2020 for an apartment project.

Back on the other side of the tracks, just south of the site purchased by Abacus, Jason Winkller’s Q Factor in 2019 proposed a big-box store topped by office and residential towers.

Brue Baukol, meanwhile, also held a groundbreaking ceremony on Wednesday to mark the start of construction on The District, a 36-acre mixed-use project located next to RTD’s Dry Creek Station in Centennial. When fully built out, the project is expected to have 2.5 million square feet of office space, a 200-room hotel, 1,800 residential units and 30,000 square feet of retail space, according to the firm.

The lots planned for apartments, in the foreground here, are just south of the RTD’s 41st and Fox rail station. (Thomas Gounley photo)