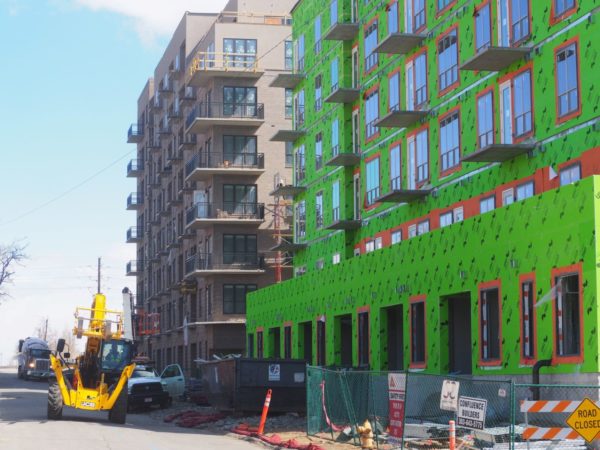 A May photo of the Zia Sunnyside project. (Thomas Gounley photo)

A massive project in Sunnyside that was supposed to contain both apartments and condos has nixed the latter.

Tim Walsh, CEO of Golden-based Confluence Cos., said the decision was made in September to rent all the units within the company’s Zia Sunnyside project.

“We were not getting any traction with selling condos,” he told BusinessDen. “There does not seem to be much of an appetite for buying urban condos in a high-rise building in the midst of COVID.”

The Zia project takes up an entire city block, and is adjacent to a pedestrian bridge that leads to the 41st and Fox commuter rail station. The project, which has 434 residential units, broke ground in 2018.

The first phase, which has 120 apartments, was completed in September, and about 40 are occupied, Walsh said last week. The remainder of the structure will be finished by the end of the year.

It’s no secret that the condo market has been lackluster lately. It’s the one component of the local residential real estate market that has failed to take off since the start of the pandemic.

Buyers are seen as wanting more space and more separation from their neighbors, given many are working from home. And many condos are in the core of downtown, which is less vibrant than normal because the pandemic has canceled events and driven office workers away.

And Walsh said he’s concerned that the current condo trend “is going to continue beyond recovery from COVID.”

“We believe the growing trend among all demographic groups (young professional to empty nesters) is they prefer the flexibility of leasing an apartment versus the commitment of buying a condo,” Walsh said. “With the quality and amenities of the modern luxury apartments, a resident gets all the benefits of living in an urban environment without the commitment and risk of buying and selling a condo.”

Prior to the pandemic, some developers shied away from building condos because of fear of litigation, which the state legislature tried to address. Condos are seen as more attainable to first-time buyers than single-family homes, given their generally low price point.

Another project no longer seeking individual buyers is Satori Residences, a 24-unit project at 950 Lincoln St.

The building, which has yet to be occupied, sold earlier this month for $10.8 million, according to public records. CBRE, which represented the buyer in the deal, said in a news release last week that the project’s units were originally built to be sold individually, but that is no longer the plan.

A May photo of the Zia Sunnyside project. (Thomas Gounley photo)

“We were not getting any traction with selling condos,” said Tim Walsh, CEO of Golden-based Confluence Cos.