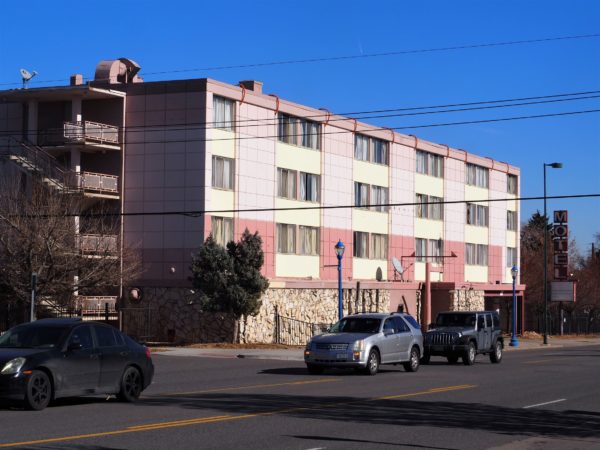 The All Inn Motel is located at 3015 E. Colfax Ave. in Denver. (Thomas Gounley)

Change wants to check in at the Colfax motel that once was home to nightclub Rockbar.

Inspire Investment Group, which purchased the All Inn Motel building at 3015 E. Colfax Ave. at a bankruptcy auction in 2016, wants to renovate the existing four-story building and add a new structure at the southeast corner of the property.

The company submitted a site-development plan to the city last week, detailing the changes.

The existing building has 54 rooms, as well as the ground-floor restaurant space previously used by Rockbar, which closed in 2012 after seven years when the city opted not to renew its liquor license.

The proposed new building also would be four stories, according to the plans. It would have about 1,200 square feet of retail space on the ground floor and 27 rooms on the upper three.

A new pool area would separate the two buildings.

Brian Toerber, majority owner of Inspire, declined to comment on the submission. When Inspire purchased the building in 2016 for $3.55 million, Toerber said he was considering converting the structure to microunits and interested in adding a fifth story.

Earlier this year, Inspire sold two apartment buildings a few blocks west on Colfax, one new and one freshly renovated, for $19 million.

The All Inn Motel is located at 3015 E. Colfax Ave. in Denver. (Thomas Gounley)

The current owner bought the property at a bankruptcy auction in 2016.