All five businesses are slated to open next summer, according to a press release. Denver-based HM Capital is behind the project, which broke ground in January.

The Knotty Kids Salon, a full-service salon for kids, will be moving its 2-year-old business from 8384 Northfield Blvd. in Stapleton to the Park Hill development, according to a post on its Facebook page. The post said that the new space also will include a quieter room for children with sensory issues.

The Park Hill outpost will be a second location for Body in Motion Chiropractic, according to the press release. The practice’s original offices are located inside Runners Roost, a running shoe store, at 1685 S. Colorado Blvd. 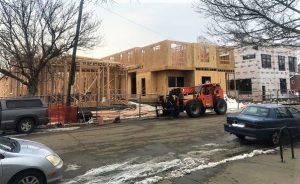 Park Hill Commons developer HM Capital previously told BusinessDen that the project will include a total of 14 retail spaces, ranging in size from 250 to 2,000 square feet.

The development is also slated to incorporate new residential units, office spaces and retail, all centered around a park.

Park Hill Commons is being developed by Denver-based HM Capital.