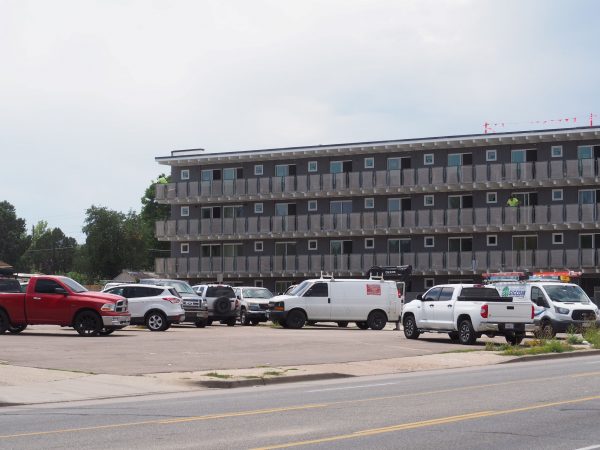 The developer finalizing the conversion of former assisted-living facility along West Colfax into condos now has a vision for the parking lot across the street.

The 0.43-acre corner lot is across Vrain Street from the former Golden Manor assisted-living facility, which Flywheel has spent the past year renovating into a condo project dubbed Circa West. 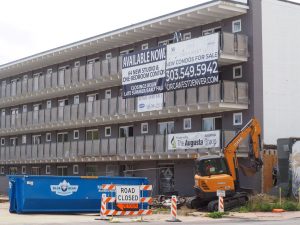 Across the street, Flywheel is finishing up its conversion of a former assisted-living facility into condo project Circa West.

Flywheel acquired the parking lot in late 2017 at the same time it bought the Golden Manor building. The $6.6 million deal also included a lot west of the building, at the southeast corner of Colfax Avenue and Winona Court. No redevelopment plans have been submitted for that site.

The proposed building at 4550 W. Colfax would have retail space on the ground floor facing Colfax Avenue, with parking behind that and in one basement level — 45 spaces in all. The residential units would be on the upper four floors. A majority of the units would be studios and one bedrooms, with a handful of two-bedroom units as well.

Hrouda said he’s still determining whether the units will be for rent or for sale. He hopes to break ground in the first half of 2020.

In the meantime, Circa West will be completed. Hrouda said work is expected to wrap up around Labor Day.

Circa West has kept the unit mix from the building’s assisted-living days: 57 studios and seven one-bedroom units. While the units are listed at market rate, their relatively small size has resulted in list prices that Hrouda describes as “attainable” — from $175,000 for the smallest studios up to the $370,000 range for the largest one bedrooms.

“I’m proud of that project, because of the price point,” said Hrouda, a Denver native.

He said about 15 percent of the units have been sold, and “we expect activity to increase as we get closer to completion.”

Circa West also has two retail spaces on the ground floor. Hrouda said no leases have been signed.

Flywheel Capital also has purchased a number of properties at Interstate 25 and Evans Avenue for redevelopment.

Flywheel Capital has spent the past year renovating a former assisted-living facility.

This housing construction has to be stopped by the government at some point! It’s getting out of control!