CREA-Flywheel Evans LandCo LLC, affiliated with Denver’s Flywheel Capital, purchased $13 million worth of property near the Interstate 25-Evans Avenue interchange, including both sides of the 2100 block of South Cherry Street. (Thomas Gounley)

More change is coming to the northern reaches of University Hills.

A developer spent more than $13 million last week on property at the Interstate 25-Evans Avenue interchange, acquiring office buildings, an English language school and a church while taking control of both sides of a dead-end street. 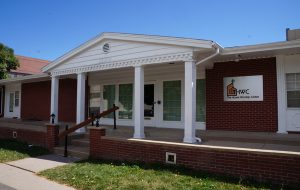 The purchase included the building at 2150 S. Cherry St., which is used as a church by The House Worship Center. (Thomas Gounley)

The acquisitions add up to about 3.4 acres.

The LLC is affiliated with Denver’s Flywheel Capital. Flywheel Managing Director Ben Hrouda did not respond to a request for comment Wednesday.

Ron Allum of Occam Real Estate and Bill Trinen of Trinen Realty Partners represented both sides in the sale of 2100, 2135 and 2175 S. Cherry St.

Allum said the properties were bought to be redeveloped, but that he didn’t have specifics regarding what will be built. No redevelopment proposals have been submitted to the city.

Allum also said the new owner could request the city vacate the portion of Cherry Street running between the properties, which would allow for more developable space.

Here is a rundown of the LLC’s holdings in the area:

Use: 100 percent occupied by Sandstone Care until October 2020

Sold for: $7.75 million in conjunction with next two parcels 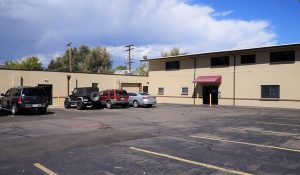 The 10.733-square-foot industrial building at 2175 S. Cherry St. was another one of the LLC’s purchases. (Thomas Gounley)

Use: Home to The House Worship Center, a church

Use: Home to LCI Language Centers, an English language school 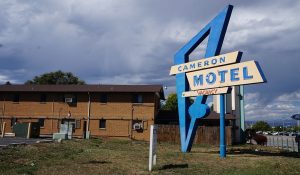 The properties are just east of the Colorado Station light-rail stop. About four blocks to the west, a 350-unit apartment complex is under construction, as are another 52 units at the former site of a car wash.

Hrouda and partners are also converting a former assisted-living facility along West Colfax Avenue into condominiums, and constructing more condos at the site of the former Broadway Hotel, at 1616 S. Broadway in Denver.

CREA-Flywheel Evans LandCo LLC, affiliated with Denver’s Flywheel Capital, purchased $13 million worth of property near the Interstate 25-Evans Avenue interchange, including both sides of the 2100 block of South Cherry Street. (Thomas Gounley)

The LLC affiliated with Denver’s Flywheel Capital now owns a motel, church, office buildings and both sides of a dead-end street.