A Belcaro mansion built to showcase art — and once mentioned in the Financial Times — has changed hands, grabbing the title of priciest home to sell in the Denver metro area in April.

According to the Financial Times — which mentioned the publication in a 2015 story in its “How to spend it” section — Chambers and ex-husband Hugh Grant hired Seattle architect Jim Olson to design the home around the couple’s extensive collection of 20th-century decorative art, which included paintings by Henri Matisse, Vance Kirkland and Roberto Matta.

The listing for sale said a two-story central art gallery divides the structure between public and private spaces.

The focus on art makes sense, given the sellers. Chambers and Grant, who were married from 1989 to 2017, were key players in the creation of Denver’s Kirkland Museum of Fine & Decorative Art. After his death in 1981, artist Vance Kirkland willed his estate to Grant, a family friend. Grant eventually became founding director and curator of the museum, which opened in 2003, according to its website.

The museum moved from its original site at 1311 N. Pearl St. in Cap Hill to 1201 Bannock St. in the Golden Triangle last year. The Pearl Street location then was renovated into a private residence, now used by Grant. Chambers’ private foundation, Merle Chambers Fund, provided the funding for the new museum, its website said.

Birnbaum also appears interested in fine art: He chairs the Museum Committee for the Colorado Springs Fine Arts Center, and serves on acquisition committees for both London’s Tate Museum and the Denver Art Museum, according to a bio on Griffis’ website.

The finer things: The home was “inspired by the Denver landscape of mountains and great plains,” and includes a two-story art gallery and a living room that opens to its 3.5-acre, professionally landscaped yard. The home was designed specifically to showcase art of various sizes, including a series of glass cabinets for small pieces of art and alcoves in the grand gallery hallway.

Seller: S Elizabeth House LLC, which bought the home in 2004 for $7 million, according to records. The registered agent for the LLC is Merle C. Chambers, a local businesswoman and philanthropist. Chambers formerly headed energy exploration company Axem Resources, for which she became the first woman inducted into the Rocky Mountain Oil & Gas Hall of Fame. Chambers, now president and CEO of private investment firm Leith Ventures, was also the third woman to reach both the North and South Poles. 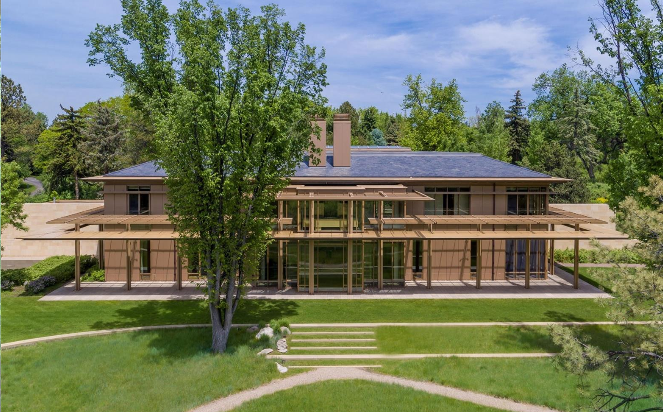 A Belcaro mansion built to showcase art — and once mentioned in the Financial Times — has changed hands, grabbing the title of priciest home to sell…

The “old” Lyeth home location is not in Belcaro. Janet’s home is on South Steel which is in Belcaro Park..