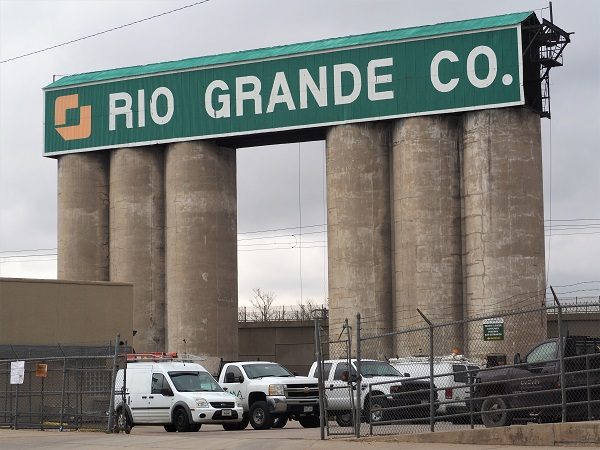 The company that owns the concrete silos at 123 Santa Fe Drive in Denver has applied for a demolition permit. (Photos by Thomas Gounley)

The century-old concrete silos topped with Rio Grande Co. signage along Santa Fe Drive could be coming down.

The building materials company, which owns the site and still operates there, has applied for a demolition permit for the structure, which is set back from the road at 123 Santa Fe Drive in the Baker neighborhood, next to a light-rail line.

In early March, city landmark preservation staff — which reviews all total demolition permit applications — determined that the site had the potential for historic designation. Laura Swartz, spokeswoman for Denver’s Community Planning and Development Department, said the finding kicked off a three-week period during which notice was posted at the site and various community organizations were contacted so that any interested parties could submit a landmark preservation application, which could halt demolition. 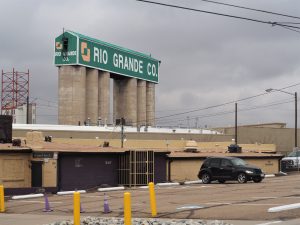 The silos are a unique feature in the Baker neighborhood.

Swartz said Friday, two days after the end of the three-week period, that no one had submitted a preservation application for the silos.

Rio Grande President Dave Wenman did not return a Friday voicemail. Alpine Demolition would perform the work, according to the permit application.

Swedish immigrant Elmer J. Peterson established the Rio Grande Fuel & Feed Co. in 1908, and the company remains in the family. According to a report by city staff, the silos were constructed between 1915 and 1925, and used to store coal. When natural gas heating replaced coal heating in the mid-1900s, the company shifted its focus to supplying construction materials, such as cement, sand and gravel. 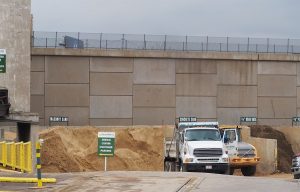 “Due to their height and uniqueness, the silos have become a visually orienting feature within the Baker neighborhood,” city staff wrote in the report.

Other properties currently facing demolition for which the city has found the potential for historic designation are the medical office building at 7060 E. Hampden Ave. (where a new medical building is planned) and the home at 400 S. Monaco St. Pkwy, once part of the homestead of a Colorado Supreme Court justice. Those properties are in the midst of their three-week posting period.

One of the more prominent structures recently demolished in Denver was the research bridge over 9th Avenue that was part of the University of Colorado’s Health Sciences Center. Additionally, a five-story office building in the Golden Triangle is being demolished.

The company that owns the concrete silos at 123 Santa Fe Drive in Denver has applied for a demolition permit. (Photos by Thomas Gounley)

“Due to their height and uniqueness, the silos have become a visually orienting feature within the Baker neighborhood,” city staff wrote in a report.

Well thatz sad. A little working-class honesty in your otherwise drab yet pretentious city. Like the famous Boston Sand and Gravel, famous in the movie Good Will Hunting. The loss of character anywhere diminishes our lives everywhere.

What a ridiculous overreach of government and infringement on personal property rights. I will be glad to see these torn down so that this family owned business can use their personal property in the way that makes the most sense for them and their business. Visually orienting? Give me a break. We no longer navigate by landmarks and just because something is old does not make it worthy of saving. The world is not a museum. This is not some special business that needs government to protect the memory of; the same family still owns and is running it – no remembrance is needed. What a joke.