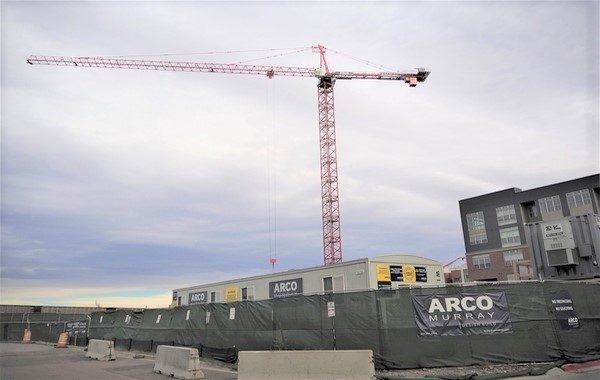 New York-based Property Markets Group wants to build a 12-story apartment complex at 3000 N. Inca St. The site is currently being used to house equipment being used to construct the company’s 12-story project on an adjacent parcel. (Thomas Gounley)

A New York City-based developer that recently began work on an apartment complex near Coors Field wants eventually to build a second one next store.

Property Markets Group submitted a site-development plan in September for 3000 N. Inca St., the second parcel it owns in the isolated neighborhood bounded by 20th and Wewatta streets, which is branded Union Station North.

The company bought the undeveloped 0.49-acre site in May for $3.19 million.

The project would have parking on the first through sixth floors, with a total of 255 spaces. The apartments would be on the seventh through 12th floors, according to the plans, which need city approval.

To the north of the site, at 3100 N. Inca St., Property Markets Group recently began work on a 12-story complex that is slated to have 251 units, according to the approved site plan. The company bought that 1.1-acre parcel in 2017 for $6.87 million.

Both of the apartment complexes are set to be branded X Denver, part of Property Markets Group’s X Social Communities portfolio, according to a company spokesman.

Three X Social Communities have opened, with two in Chicago and one in Miami. In addition to Denver, a Fort Lauderdale location also is planned.

The communities rent both by the unit and by the bedroom, according to the brand’s website; the developer calls the latter “coliving.” Last year, Fast Company dubbed Property Markets’ X developments “upscale dorms for adults.”

Union Station North is a heavily residential area dominated by large apartment complexes, although most are four or five stories, less than half the size of those Property Markets Group has in the works.

Property Markets Group isn’t the only entity thinking bigger. Clark Street Holdings LLC recently proposed a 13-story apartment complex at 2980 Huron St., an industrial site a block away that is currently under contract to be sold.

New York-based Property Markets Group wants to build a 12-story apartment complex at 3000 N. Inca St. The site is currently being used to house equipment being used to construct the company’s 12-story project on an adjacent parcel. (Thomas Gounley)

Property Markets Group recently began construction of a 12-story project on the first parcel it owns in the area branded Union Station North.