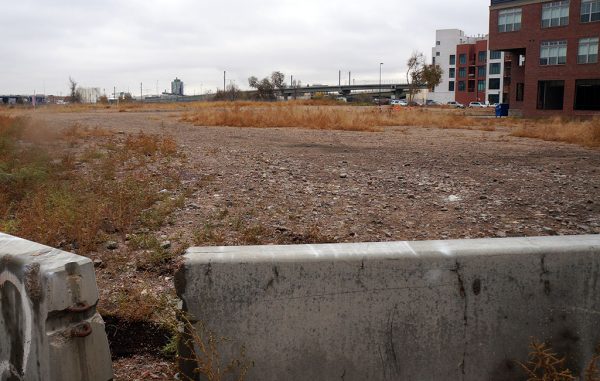 The seller was Denver-based Westfield Co. Partner Randy Schwartz said the company purchased the land more than two years ago with the intent to either develop or sell it.

The vacant site is wedged between Inca and Huron streets and railroad tracks to the north.

Plans on file with the city, which have not yet been approved, show Property Markets wants to build a 384,000-square-foot tower at the site. About 85 percent of the space would be devoted to 319 residential units with one to four bedrooms.

The plans also call for 6,300 square feet of restaurant space and 1,700 square feet for an art studio. The remaining space would be parking.

The blocks immediately surrounding the site primarily consist of four- and five-story structures.

A Property Markets representative did not respond to a request for comment. The company’s website lists offices in New York, Chicago and Miami. A portfolio page does not show any projects in Colorado.

Adjacent to the parcels sold to Property Markets, Westfield still owns about half an acre. Schwartz said it wants to build a five-story parking garage that ultimately could be topped with apartments or condos.

Plans for that structure also still need to be approved by the city.

Of course more apartments (Goody)
Have the New York investor use his money to tear up land in his State, or his front yard!!. NO MORE PEOPLE!

Typical NIMBY. Get with the growth or leave

I am against this use for the site. I feel they did not require enough parking for the very large apartment building to the south of this site, and to add even more people to this already crowded neighborhood would be unwise. It’s next to impossible to find street parking on Huron as it is, and they have not even filled all the apartments in the Huron Apartments. No street parking means no customers for the stores and restaurants already in the area. I live in this neighborhood and have off street parking, not the case for many in our area. We are between a rock and a hard place with growth only able to go up. Please do not over burden this nice urban neighborhood.

I agree. People in this city need to get with the growth or leave. It’s that simple. People here constantly complain about the new growth changing the way they lived. Well guess what people, that’s life. I’m so tired of Denver I can’t wait to get away from this place. No culture. No diversity. Bunch of whiny(Native) babies. SoCal here I come.

My opinion hardly matters, I know. Money will ultimately make this decision as it does with all things in cities/society. Resisting growth to a beautiful city is a waste of energy. The powers that Be will push things forward however they please. You can vote, march, resist, petition, etc, and whatever happens will happen.

An out-of-state investor wants to erect a building to pad his pockets. Bravo. Go ahead. But you want to come in and remove parking spaces to do so? Absolutely not. I oppose this notion fully. I’m not a native. I’ve lived in the Jack Kerouac Lofts for 12 years. Build your wallet, I mean building, but don’t compound the neighborhood’s parking problem. Its a quiet street! It’s full of cars and traffic already!

We know the investor doesn’t need to live here so consider that when thinking about this situation. If the investor is going to take money from the city of Denver, make him pay for EXTRA parking. Not allow the investor to decrease it. Absurd. The investor should be ashamed.

Again, we have no idea how much money is being thrown at the city for this proposal, but we need to oppose it. Buildings will go up. Don’t let the parking get worse.

NIMBY attitudes like those expressed by Mark and Andre lead to increased traffic and congestion, higher rent prices, and hamper efforts to create a more sustainable city. We should focus developer dollars on building places for people to live, not for cars to be stored.

If you value parking so highly i recommend buying the lot yourself so you can park there.