HomeAdvisor will take the top three floors of The Hub. (Thomas Gounley)

HomeAdvisor has upgraded its new RiNo headquarters ahead of moving in.

The Golden-based digital marketplace has finalized a lease for 150,000 square feet in the Hub, up from the 70,000 square feet the firm originally committed to, a company spokesperson confirmed last week.

The Hub is under construction at 3601 Walnut St., and HomeAdvisor will take the top three floors of the eight-story building.

HomeAdvisor, which connects contractors with customers, said the larger lease will allow it to accommodate up to 1,200 employees in the building. The company expects to move in at the beginning of 2019. 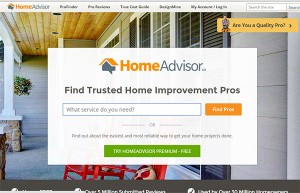 HomeAdvisor is a digital marketplace that connects contractors with customers. (Screenshot)

HomeAdvisor is one of two office tenants committed to The Hub. WeWork recently announced it would take 45,000 square feet on the fifth floor of the building.

On the retail side, Viv Cycle has leased space on the ground floor of The Hub.

HomeAdvisor CEO Chris Terrill recently announced he will leave the company at year-end.

HomeAdvisor recently made headlines for a pair of lawsuits. This summer, a group of home improvement company owners sued HomeAdvisor over leads generated through the site. And last month, Denver radio host Tom Martino sued the company over advertisements on search engine Bing.

HomeAdvisor will take the top three floors of The Hub. (Thomas Gounley)